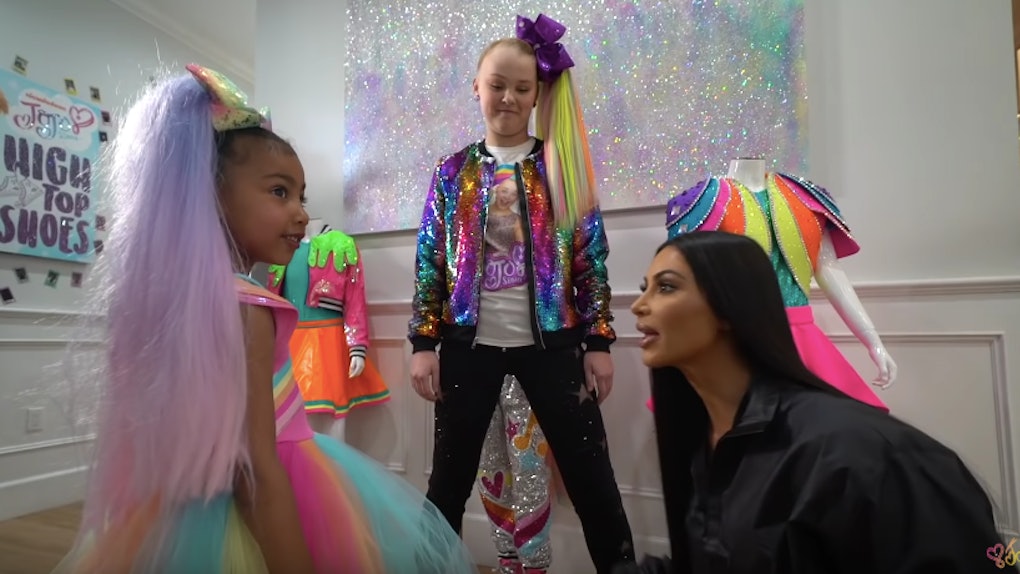 If you keep up with the Kardashians but aren't too hip to the coolest YouTube celebrities, then you might not have heard about North West and JoJo Siwa's recent announcement of a video collaboration. Well, let me catch you up. On March 23, Siwa announced at the Kids' Choice Awards that North, a huge Siwa fan, would be joining her for a video. Talk about worlds colliding. Now, you can watch this video of JoJo Siwa babysitting North West to see how the 5-year-old makes glitter slime, plays hide-and-seek, and busts a move while her super famous mom is out for the day.

The video premiered on Sunday, March 31, and let met tell you: Siwa knows what the kids like. Seriously, one look at the bright colors all over the former Dance Moms star's house lets you know that you're in for a good time. The video started out with Kim Kardashian-West dropping off North to hang out with Siwa, who assumed the role of babysitter for the day. Both North and Siwa were rocking multi-colored ponytails, so they were definitely on the same page. Kim posted about the experience on Twitter, sharing:

My baby girl North had her dream of life come true! She got to spend the day with @itsjojosiwa. #speechless#bff#Only5Once

North seemed just a bit shy to be meeting her fave YouTuber in the beginning, but when Kim assured her that she could call if she needed anything, North seemed ready to take on the day (after accidentally revealing her mom's phone password, LOL).

Before leaving Kim said, "Anything you need, you call me. OK?"

"But I don’t know your phone number. I know [bleeped]"

I guess that was the cue to say, "Bye, Mom!" Because then North and Siwa got right to the fun stuff. From checking out Siwa's room and going down the slide, to picking out a bow from Siwa's enviable collection (and then rocking a double bow), to petting Siwa's dog BowBow (who loved her, OFC), North appeared to be having a ball with the Boomerang singer.

Then it was on to a game of hide-and-seek, where North expertly hid behind an oversized pillow of Siwa. But the most fun looked like it had to be making the slime. Siwa's kitchen was stocked with vibrant paint colors and colorful glitter, and North went all in on the glitter. Mixing purple and silver sparkles in the slime, Siwa seemed to approve, calling it, "Fabulous!" And as for the more is more approach, Siwa seemed to agree, "There’s no such thing as too many."

With glitter on the floor and a quick sip of "JoJo Juice," North and Siwa were ready for their next adventure. Of course, a day with Siwa wouldn't be complete without some dance moves. "Bop!" was requested by North as her song of choice, and then the two replicated some moves from the video (but not before North impressed Siwa by expertly doing the splits).

The end of their day together had North trying out a seat in the "D.R.E.A.M." custom car and snagging a stuffed animal from Siwa's claw game machine. By the time Kim came to pick up her daughter, North was grinning from ear to ear — so the surprise D.R.E.A.M. tour tickets from Siwa right before they left were probably the cherry on top.

North said her favorite part of the day was "making a big mess," and when Kim asked, "Did you have the best day of your life?" North confirmed by jumping up with both hands in the air and excitedly agreeing, "Yeah!" All in all, the day seemed like it definitely one of the best for the eldest Kardashian-West child.

And hey, now maybe Kim has another go-to babysitter — I'm sure there's plenty of glitter to go around for a slime-making sequel.