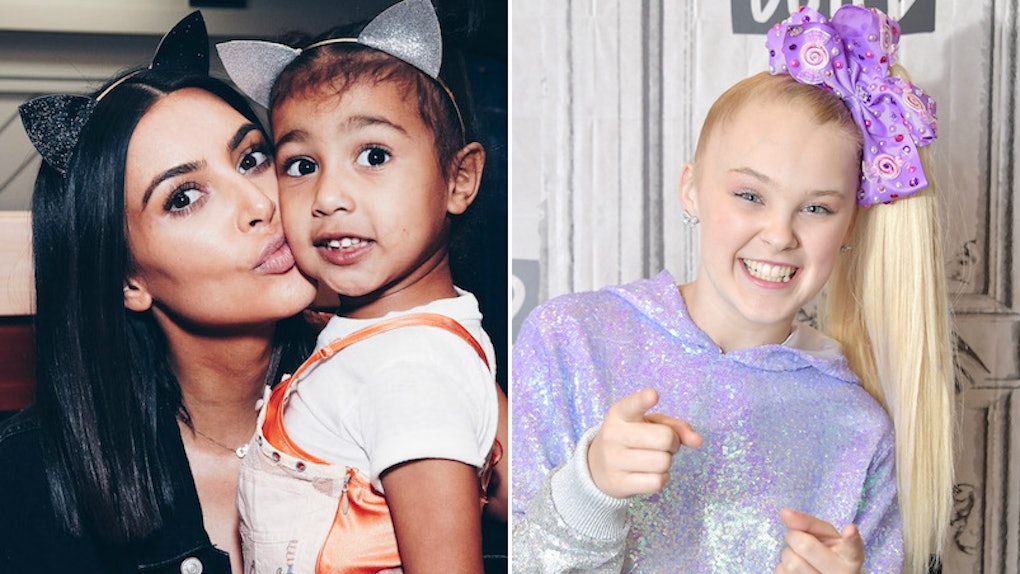 If you thought the Kardashians' social lives were intense, wait until you dive into their children's. Kim Kardashian's 5-year-old daughter North West is apparently hanging out with young YouTube and dance star JoJo Siwa, and I'm not sure if the younger generation is prepared for it. People are asking, "Are North West and JoJo Siwa friends?" ever since Siwa spoke with E! News at the 2019 Nickelodeon Kid's Choice Awards on March 23 about a collaboration video featuring herself and West. According to Siwa, West is a big fan of hers and her famous mom, Kim, is helping the two set up a video for Siwa's YouTube channel.

If you're old enough to legally drive, it's possible you have to do a little research on Siwa to figure out who she is and what her whole "thing" is. But trust me, I mean it when I say it only takes a little bit of research. With just one Google search, it's clear to me that this girl is everywhere. Siwa is a dancer, rapper, and musical YouTube icon who got her start on the famous reality TV show Dance Moms. Since then, she's grown into a childhood Star with a capital S, and is now featured across hundreds of children's products, plastered all over your favorite stores like Target and JCPenney, and is probably a hot topic of conversation between your younger siblings. Most importantly, one of her die-hard fans is North West.

According to Siwa, she and Kim Kardashian text regularly and planned the collaboration video. Siwa says, "it's gonna be incredible," partly because the public doesn't know a huge amount about North's true personality. She explained, "North West hasn't really been on the Internet before and no one has really met her personality yet, so it's going to be really, really fun. Kim says she's super excited so I'm excited."

Siwa explained that prior to communicating with the famous family, she sent West one of her signature hair bows, which West then posted. "I responded and didn't know if she would actually see it and she did," Siwa said. "I said, 'If North ever wants to be in a video or if you want me to come surprise her, I'd be down to do anything.' I gave her my number and she texted me the next day and we made it happen."

E!'s interviewer asked if Siwa and Kardashian are texting all of the time now, to which Siwa jokingly responded, "Oh yeah, we're best friends." She added, "We do text very often. We're talking about North, if she's excited, which she is. We talk about all the things we're gonna do."

Siwa also revealed that Kardashian asked if she could be featured in the video, too, which makes me feel like this whole thing is about to get out of hand in a good way.

According to Siwa's interview, she and North will be filming this Wednesday, March 27, and the video will be out by Saturday, March 30. Catch the whole interview clip here!: