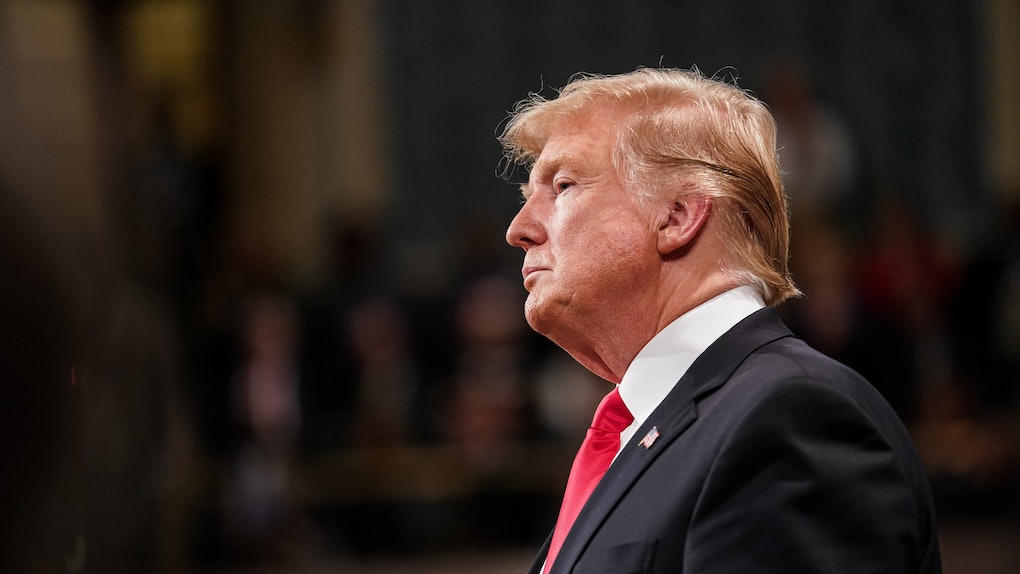 Well, that was a lot. On Friday, Feb. 15, President Donald Trump was slated to announce that he will declare a national emergency, which will allow him to secure funding for his long-promised border wall at the United States southern border — and he did. But in that same address, he also touched on a number of other random topics. What I'm saying is that you might want to take a breath before you watch this video of Donald Trump's national emergency announcement, because it's sorta, kinda all over the place.

Trump started his speech, which was supposed to be about immigration, with a series of non-immigration talking points. He addressed trade with China and his relationship with President Xi, his upcoming summit with North Korean leader Kim Jong-un, and more. Then he slowly started inching toward the topic of immigration, sharing his usual, evidence-lacking stories of abuse of women being smuggled across the border, and declaring that there is a "tremendous" amount of drugs pouring into the United States. Finally, he announced that he would be signing a national emergency to combat those problems. Elite Daily reached out to the White House for further comment on the speech, but did not hear back by the time of publication.

He didn't waste any time getting to it, either. Shortly after the president's speech, White House Press Secretary Sarah Sanders tweeted a photo of Trump signing the order in the Oval Office.

The move, which will almost certainly face some legal challenges by Democrats, has already been criticized. On Friday, House Speaker Nancy Pelosi (D-California) and Senate Minority Leader Chuck Schumer (D-New York) called the declaration "unlawful" and pointless in a joint statement. It read in part,

The President’s unlawful declaration over a crisis that does not exist does great violence to our Constitution and makes America less safe, stealing from urgently needed defense funds for the security of our military and our nation. This is plainly a power grab by a disappointed President, who has gone outside the bounds of the law to try to get what he failed to achieve in the constitutional legislative process.

“The President is not above the law. The Congress cannot let the President shred the Constitution," they added.

President Trump's announcement comes after he and lawmakers reached a deal to avert another government shutdown from going to effect on Feb. 15. The agreement provides $1.375 billion for 55 miles of new fencing along the border, which is far short of the $5.7 billion the president had asked for for 234 miles of concrete or steel barriers. Because of that, Trump apparently decided to declare a national emergency to get the remaining funds from the Department of Defense and other sources. Per CNN, he is reportedly trying to redirect more than $6 billion for the wall, for a total of about $8 billion.

And some people believe there's a chance he could get it. On Feb. 14, Joseph DiGenova, former U.S. Attorney for the District of Columbia, wrote in The New York Daily News that "President Trump will have the law on his side when he uses the power of his office to secure the U.S. border with Mexico."

“The current political reality in Washington ensures that the crisis on our southern border will continue to go unresolved unless the executive branch steps in," he continued." Fortunately, both the Constitution and the Congress have placed the authority to do so firmly with the President of the United States.”

Well, here we go. Buckle up, friends — it sounds like there's a lot more drama on the way.