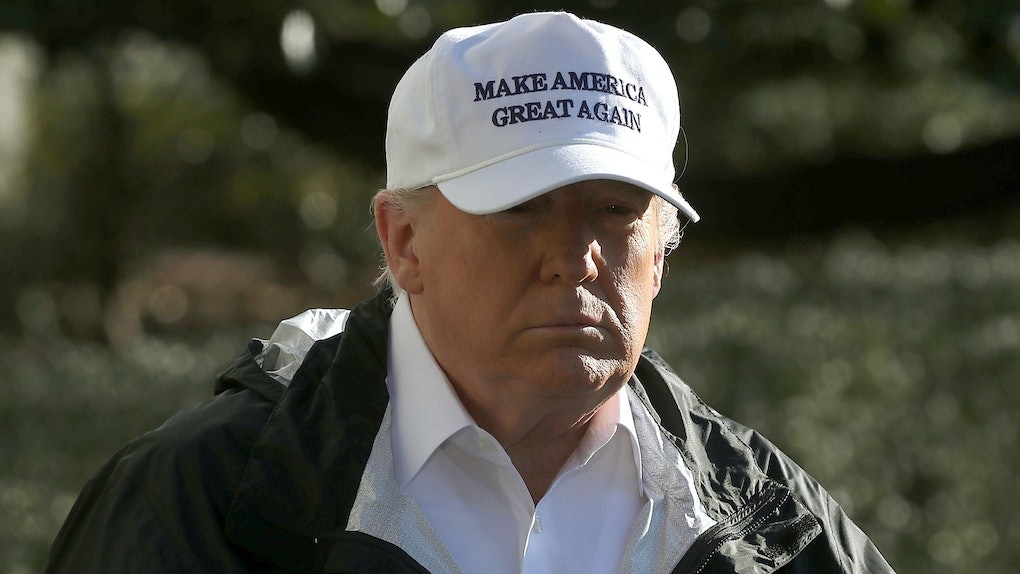 In television years, this government shutdown show is about due for a midseason break. As of Jan. 10, it's been nearly three weeks since the government put up the "out of office" sign on Dec. 22 and President Donald Trump still hasn't received $5.7 billion in funding for his border security proposal that includes a wall between the U.S. and Mexico. With Trump and Democrats at a standstill, the president flew to Texas on Thursday, Jan. 10, in an effort to drum up support for his border wall. But this video of Donald Trump's trip to the border is really uncomfortable watching, thanks to his... detailed... idea of what he claims happens at the border.

The president went down to the U.S.-Mexico border in McAllen, Texas, on Thursday, where he was scheduled to have a roundtable discussion with local lawmakers and law enforcement about immigration and the border, as well as get a briefing about border security efforts. However, it quickly went off the rails. During the roundtable, the president went off on a tangent about illegal immigration, which included an... unsettlingly detailed speculation of how human traffickers allegedly bring people across the border. "They drive," he began. "They just go where there’s no security, where you don’t even know the difference between Mexico and the United States." He went on,

They just make a left into the United States and they come in and they have women tied up. They have tape over their mouths, electrical tape, usually blue tape, as they call it. It’s powerful stuff. Not good. And they have three, four, five of them in vans, or three of them in back seats of cars. And they just drive right in. ... And if we had a barrier of any kind — a powerful barrier, whether it’s steel or concrete — if we had a barrier, they wouldn’t be able to make that turn. They wouldn’t even bother trying.

It's unclear if the president was referring to any specific instance or instances, or where he got the information he relayed. The White House did not immediately respond to Elite Daily's questions on the matter.

It's a talking point that Trump has brought up before. In an address to the public on Tuesday, Jan. 8, the president suggested that women and children were in danger from undocumented migrants. "One in three women are sexually assaulted on the dangerous trek up through Mexico. Women and children are the biggest victims, by far, of our broken system," he said at the time. Research has indicated that some 60 to 80 percent of female migrants attempting to pass through Mexico are subjected to sexual assault.

Trump has tended to use the specter of violence at the hands of undocumented immigrants as justification for his border wall, but the overall facts don't necessarily support it. Immigrants, those here legally or otherwise, are in fact less likely to commit crime, including violent crime, than native-born Americans, research shows.

The president was in Texas to make the push for his border wall, the sticking point in the nearly three-week-long partial government shutdown that's left some 800,000 workers without pay. Despite its portrayal as a photo op, there was speculation that it might actually turn out to be an effective trip for him — if he used the trip to declare a state of emergency. In the Oval Office on Jan. 9, Trump told reporters that if a deal cannot be reached, then he would consider declaring a state of emergency, allowing him to source funds from the military, according to NPR. "I think we might work a deal and if we don't, I may go that route," Trump said. "I have the absolute right to do a national emergency if I want." Elite Daily reached out to the White House for further comment on the matter, but did not immediately hear back.

Speculation over Trump possibly using his trip to McAllen to declare a state of emergency sprouted over the president's choice of travel companion. White House counsel Pat Cipollone flew with Trump to Texas, and he could have the power to back Trump up should he decide to make the declaration during his trip, according to The New York Times. And it could be done. Elizabeth Goitein, co-director of the Brennan Center for Justice's Liberty and National Security Program, told NPR that Congress didn't put any "substantial — or really any — barriers on the president's ability to declare a national emergency."

On Wednesday, Trump held a meeting in the situation room with Speaker of the House Nancy Pelosi and Senate Minority Leader Chuck Schumer to try and make that deal. The meeting ended in Trump storming out of the room, according to the Times. During the meeting, Pelosi said she would not fund a border wall even if Trump ends the shutdown, which resulted in Trump not only storming out but allegedly, according to Schumer, "[slamming] the table" and throwing a "temper tantrum," according to The Hill. Schumer told reporters outside the West Wing following the meeting, "Again, we saw a temper tantrum because he couldn't get his way and he just walked out of the meeting." Elite Daily reached out to the White House for comment on Schumer's claim, but did not immediately hear back.

The next day, in a Jan. 10 tweet, Trump denied throwing a tantrum and said "Cryin Chuck" was telling his "favorite lie." Trump wrote,

Cryin Chuck told his favorite lie when he used his standard sound bite that I "slammed the table & walked out of the room. He had a temper tantrum." Because I knew he would say that, and after Nancy said no to proper Border Security, I politely said bye-bye and left, no slamming!

Between that weird tangent caught on video and his supposed temper tantrum, 2019 is already way weirder than I gambled on. Hold on for the ride, I guess.