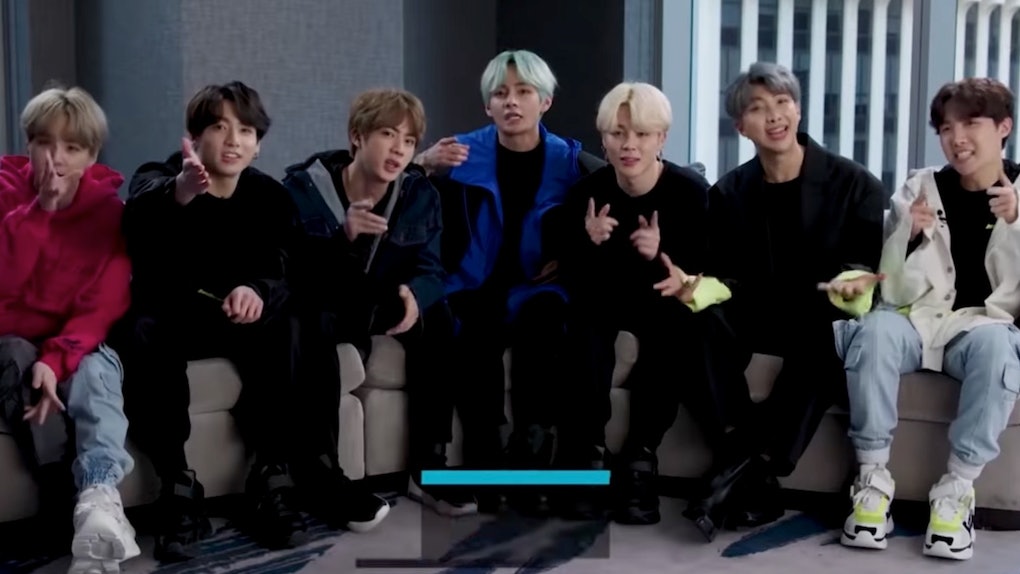 Stop whatever you're doing, ARMY, because BTS is here to give us all a lesson in Korean slang with a quick video that covers everything from underwear colors to birth signs. Suga, Jungkook, Jin, V, Jimin, RM, and J-Hope are the seven wise but adorable tutors I need in my life as they attempt to school ARMYs in three cool Korean terms. Of course, one of them turns out to mean the same thing in English (more on that in a sec). But it doesn't really matter because this video of BTS teaching Korean slang is everything, and you will totally be hot for teacher.

OK, so in case you somehow missed the big news, the septet is currently covering a special double issue of Entertainment Weekly dated April 5 and April 12. And yes, they are the first K-pop group to earn this prestigious honor, so well done, boys!

Anyhoo, inside the issue — which dropped just a few weeks before the April 12 release of BTS' upcoming sixth EP, Map of the Soul: Persona — the boys give us a behind-the-scenes look at their career and chat about how much they have grown as a septet since first landing on the K-pop scene.

Check 'em out on the cover:

Meanwhile, the very same day that EW posted the in-depth article featuring BTS on its website, the publication also shared the video of the boys teaching Korean slang on YouTube. And I don't know about you guys, but I've never been more hype to get my study group on.

"We're about to teach you Korean slang," RM announces as the video kicks off. Then he goes on to tell us that the first word we're learning is "inssa," and it means you're an "insider" — but, like, maybe not in the way you're thinking.

"It's not technically the meaning of an insider," he explains. "It means, like, a popular one who has a lot of friends."

Totally using that from now on.

"You're inssa," Jimin then tells V.

"I'm assa," Jin then jokes, as Jimin doubles over in laughter.

Assa, of course, is the opposite of inssa.

"So there's inssa," RM clarifies. "And there's assa. So it's insider and outsider."

And just like that, we've somehow already arrived at the final word of the lesson. Time flies and all that, I guess. Weirdly, the last phrase the boys are here to school us on is... TMI, which is English slang, as well. Because, as we all know, BTS invented English and I'm not here to debate.

"It's like an abbreviation for too much information," RM explains. Then he inexplicably adds: "My star sign is Virgin. Wow. See, that's a TMI. If somebody tells me, like, some news or some stuff that I never wanted to know, that's a TMI."

"My underwear color is blue," J-Hope then announces.

"TMI!" the group collectively responds. "Too much information!"

"No. I don't want that information," RM adds.

More like this
This Video of Addison Rae Teaching Kim Kardashian The "WAP" Dance Is Everything
By Michele Mendez
BTS' "Butter": Release Date, Music Video, Performances, & More Details
By Michele Mendez
Lil Huddy & Charli D'Amelio Made Everyone Cry On The Set Of His "America's Sweetheart" Video
By Michele Mendez
Stay up to date