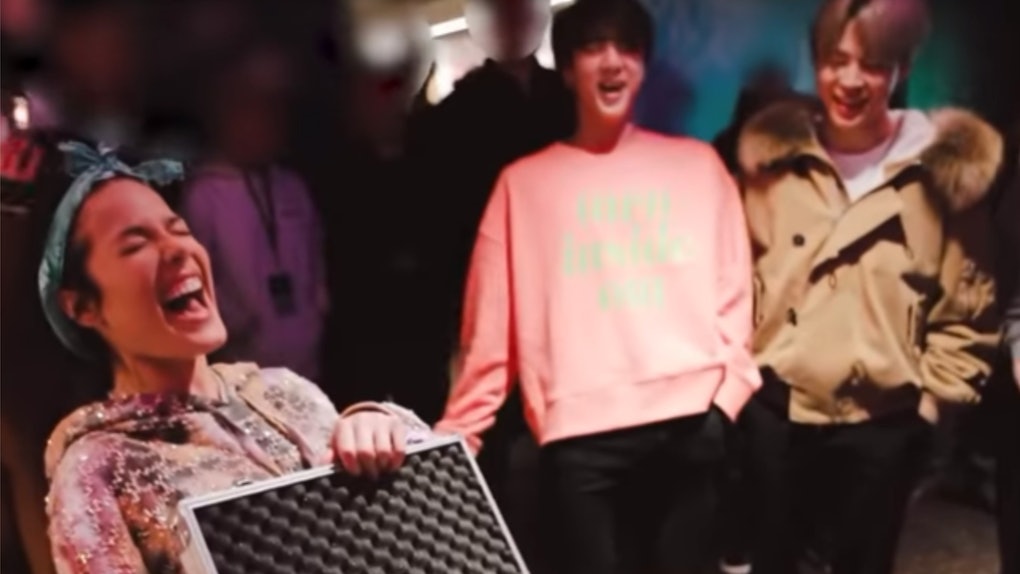 Every member of the BTS ARMY has probably imagined what it would be like to be BFFs with BTS. RM, Jin, Suga, J-Hope, Jimin, V, and Jungkook are just the seven sweetest guys on the planet, and judging from all their hilarious YouTube videos, they seem like they're super fun to hang out with. Well, Halsey is actually best friends with BTS, and this year, they even gave each other Christmas gifts. BTS' 2019 Christmas gift for Halsey will make you so jealous.

When the BTS ARMY discovered both BTS and Halsey were going to be at the Dec. 6 Jingle Ball concert, they immediately predicted the artists would not only get a chance to catch up, but also perform their hit collab "Boy With Luv" together. The concert has now come and gone, and, luckily, fans got both. BTS opened the show, and, for their final song, they brought out Halsey to perform with them. Fans noticed BTS and Halsey coordinated their black-and-white outfits together, and they also showed off matching glittery microphones.

The BTS ARMY already knows each of the guys has their own designated sparkly microphone, but how Halsey came into one, too, was a mystery. She never had one before the Jingle Ball concert, after all.

Now, Halsey released a behind-the-scenes clip from Jingle Ball in which she confirmed BTS surprised her with a sparkly microphone for Christmas.

"The first time we ever performed 'Boy With Luv' together, I was making a joke that they all had sparkly microphones and I felt left out," Halsey said. "They gifted me my own sparkly mic. It was really thoughtful and really amazing and I got to use it."

The BTS content starts around the 3:00 mark in the clip below.

Little did BTS know, Halsey got them Christmas gifts, too. "Every year, for my two little brothers, I make them a Christmas stocking," Halsey explained, before surprising BTS with "the biggest socks" they've ever seen, which included a bunch of cool goodies inside, like candles and Super Mario merch.

V even said Halsey got him his favorite candle.

After the adorable gift exchange, Halsey and Suga talked about their collaboration for "Suga's Interlude," which dropped on Dec. 6. Halsey asked Suga how he was feeling about the release. "So happy!" Suga told her.

BTS and Halsey's friendship is the real deal and the BTS ARMY loves seeing it grow each time they get together.

More like this
BTS' "Butter": Release Date, Music Video, Performances, & More Details
By Michele Mendez
A Video Of Sydney Sweeney Crying On Instagram Live Has Fans Feeling For Her
By Abby Monteil
Lil Huddy & Charli D'Amelio Made Everyone Cry On The Set Of His "America's Sweetheart" Video
By Michele Mendez
Stay up to date