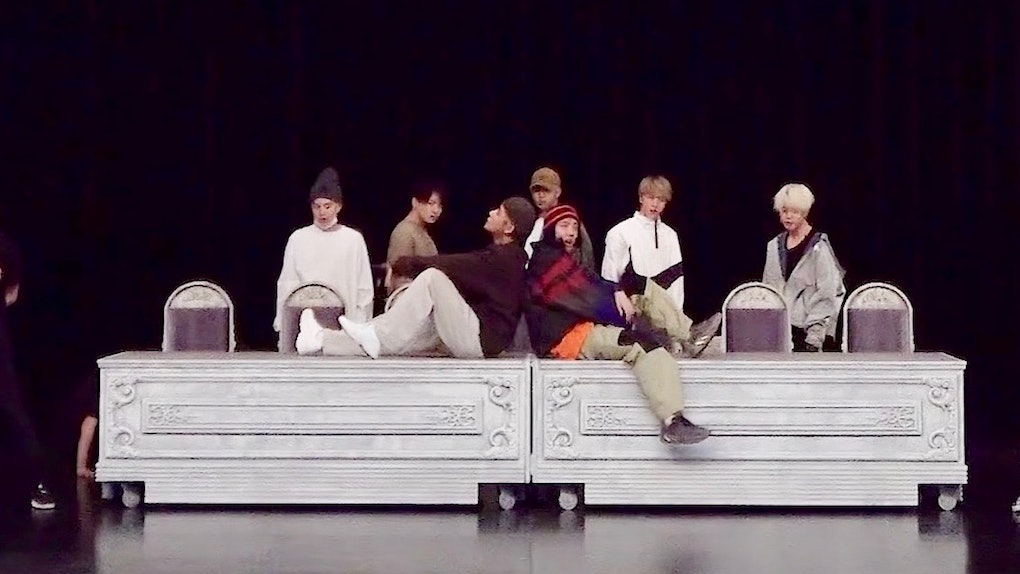 This Video Of BTS' "Dionysus" Dance Practice Is So Powerful, It'll Make You Feel Invincible

Practice makes perfect, and when BTS is involved, practice makes really perfect. When it comes to performing hits off their latest album, BTS has absolutely been killing the game. The boys have already taken to various stages and TV shows to perform new music off Map of the Soul: Persona, and they officially started their Love Yourself: Speak Yourself world tour in Los Angeles, California on May 4, giving fans never before seen performances of new and old songs alike. The show opened with MOTS: Persona's "Dionysus," and this video of BTS' "Dionysus" dance practice shows the boys hard at work perfecting some intense choreography.

While ARMYs at the Rose Bowl in Pasadena, California got a look at the final performance of the song in person, BTS shared a little behind-the-scenes clip that gives insight as to how they perfected all their moves. The video of RM, Jin, Suga, J-Hope, Jimin, V, and Jungkook practicing "Dionysus" was posted on BTS' official YouTube page on Sunday, May 5, and it clocks in just over four minutes. In the video, the boys are practicing on a mostly black stage with a few props that get moved around during the dance. There's also an entire team of backup dancers who are wearing all back and are clearly pretty talented in their own right. The choreography in the video is pretty intense, and it showcases BTS at their most powerful, IMO. But don't take my word for it, check out the video for yourself.

If you've been keeping up with BTS' performances of their new songs since Map of the Soul: Persona dropped on April 12, you might already be familiar with the "Dionysus" choreography. On April 20, 2019, BTS appeared on Korean music show Music Core, where they performed both "Boy With Luv" and "Dionysus," and the dance moves for "Dionysus" at Music Core looked very similar, if not identical, to the ones in the practice video.

On April 21, BTS performed "Boy With Luv" and "Dionysus" again at Inkigayo, another Korean music show that features the latest and greatest in Korean music. Both the performances of "Dionysus" at Music Core and Inkigayo took on the same, dark tone of the practice video, whereas both the "Boy With Luv" performances and practice video take on a much lighter and much more colorful tone. That kind of tone swapping takes a lot of work and practice, so who better to do it than one of the most talented boy bands in the world?

In case you don't speak Korean and are wondering what the lyrics to "Dionysus" actually mean, I've got you covered. The song, which is a total bop, is all about partying, hanging out until the sun comes up, and being with your friends. It's a total summer anthem that has already encouraged me to push stress to side and go enjoy the day.

BRB, gonna go try to learn this "Dionysus" choreography myself so I can feel like my own K-Pop queen.