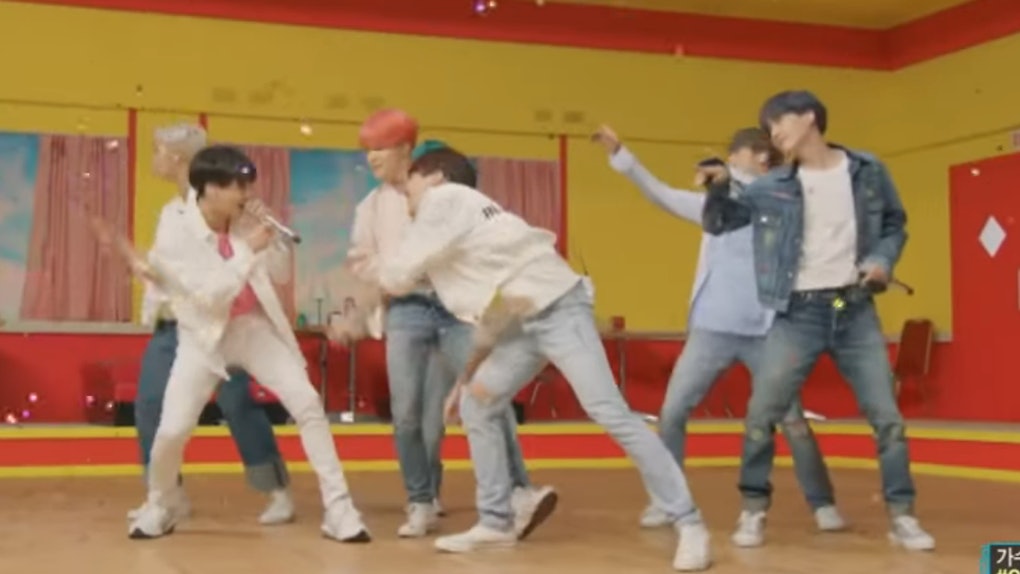 Over the past couple of days, ARMYs have seen BTS perform some of their new Map of the Soul: Persona songs for the first time ever. So far, the boys have performed “Boy With Luv” “Dionysus” and it looks like they'll have those songs on rotation through comeback season, and ARMYs have no complaints! The videos of BTS’ Music Core performances of "Boy With Luv" and "Dionysus" “Home” will blow you away, for sure, and show exactly why Jungkook, Jimin, V, RM, Suga, J-Hope, and Jin continue to blow away the competition with their unique sound and stage presence.

BTS appeared on Music Core on April 20 and put on another mind-blowing performance of "Boy With Luv" and "Dionysus" for their ARMYs in the audience (and the millions watching all around the world) For their lead single performance of "Boy With Luv," they recreated the old-school diner look and feel from their music video with Halsey. The whole thing started out with six of the boys paired off at each table (RM and V were in the middle of an arm wrestle at their booth, for example) before Jimin walked through the front door of the restaurant and kicked off the performance. So good!

After that, the boys performed "Dionysus" and they rocked their black togas and suits this time around. It goes without saying that the performance was fire.

When they weren’t performing and just chatting on stage, the BTS boys apparently enjoyed joking around a lot. According to one fan who was at the recording, they all seemed to have a lot of inside jokes.

“Music core pre-recording: It seems like the guys have a lot of popular inside jokes. OP said they kept saying ‘i love jimin... i love namjoon....’ in a specific tone and the way they say it is VERY formal. Almost like how someone would put in ‘i 💕 JM,’” one fan explained on Twitter.

And on top of putting on a great performance and joking around, the fan also explained that the boys, especially J-Hope, looked great!

“This isn’t an interaction but op said jhope is soooo pretty. She said his beauty can’t be contained within the camera and he looks like a well dressed pure, fluffy, round, and cute squirrel😩🐿 @BTS_twt,” they said.

All in all, it seems like BTS had a great time on Music Core. And that all comes across in their performances, which is why they ended up getting first place at the end of the performance (the winner is determined through a scoring system based on a combination of physical album and digital sales, music video views, a viewers committee of 2,000 people who pre-voted, MBC radio broadcast numbers, and audience live voting). BTS walked away with first place easily, which means we got a super adorable encore performance of "Boy With Luv" from the boys.

One has to wonder when we'll get to see performances of the boys' other Map of the Soul: Persona tracks, like "HOME" and "Mikrokosmos." Who knows, maybe the boys will even share a bit of their other new music at the Billboard Music Awards next month. Or maybe the Grammys next year? They recently told Entertainment Tonight that they have huge plans for the Grammys, especially since they were the first ever K-Pop group to appear at the show in 2019.

"They brought a boy band from Korea to the GRAMMYs," RM explained to ET while also giving lots of credit to BTS fans around the world for helping make that happen. "It's not just a big deal, it's a huge deal. We'll be back."

It sounds like BTS is really looking ahead to the future and hoping for bigger and better things to come their way. And having that mindset is admirable, especially when you consider all the success the boys have achieved the past few years. It means that they still have goals and dreams even in spite of reaching such a huge world stage. They’re hungry for more and I’m sure BTS fans are excited about that!