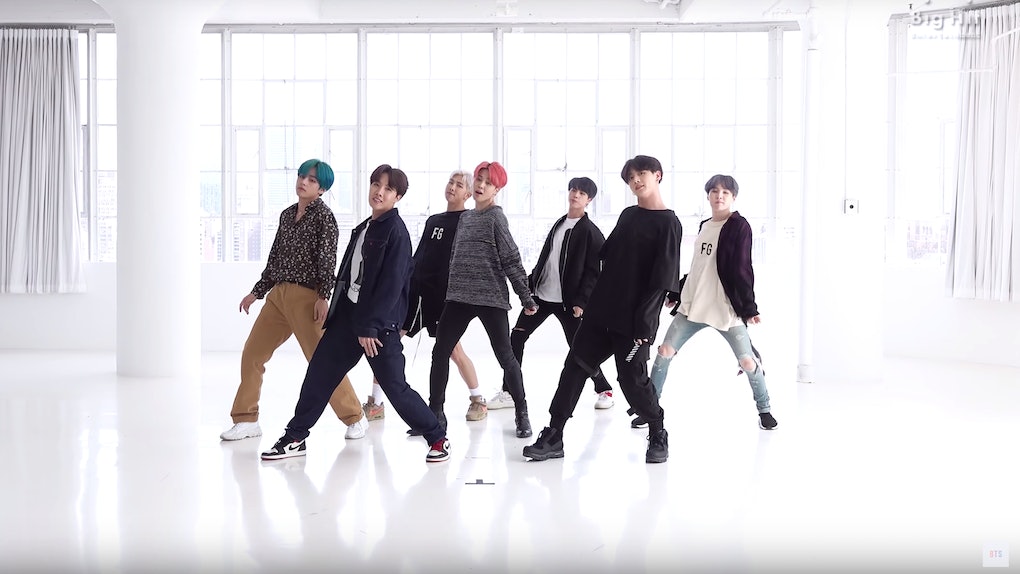 It's no secret that K-pop group BTS absolutely slays when it comes to choreography. Their performances are flawlessly coordinated, their moves are ever-so-graceful and sensual, and every time they get up on stage the energy in the room is undeniable. But whipping out such flawless dance moves doesn't happen overnight, and this video of BTS' "Boy With Luv" dance practice reveals they work hard to make it look so, so easy.

In a video posted to the official BTS YouTube channel BANGTANTV called "[Choreography] BTS (Boy With Luv) Dance Practice," Jin, Suga, RM, J-Hope, Jimin, V, and Jungkook can be seen practicing the choreography for "Boy With Luv," which they've already performed on a variety of stages, including Saturday Night Live and Korean music shows Inkigayo, Music Core, and Music Bank. In the April 21 behind-the-scenes video, the boys are in an all-white room dressed in casual outfits, and they're hard at work practicing choreography for their popular song off the latest BTS album, Map of the Soul: Persona.

TBH, they seem so flawless during practice that it just looks like a regular performance. Not once during the 3 minute and 50 second rehearsal did it appear like the boys slipped up or even made a mistake — and that's really impressive.

Check out the BTS dance practice for "Boy With Luv" to get a glimpse of what goes on when an internationally acclaimed boy band rehearses without thousands of eyes watching. Hint: it's so much more flawless than you'd expect.

A recent fan theory suggests that BTS has been practicing choreography to "Boy With Luv" for a year now, even though the album and music videos dropped in April 2019. ARMYs found a video of Jimin in "G.C.F in Osaka" doing a few moves that look very similar to moves from the "Boy With Luv" music video. Twitter user @Mochi_Jimin02 wrote, "BTS have been planning the choreo since last yr..... Jimin did it in the GCF Osaka." If the boys really have been rehearsing and practicing for so long, it makes sense that their delivery is absolutely flawless by now.

Their "Boy With Luv" performance not only features absolutely phenomenal choreography and a fun, danceable beat, but it's breaking records and topping charts left and right. Within 24 hours of its release, "Boy With Luv" broke YouTube's 24-hour viewing record set by BLACKPINK for "Kill This Love" that was previously held by Ariana Grande for "thank u, next." In just one day, ARMYs helped the group rack up over 78 million views on the K-pop group's music video. As of Sunday, April 21, the views on the music video are at 121 million. Totally casual.

The video broke another YouTube record in the first 24 hours — it racked up 2 million YouTube comments, mostly positive, of fans celebrating the song, the video, and of course, the boys' dance moves.

The BTS YouTube channel regularly posts choreography and rehearsal footage of the boys, showing that pulling off the on-stage stunts requires practice, patience, and skills. Here's to more performances of "Boy With Luv" where they can show off all that hard work!

More like this
Rosé From BLACKPINK's "Gone" Music Video Is The Ultimate Sad-Girl Aesthetic
By Abby Monteil
What Does Taylor Swift's Vault Door Video Mean? Fans Are Decoding It
By Cianna Garrison
I Tried Singing While Running Like Miley Cyrus & OMG, My Lungs
By Rachel Varina
Stay up to date