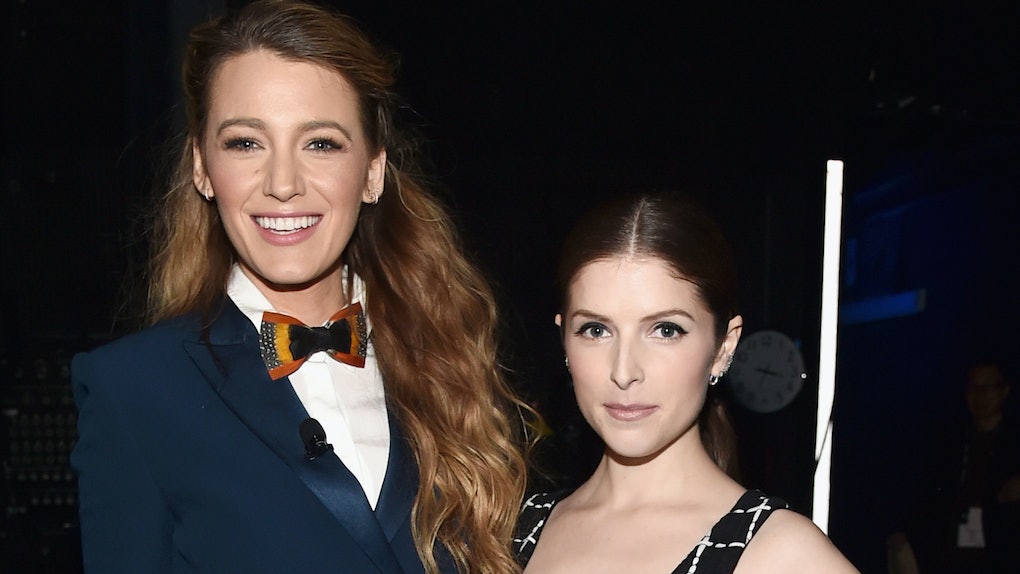 Turns out, the woman who once played It Girl Serena van der Woodsen on Gossip Girl was named after her grandmother's brother. Who was murdered. As in MURDERED. But I'm jumping way ahead here because — spoiler alert! — that big reveal doesn't come until near the end of the video. So let's rewind for a sec here and start way back at the almost-beginning, right after Anna Kendrick cops to being scrappy AF.

"I'll tear your face off," she warns.

I don't doubt it. Here's how the Pitch Perfect star answers seven other questions the internet was dying to ask:

One person asked me if I would ever be a superhero. And my brother had sent me the Squirrel Girl comics and I said, 'Oh yeah, I'd like to be Squirrel Girl,' because I assumed it would be one of those answers that just like, goes away, instead of being something that becomes click bait. Boy, was I wrong."

OMG, that's so nice. I tricked people into thinking I have a good personality! No, I'm not Canadian. I'm from Maine.

Is Anna Kendrick in the band Echosmith?

So now that you're all curious, here is a picture of Echosmith:

There's no way that anybody thinks that. There's no way! No, we are not related. But also: WHAT?! It's his FIRST name.

Does she use autotune?

How dare you. How very dare you. That is rude. No, I don't! Have I had to do more than one take? Yes. Have I used autotune? Get f*cked!

What Anna Kendrick character are you?

Oh, is that from a quiz? I'm Stephanie from A Simple Favor, in theaters September 14th.

And now it's Miss Lively's turn...

How does Blake Lively work out?

I'm so glad people are interested in my career. I workout with Don Saladino, trainer to the stars.

How Does Blake Lively dance?

Super well. How does she dance? That's a very specific question. Maybe it's because I said, or my husband said, that I use a lot of elbows in life? So maybe they think it's just a very elbow-y dance. And if they thought that, they would be correct.

It's not really deleting your Instagram. You just hide your posts, and then you can get them back if you want. But only pop stars do it, and you know I'm campaigning to become a pop star, so I thought it would bring me one step closer.

How did Blake Lively get her name?

Here's where things got kind of dark.

My grandmother's brother was named Blake. But he was murdered. So thanks for asking.

Is Blake Lively on LinkedIn?

Not for lack of trying. It's offensive how many LinkedIn invites I get. And an invite makes it seem lovely. It's not an invite. It's a parasite.

What is a Blake Lively ring?

Clearly not a Nuvaring.

More like this
These Tweets About BTS' "Film Out" Video Are Filled With So Many Questions & Theories
By Michele Mendez
Are Olivia Lux & Utica Dating After 'Drag Race'? Olivia Gave An Update
By Dylan Kickham
Dylan Meyer's Instagram For Kristen Stewart's 31st Birthday Is Just Too Sweet
By Daffany Chan
Stay up to date