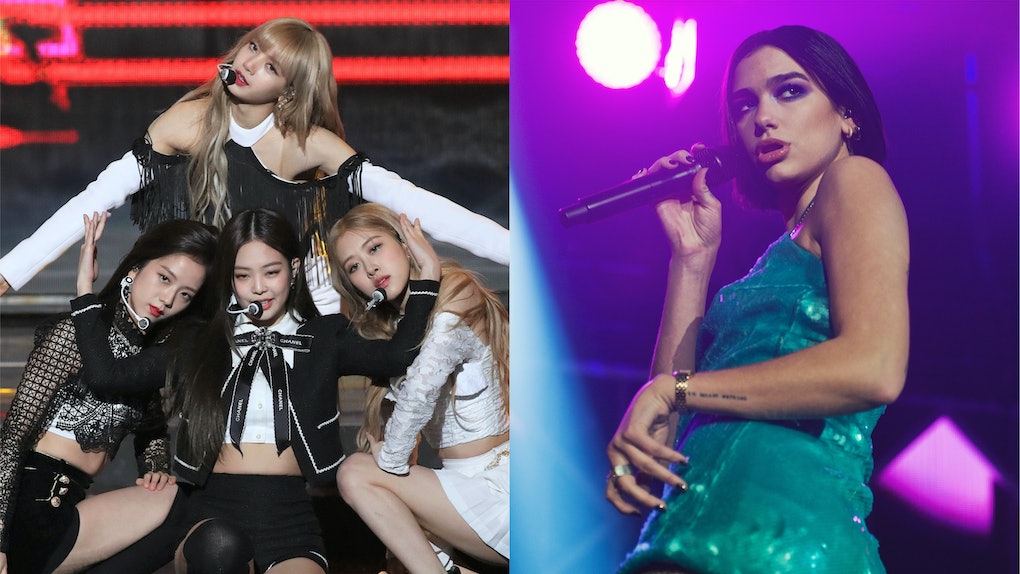 Ever since BLACKPINK and Dua Lipa dropped their track "Kiss and Make Up" back in October 2018, fans have been dying to see the girls perform the single together on stage. I mean, who wouldn't? The amount of girl power on stage would be almost too much to handle (keyword: almost). Fans have seen the K-Pop group perform the song as part of their IN YOUR AREA world tour, but never with the "IDGAF" singer herself. That is, until now. During BLACKPINK's concert on May 1 in New Jersey, Dua Lipa made a surprise appearance and joined Jennie, Lisa, Rosé, and Jisoo on stage for a performance of "Kiss and Make Up." The video of BLACKPINK and Dua Lipa performing "Kiss and Make Up" will have fans wishing the two acts could perform together every night.

So, here's what happened: the K-Pop group was performing at the Prudential Center in Newark, New Jersey, their first-ever show at the venue as part of their IN YOUR AREA world tour. After the girls performed their new song "Don't Know What to Do" off their EP Kill This Love, fans were eagerly waiting for Rosé to start "Kiss and Makeup." She and Jisoo have been singing Dua Lipa's part in the single for the past few months ever since BLACKPINK began their tour in November 2018. Instead of having the members on stage to introduce the song, though, the stage was left empty — which should have been the first clue that something big was coming.

Then, out of nowhere, Dua Lipa ascended from underneath the stage and surprised the crowd by singing her "Kiss and Make Up" verse herself.

Watch the moment below:

Fans were definitely not expecting that. The best part was when BLACKPINK joined Dua Lipa and the girls jammed out together on stage. There were lots of cute interactions between them, including the BLACKPINK members helping Dua Lipa with the song's choreography, and ending the performance with a big group hug.

Just look at how happy they looked!

It was a moment to remember, for sure. The BLACKPINK members then thanked Dua Lipa for performing with them before the singer walked off to let the girls continue with their concert. Even after Dua left, Jennie, Lisa, Rosé, and Jisoo couldn't stop gushing over her — probably because they've been a fan of the singer for a while. Jennie and Lisa even went to go see Dua Lipa in concert when she performed in Seoul, South Korea in May 2018.

Their initial meetup made fans want a collaboration between them. That feels like forever ago, because look at where they all are now! The girls have one collaboration under their belt and now a live performance together.

With the BLACKPINK girls performing all over the world for their IN YOUR AREA tour — including stops all over Europe, Asia, Australia, and North America — New Jersey fans must be feeling pretty good about seeing the girls perform "Kiss and Makeup" together for the first time.

More like this
These Tweets Comparing SuperM's "We Do" To BTS' "Dynamite" Video Are So Split
By Michele Mendez
Demi Lovato Said She Won't Share Details About Her Recovery Again After Being Criticized
By Brandy Robidoux
When Will BLACKPINK's Lisa Make Her Solo Debut? It May Be Right Around The Corner
By Michele Mendez
Stay up to date