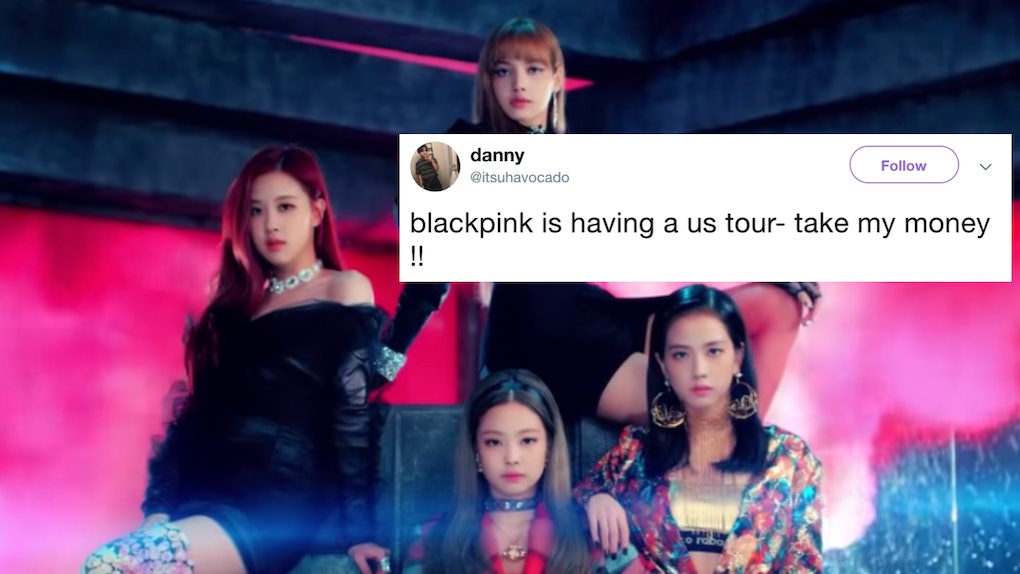 Step aside, BTS, to make some room for another K-pop sensation who has my attention as of late. Female group BLACKPINK has been slowly creeping onto my radar ever since I became invested in member Jennie and her relationship with EXO's Kai, and now I'm all in. It's pretty good timing on my part, too, considering their tour is underway! BLACKPINK's In Your Area world tour dates are still rolling out and their fans are celebrating all around the globe. Get ready, Blinks. It's all happening.

The girls have hit the road, and by road, I mean are busy taking international flights all over the freaking place. BLACKPINK's label, YG Entertainment, announced on Jan. 9 that Jennie, Lisa, Rosé, and Jisoo will be traveling to North America, Europe, and Australia throughout 2019 to bring their epic music to a stage that is most certainly near you. This is also the first time the girls will be performing in these regions.

Most notably, BLACKPINK is going down in history as the first girl K-pop group to perform at Coachella. Fans who follow the group know that a few things set them apart in the K-pop industry, and just one example is the meaning behind their name. A representative from YG Entertainment once said the colors represented in their name are actually meant to be commentary on the importance of beauty. The rep explained,

The meaning of Black Pink aims to contradict the common perception of the color pink. Pink is commonly used to portray prettiness, but Black Pink actually means to say that 'Pretty isn't everything. It also symbolizes that they are a team that encompasses not only beauty, but also great talent.

If you know you're in for the tour but still playing catch up on exactly who the girls are, fear not. They actually once had a whole short series called BLACKPINK House which acts as a great introduction to each member. The series itself contains 12 episodes that basically feature the girls hanging out in their shared home and being charming AF.

Is it suspenseful and intense? No. Is it a joy anyway? Sure is.

However, BLACKPINK's tour is sure to surpass their series' drama by a billion percent. Fans on Twitter are freaking out over the new dates.

I did my own research to get a taste of their "vibe" and decided this is my favorite music video of theirs right now:

Do you, by chance, know where one can purchase a disco ball tank engine?

Doesn't matter. Check out the dates and locations BLACKPINK will be in the United States plus their upcoming European gigs!

May 8 — Forth Worth Convention Center, Fort Worth, Texas

Keep your eye on tickets over at YG's website where prices and sale dates will be listed.

Godspeed, out there, Blinks!