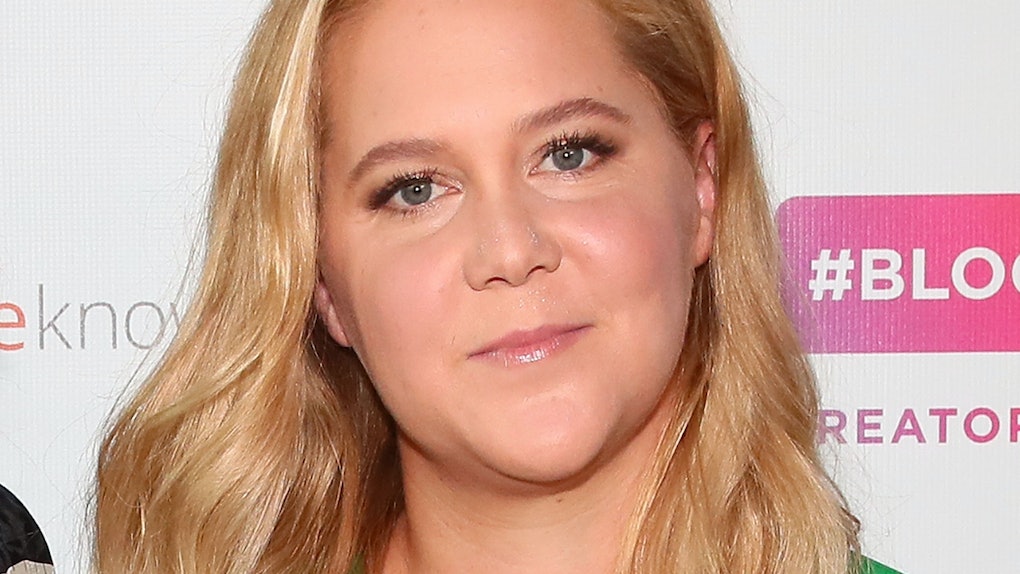 Amy Schumer's pregnancy is the longest one I've ever experienced in my life by far. I feel like she's been super pregnant for, like, a year. Schumer is famous for "keeping it real" with her fans, which has meant a whole slew of things throughout her first pregnancy. Her followers have seen her puke in a cab, on the street, in an actual toilet, and probably a few other places I'm missing. She also posted nude photos of herself running through a field. (Because, why not?) A new video of Amy Schumer showing how she puts on socks while pregnant is one of her objectively more subtle pregnancy posts, but just as relatable and hilarious.

According to various reports, Schumer's due date is rapidly approaching. Based on when she announced her pregnancy, fans know her baby is due around the same time that the Duchess of Sussex, Meghan Markle's, baby is due, which is in April. As part of Schumer's latest Netflix special Growing, she stated, "I'll tell you who it's not fun to be pregnant at the exact same time as... Meghan Markle. I think we're, like, to the day the same amount pregnant." Schumer has also endured the extremely uncomfortable pregnancy curse of hyperemesis gravidarum, which causes extreme nausea and vomiting. Weirdly enough, she has this in common with Markle's sister-in-law, Kate Middleton, who dealt with the same thing.

OK. So this baby is coming and has a lot of similarities to the royal family. EN-EE-WAY.

Schumer is just trying to continue on with her day-to-day life doing normal day-to-day things while an entire human thrives inside of her belly. This means doing everyday tasks like putting her socks on. In keeping with her playful spirit (despite her truly agonizing pregnancy) Schumer made a "how to" video showing people how to put your socks on while super-duper preggers.

In the video, she sits on the side of her bed and walks viewers through what ultimately becomes a pretty complicated process. Schumer has no issues getting her left sock on (albeit you can tell there's a great deal of effort going into reaching that foot) but it's her right sock that really gives her trouble. She can't quite get the whole thing on by bending forwards and ends up having to do a weird side straddle thing to make it happen.

"Now you try it from behind," she explains, "You hook your toe, and then you slowly just sort of will the sock up your foot." Once the sock is on, she proudly announces, "And that's pregnant!"

Unfortunately, Schumer had to cancel the remaining dates on her comedy tour due to her hyperemesis gravidarum, but fans are relieved by videos like this that prove she still has a sense of humor about everything.

Best of luck, Amy! Growing was awesome, but something tells me there is a whole world of comedy content coming for you once this baby arrives. Hang in there.

More like this
BTS' "Butter": Release Date, Music Video, Performances, & More Details
By Michele Mendez
This Video of Addison Rae Teaching Kim Kardashian The "WAP" Dance Is Everything
By Michele Mendez
Lil Huddy & Charli D'Amelio Made Everyone Cry On The Set Of His "America's Sweetheart" Video
By Michele Mendez
Stay up to date