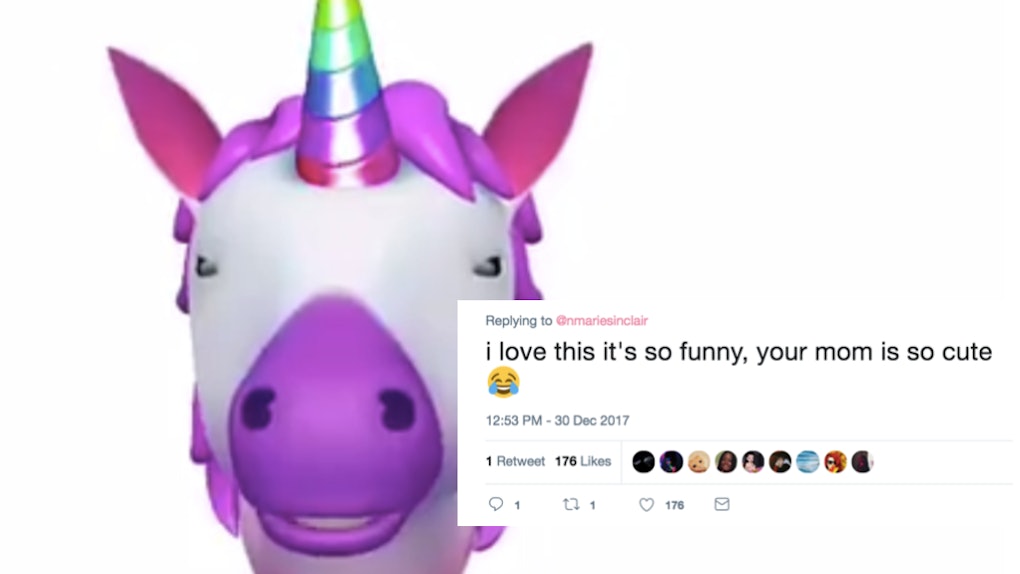 Technology is certainly a blessing, but one woman just proved it can also be a curse — especially if you're not feeling up to snuff. This video of a mom's coughing Animoji fail has gone viral, and you cannot help but love and appreciate her attempt (even while you're fighting back laughs). Let this be a lesson to everyone: Sickness and Animojis don't mix.

Naomi Sinclair, also known as Twitter user @nmariesinclair, decided to provide her followers with a little levity. She wrote, "y’all. my momma was trynna send my sister an animoji and this is what happened. i died." Before clicking the video, it's obvious that the tech-savvy attempt did not go well — but with a caption so enticing, how can you possibly resist a look?

It turns out no one could resist this hilarious 10-second clip. The footage has been viewed over 6 million times, liked over 300,000 times, and retweeted about 140,000 times. Sorry, Mama: We know you had good intentions when you began, but your Animoji fail was too social-media worthy to pass up.

"I knew it would get a good amount of retweets and looks but I didn’t expect for it to get this big a lot of people actually found it funny," Sinclair tells Elite Daily. Her mom's video begins with the rainbow unicorn saying, "Hey Princess, I'm on my way home. I'm getting the Chick-fil-A, OK?" Before this poor woman could get the words out, she began coughing uncontrollably... so obviously that made for a pretty peeved unicorn. To make matters all the more hilarious, mama ended the message with, "Sh*t."

Have a look at the coughing unicorn Animoji and try not to laugh.

Naturally, people fell in love with the Animoji gone wrong, and it's hard not to. What started out so sweet and innocent turned into quite a problem. Apologies for laughing at this poor woman's expense (we just couldn't help it).

One viral video didn't seem to be enough, though. Sinclair's mama returned — this time as a rabbit — to try to make the situation a little bit better... and only made it worse. A pissed-off bunny frowning appeared, saying, "Naomi, your mom has bronchitis, and you made me go viral." Hence another coughing fit and "sh*t" for the bunny Animoji video.

Ready for Round Two?

Of course, people are loving the video.

Apple is taking our methods of communication to new levels, all thanks to the iPhone X's most fantastic feature: Animojis (which were made possible through Face ID) If you were gifted with one of these snazzy devices during the holiday season, it's time to get up to speed — your very own coughing animal awaits. Don't you want to be the next hit on Twitter?

First thing's first, the facial identification system — which allows users to create Animojis — was implemented to do away with the home button on iPhones of years past. Thanks to this new feature, all you need to do is sit there and look pretty and the phone will unlock based on appearances (though it might be a little bit of a challenge for those who have an identical twin). The days of plugging in a six-digit code are gone, folks.

But let's be honest here, the fact that you can bring your favorite emoji to life thanks to Face ID is by far the coolest aspect of this feature (yeah, phone security is cool too, I guess). When you think about it: Where were we before the coughing unicorn and bunny video? There's a reason this went viral, friends. If we're being honest with ourselves, we all want a viral unicorn video, too.

But if you got an iPhone 8 under the tree and not the X, don't fear — you can still get some sort of talking/coughing/sneezing animal to appear. You are able to share Animojis via iMessage between any iOS and Mac devices, so don't let anyone rub their smiling pig or laughing cow in your face. (In other other words, if you have an iPhone 8, 7, etc. you can receive Animojis, but sadly you cannot make or send them).

Here's to the next viral Animoji. Keep 'em coming.