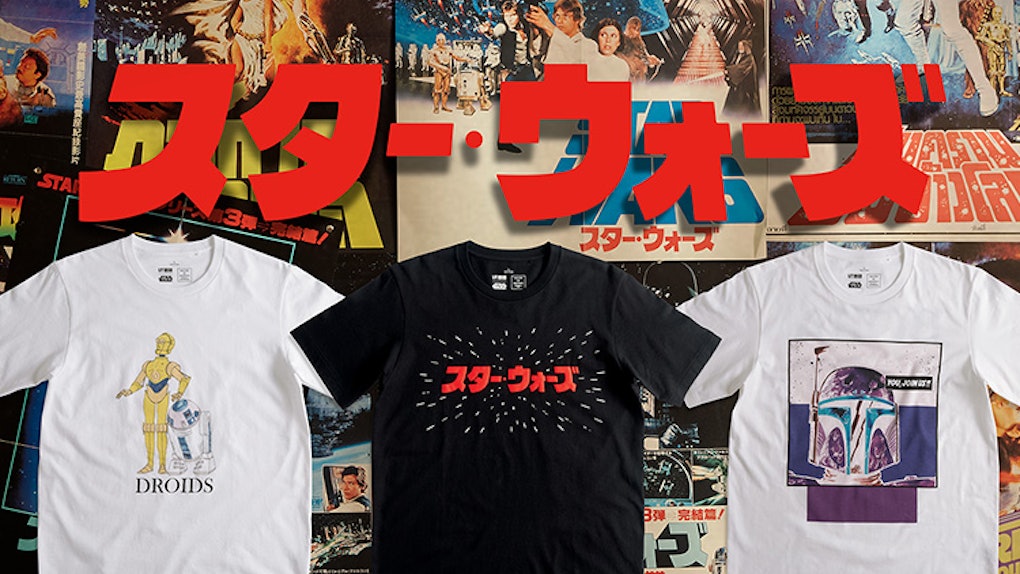 If you nerd out over a certain iconic space-opera featuring Jedi, Wookiees, and the like, then you're going to freak over an upcoming fashion drop. A Uniqlo x Star Wars collection is on its way to grace super fans and streetwear geeks alike, and I guarantee that once you get a glimpse of its fresh and unique designs you'll wan tot wear it all summer long.

A Master of Graphics UT Collection, the lineup of products includes 18 graphic tees that have been designed by some of Japan's most respected streetwear artists. Jun Takahashi, Tetsu Nishiyama, NIGO each created five Star Wars-inspired styles featuring their own unique spin and the results are nothing short of epic. I'll get to the specific designs of each visionary in a minute, but first know that the tees range from $9.90 - $14.90—this pricing is a total steal considering the quality of Uniqlo's products and the experience of each designer, so don't miss out on snagging one. The line will be available to shop in Uniqlo stores and online starting Monday, April 29, so peruse the tees below, pick out a few of your favorites, and prepare to take your summer style out of this world.

Takahashi is the founder of UNDERCOVER, a label that designs collections for both men and women that are often bursting with color and blur the lines between high fashion and streetwear. For this collaboration, he focused on droids R2-D2 and C-3PO as his muses. “I fondly remember Star Wars as the first science fiction movie I saw in my childhood. The characters and prop designs are endlessly novel and fascinating. As a long-term fan, I was delighted and honored to take part in this project. I used a cartoon series I really loved as a design motif,” said Takahashi in a press release.

“Star Wars and Lucasfilm had a tremendous impact on me," revealed Nishiyama, the founder of streetwear labels WTAPS and DESCENDANT, in a press release. "Even today, the figures and other merchandise in particular appeal to me as a fan and creator. So, when asked to take part in this project I was determined to put my heart and soul into it as a Star Wars fan.” Nishiyama takes a more traditional approach to his designs, creating tees and hoodies as well as upscale workwear-inspired jackets, bags, and the like. Hi expertise at punchy and innovative graphics come through in his tees for Uniqlo.

Nigo, UT Creative Director & Founder of HUMAN MADE and BAPE

Women's, men's, and children's brand BAPE (AKA A Bathing Ape) might be one of Japan's most widely known streetwear exports, and Nigo is the man behind it. “I adored Star Wars films so much that I grew up around them. They were all great, but episodes IV, V and VI stood out most. I loved the scene in which Greedo appeared, although this was where Han Solo blasted him. The exchange between the characters and the rhythm of Greedo’s speech were superb. I want people to enjoy quotes from Greedo and Yoda on the UTs,” explained Nigo of his design inspiration for the collaboration.

May the force be with you to choose your favorite.