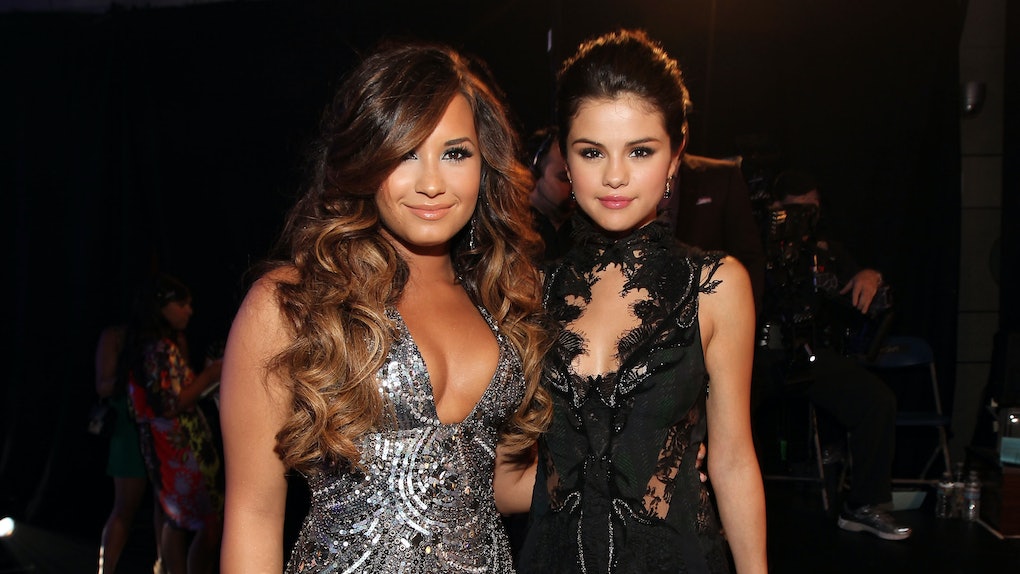 Selena Gomez and Demi Lovato were thrust into the spotlight at a very young age. They went on to have similar careers, and they deal with similar challenges when it comes to the pressures of fame. Luckily, they had each other to lean on along the way. But, like most besties, the pair went through ups and downs as they made new friends, dated, and grew as individuals. That's why Selena Gomez and Demi Lovato's friendship timeline is truly complicated.

Fans have long watched Gomez and Lovato go through their rollercoaster friendship in the spotlight, and they've become super invested in it. Join me on this look-back at Gomez and Lovato's complicated relationship.

Gomez and Lovato first met when they were both 7 years old waiting in line to audition for the iconic children's TV series Barney & Friends. After they both landed roles, they became fast friends, according to director Fred Holmes.

"Very early on, you could just tell they clicked," Holmes told International Business Times in September 2017. "Certain kids got along with other kids and they were just two of those that really clicked. They were pretty inseparable and ate lunch together and all those types of things."

Shortly after Gomez landed the role of Alex Russo on Disney Channel's Wizards of Waverly Place and Lovato starred as Sonny Munroe on Sonny With a Chance, the two started a YouTube channel together.

"This is my best friend in the entire world," Lovato gushed in their first video. The girls' videos ranged from Q&A's to funny, filtered videos, and everything in between.

Gomez and Lovato starred as Carter and Rosalinda, respectively, in the Disney Channel original movie The Princess Protection Program. Proving their chemistry was just as strong on screen as it was off screen, 8.5 million viewers tuned into the movie's premiere, making the Disney Channel the most-watched network for its time slot. The film went on to win the Teen Choice Award for Choice Summer TV Movie.

Gomez and Lovato graced the cover of People together in July 2009. Inside the mag, the singers posed for adorable BFF pictures and answered questions about their friendship. "We enjoy doing everything together," Gomez said. "But our favorite is to just chill at each other’s houses."

As Gomez developed a friendship with Taylor Swift, there was a marked change in the tone and consistency of Gomez and Lovato's public interactions.

"We're both busy, and I wish the best for her," Lovato told Girl's Life in June 2010. "True friends don't let their friends or family be mean to you. If you can't trust somebody, you can't be friends with them."

2011: Putting The Hard Feelings Behind Them

After Lovato underwent treatment for bulimia and self-harming in 2010, she revealed Gomez was one of the first people who reached out to her while she was recovering.

"[Selena] called me crying when I was in there and was just so worried," Lovato said in an interview with Female First U.K. "I was like, 'Look, I should be the one crying, it's all good!' But she was so worried and ever since then, we've gotten closer."

Although they'd rekindled their friendship, during an interview with MTV in May 2013, Lovato revealed how her relationship with Gomez has evolved over the years.

“We’ve been through a lot together, we’ve had periods of times we here we grew apart and we just didn’t really talk,” Lovato explained of their ever-changing bond. “Now we are in a place where I think we realized that life is so short and that when you have people in your life that love you so much then, you should just always be around them. She’s going to be a big sister, and I want to be around for that. Everything about her, she has a great soul, she’s talented, she’s beautiful, and she will always be really, really close to my heart.”

Eagle-eyed fans noticed Lovato unfollowed Gomez on Twitter and Instagram in July 2014. One month later, Lovato explained why during a Watch What Happens Live interview.

After nearly 15 years of on-and-off friendship, Lovato and Gomez looked as happy as could be while attending the InStyle Awards in October 2017. Fans went wild over their red carpet reunion, hoping this meant the pair were BFFs once again.

In the wake of Lovato's overdose in July 2018, Gomez told Elle Magazine: "All I’m saying is, I reached out personally. I didn’t do a public thing. I didn’t want to. I… I love her. I’ve known her since I was seven. So… it’s… that’s what I’ll say."

Through the good times and the bad, Lovato and Gomez seem to always find their way back to each other.