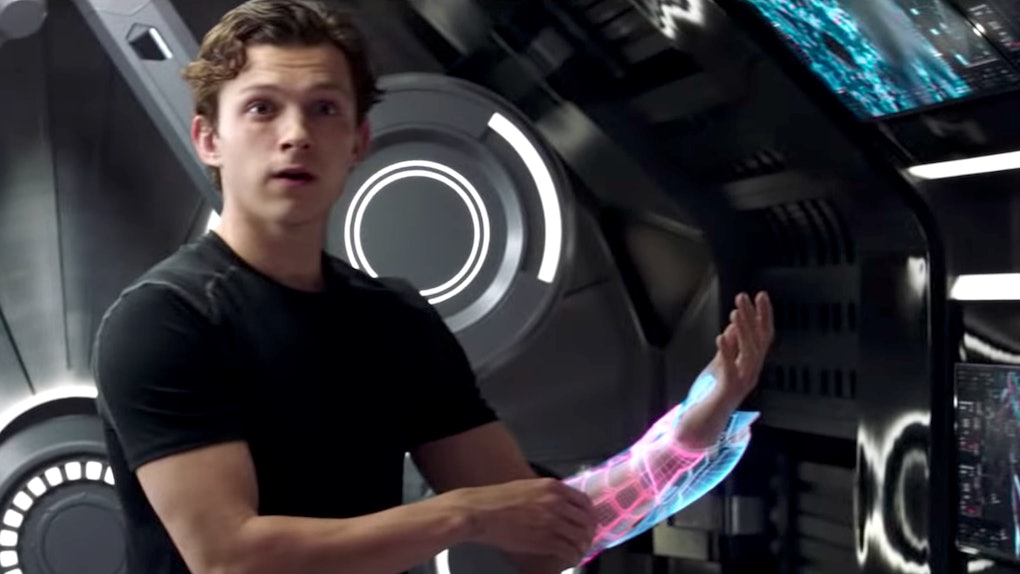 This 'Spider-Man: Far From Home' Trailer Has A Tony Stark Easter Egg That Will Make You Cry

Spider-Man's introduction into the Marvel Cinematic Universe was filled with a lot of fun and energy, but the latest trailer for Spider-Man: Far From Home reveals that the upcoming sequel will focus on Peter Parker dealing with a lot more grief and darkness than ever before. And to make things even more emotional, some eagle-eyed Marvel fans have noticed that the Spider-Man: Far From Home trailer has a Tony Stark easter egg that is super subtle, but very powerful.

Spoiler alert: This post contains spoilers from Avengers: Endgame. The Marvel Cinematic Universe has been forever changed by the events of Avengers: Endgame, and the first movie to move the superhero franchise into its new future will be Spider-Man: Far From Home. Now that Endgame has finally been released, the latest Spider-Man trailer is all about the effect that Tony Stark's shocking death has taken on Peter Parker, who looked up to Tony as both a mentor and a father figure.

There are plenty of scenes revolving around Peter's grief over Tony's death in the new trailer, including him gazing up at a mural of Iron Man and tearing up with Happy Hogan, but one of the most touching moments of all may have gone by unnoticed by many fans. In a brief scene towards the end of the trailer, we see Peter lower a pair of thick-rimmed glasses in surprise. Superfans were quick to point out that these glasses are the same ones that Tony Stark would often wear, meaning that Tony left his glasses for Peter after his death.

Although we do not know the full story of why Tony Stark gave Peter Parker his glasses yet, it seems likely that this is just one of the gadgets that Tony may have entrusted to Peter in his will. After all, Tony's shades are for more than just eyesight — they also connect to his supercomputer J.A.R.V.I.S. and have other high-tech capabilities. The trailer also shows Peter wearing the Iron Spider suit that Tony made especially for him rather than his usual Spider-Man suit, which is another homage to his fallen mentor.

As these homages in the new trailer show, Tony Stark's death will be a major part of Peter Parker's story in Spider-Man: Far From Home. So much so, in fact, that at the end of the new trailer, Peter even contemplates becoming the next Iron Man himself.

Like Avengers: Endgame, Spider-Man: Far From Home will be majorly important in setting up the next phase of the Marvel Cinematic Universe. Marvel recently revealed that the Spider-Man sequel will serve as the final part of the franchise's Phase 3, rather than the first entry into the mysterious Phase 4. And the new trailer also teases some groundbreaking changes that the MCU has planned for its next phase. Most notably, Nick Fury tells Peter that Tony's snap ripped a whole in the universe, exposing a vast multiverse of different mirror dimensions. Fans are already guessing that this newly introduced multiverse will play a huge part in Phase 4, including a possible opportunity to introduce Disney's newly attained Marvel heroes like the X-Men, Deadpool, and the Fantastic Four.

All will be revealed with Spider-Man: Far From Home swings into theaters on July 2.