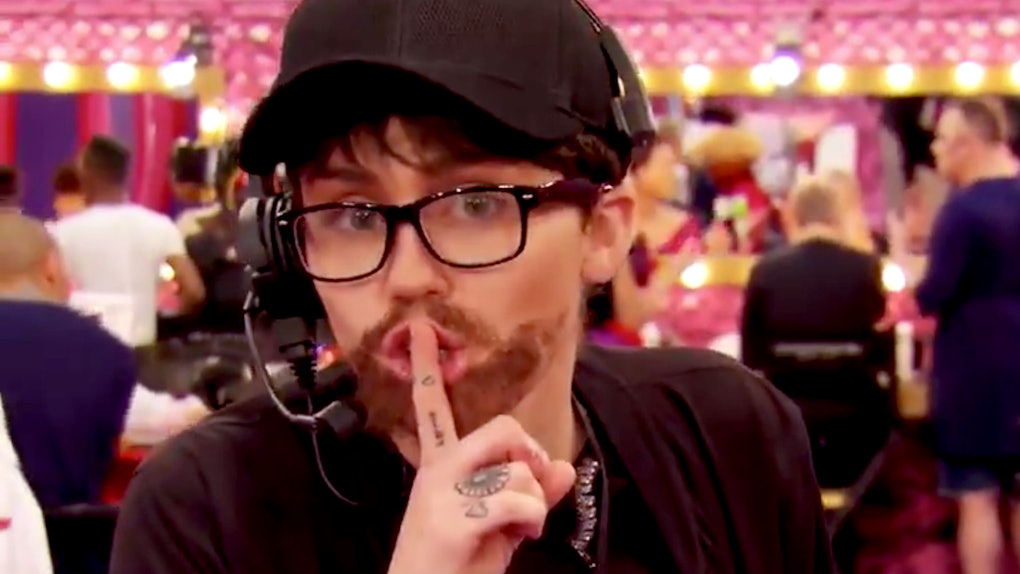 Miley Cyrus is trading in her blonde Hannah Montana wig for some brown facial hair for her next undercover character. RuPaul's Drag Race recently revealed that Cyrus will be the first guest judge on Season 11, and the pop star got into the spirit of the show by dressing up in her own version of drag for the season premiere. Check out this first-look RuPaul's Drag Race clip of Miley Cyrus dressed as a man to go undercover and spy on the queens in the Season 11 premiere.

In a new clip from the RuPaul's Drag Race Season 11 premiere, Miley Cyrus completely transforms herself into her male alter-ego, Barry Johnson, or B.J. for short ("You know why," she adds with a wink). Cyrus shared the video clip on her Instagram, and it shows her working with Drag Race's producers to disguise herself as a production assistant so she can spy on the Season 11 queens in the workroom without them knowing that a pop superstar is among them. To become B.J., Cyrus puts her hair up under a black cap, throws on some glasses, and most importantly, covers her face with a mustache and beard. Check out Miley Cyrus in character as B.J. in the clip below:

And that is not the only clip we have of B.J. sneaking into the workroom. RuPaul's Drag Race also shared a short video of Miley Cyrus putting her disguise to the test. In the snippet, Cyrus successfully adjusts returning queen Vanessa Vanjie Mateo's mic pack without getting found out, and she even puts her Drag Race superfandom on display by silently quoting Mateo's iconic "Miss Vanjie" moment while backing away. Cyrus also go a look behind the two-way mirror at the make-up station.

This guest spot has been a long time coming for RuPaul's Drag Race fans, and for Drag Race superfan herself, Miley Cyrus. The singer is a very vocal fan of the reality show, even showing up in the live audience for the Season 7 finale. She is also friends with several past competitors, and famously worked alongside a number of Drag Race queens for her performance of "Dooo It!" at the MTV Video Music Awards.

Miley Cyrus' disguised entrance into the workroom mirrors Lady Gaga's guest spot on the Drag Race Season 9 premiere. But rather than disguising herself as a production assistant, Lady Gaga entered the room pretending to be a fellow drag queen — that trick did not last very long, though.

Clearly excited for the big premiere, Miley Cyrus shared a few more photos of herself dressed up as B.J. to her Instagram.

RuPaul's Drag Race Season 11 promises to be the biggest season in the franchise's ten-year history, with 15 queens competing for the crown, which is more contestants than ever before. You can get a full rundown of the Season 11 cast here, including Season 10 fan favorite Vanessa Vanjie Mateo, who is returning for this season. Season 11 of RuPaul's Drag Race premieres Thursday, Feb. 28 at 9 p.m. ET on VH1.