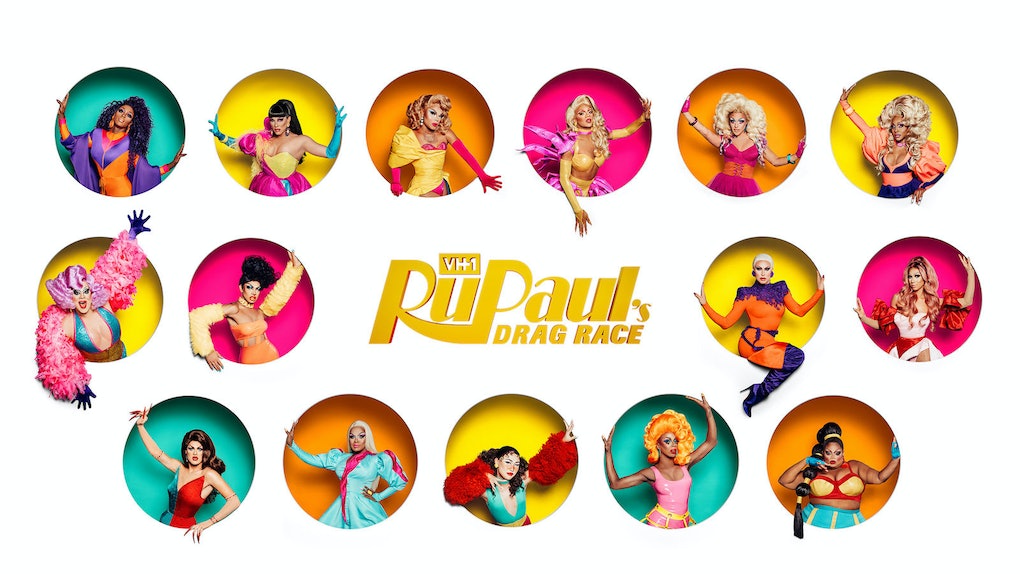 The 'RuPaul's Drag Race' Season 11 Cast Is Here, Including A Returning Fan Favorite

RuPaul may still be in the middle of welcoming a fourth queen into the All Star's Hall of Fame on the currently airing RuPaul's Drag Race All Stars 4, but a fresh batch of drag queens are already preparing to snatch the next crown. VH1 revealed which drag stars will be competing for the crown in the upcoming eleventh season of RuPaul's Drag Race, and with 15 queens in the running, Season 11 is officially the biggest season of Drag Race ever! So before you tune into the new season, get familiar with the RuPaul's Drag Race Season 11 cast right here.

The official announcement of the RuPaul's Drag Race Season 11 cast happened live on VH1's YouTube channel on Thursday afternoon. Olympic superstar Adam Rippon and the current reigning Drag Race winner Aquaria co-hosted the announcement, along with conducting interviews with the new queens. But not all of the queens are new to the show. While the most recent seasons of Drag Race have capped off at 14 contestants, Season 11 introduced a fifteenth queen into the race after revealing its 14 newcomers. That's right — Vanessa Vanjie Mateo, better known by her now iconic catchphrase "Miss Vanjie," is back for another chance at the crown. Fans of the show know that Miss Vanjie was the first queen eliminated in Season 10, so she is back to try to make it much further than her first attempt.

Now let's get into this new cast. First, check out the newly released trailer for RuPaul's Drag Race Season 11 below, and then get a closer look at the queens of the new season, with some get-to-know-you summaries provided by VH1:

A life-sized Bratz doll, this queen’s Jersey-licious Disney princess aesthetic is already a hit on social media, where she has a significant following. But don’t be fooled by a pretty face with a poppin’ Instagram presence – Ariel can sing, act and put on a fully entertaining show. You’ve been warned.

Brooke Lynn grew up in Toronto, Canada before traveling the world as a professional ballet dancer. Much of her drag centers around dance and movement and she is a prestigious former Miss Continental pageant winner. Will Brooke Lynn dazzle the judges with the same polish she brings to the dance floor?

New York City’s crown jewel, Honey is the second cast member hailing from the legendary House of Davenport and cites Drag Race alum Sahara Davenport as a mentor. With parts in Off-Broadway plays, an electro band and 18 pageant crowns under her belt, queens know to bow down to this talented diva.

This African princess moved from Kenya to the USA when she was 11, but Mercedes wasn’t “born” until 10 years later at the world famous Gay 90s club in downtown Minneapolis. All about the “body-ody-ody,” Mercedes owns any stage she sets foot on, dazzling the crowd with her graceful presence and the expensive bling she is named after.

This comedy queen has a big reputation preceding her into the competition. Nina has won the national Entertainer of the Year pageant and writes and produces her own spectacular shows complete with show-stopping dance numbers. She’s also an advocate and fundraiser for LGBTQ causes. But can this local legend live up to all of her hype?

Originally hailing from Saigon, Plastique takes a lot of drag inspiration from Vietnamese pop stars. Stunningly beautiful, her popular Instagram drag photos have even been reposted by Tyra Banks. With none other than Drag Race superstar Alyssa Edwards for a drag mother, all eyes will be on Plastique to see if she can deliver in the competition.

Ra’jah is from Dallas, Texas, where everything is bigger, better and bolder. A dancing queen known for her kicks, splits and tearing up the dance floor, the “D” in Ra’jah’s name stands for Davenport: this season’s third cast member from the Davenport dynasty. A high energy performer, Ra’jah warns her competitors to watch their backs when she is lip-synching.

Southern beauty mixed with New York City grit, Scarlet pulls from references as varied as movie stars of the 40s, Andy Warhol superstars of the 60s and supermodels of the 80s. A self-described “natural beauty,” Scarlet has worked with fashion photographer Steven Klein, Harper’s Bazaar magazine and even appeared in a musical number on Saturday Night Live.

A relative newcomer to drag, Shuga quit her sweet six-figure corporate job to become a full-time drag queen. But talent rises to the top, and within 18 short months Shuga has already established herself as a key fixture in the competitive New York City drag scene where she relies upon her performance background in opera and musical theater to stand out from the crowd.

The life of the party, you always know when exuberant “Big Silk” is in the building. But scratch the surface of this gregarious queen and you’ll find a softer side to Silk– one who was raised in the church, has a Master’s Degree in Organizational Leadership and is even on her way to becoming a Doctor of Philosophy. Let’s hope her accolades translate into success in the competition.

Raised in Korea, Soju brings Korean influences into her drag, be it colorful crazy K-Pop aesthetics or Taekwondo martial arts weapons. Producer and star of the popular YouTube show “Shot With Soju,” where queens spill the beans about their time on Drag Race, Soju comes into the competition fully prepared for her own shot at the crown.

Miss Vanjie. Miss Vaanjie. Miss… Vaaanjie! Never have more iconic words been uttered by a departing queen. Despite being the first queen eliminated from Season 10, Vanessa’s mesmerizing backwards exit inspired memes, tweets and celebrity shout-outs and an overwhelming demand to see more of this charismatic queen. She’s back with a Vanjeance, but can the queen live up to the memes?

Denver’s “commodity of drag oddity,” shock queen Yvie bucked her boring local drag scene and brought conceptual artistry into the mix. Tall and weird (her words), Yvie draws inspiration from fashion muses like Thierry Mugler, and drag stars like Christeene. Known for bringing her brain to the table, anyone who encounters Yvie is guaranteed to end up with their jaw on the floor.

VH1 has not yet announced a premiere date for RuPaul's Drag Race Season 11, so stay tuned.