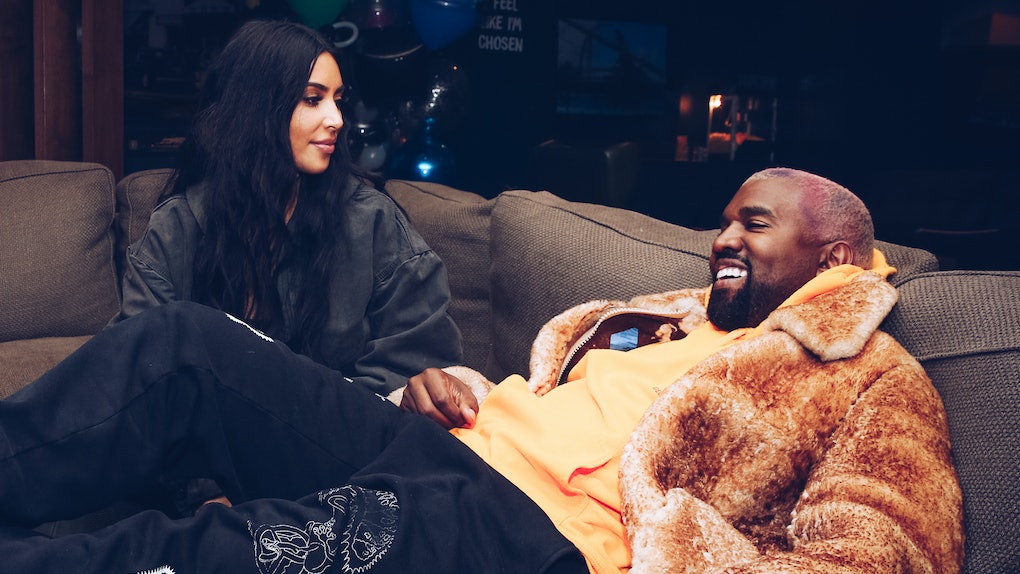 This Photo Of Kanye West's 2019 Valentine's Day Gift For Kim Kardashian Is So, So Saxy

Of all the holidays we get to celebrate, Valentine's Day falls somewhere in the middle for me. Is it as fun as Christmas? No. Is it as delicious as Thanksgiving? Nope. But it's, at least, more rewarding than, say, Flag Day. If you're lucky, you'll get some candy and a card, and perhaps a fun date night. Or, if you're Kim Kardashian, you'll get a legendary performer just chilling in your house playing romantic tunez on a saxophone. Confused? Of course you are! You're going to want to check out this photo of Kanye West's 2019 Valentine's Day gift for Kim Kardashian, because I have a feeling you've never seen anything like it before.

Instead of burning a CD with a romantic playlist, rapper Kanye West wanted to really impress his Keeping Up with the Kardashians star wife. If you want to know how exactly he got that job done, I'll tell you: he hired famous saxophonist Kenny G to come into their home to gift Kim Kardashian a private performance. Totally not a big deal, right?

Kardashian took to Twitter on Feb. 14 to share a video of Kenny G playing his song "Forever in Love," where he was fully surrounded by various colored roses in single vases all over the floor.

"NO BIG DEAL KENNY G IN MY LIVING ROOM!!! Happy Valentines Day," Kardashian wrote, clearly understanding that it was, in fact, a very big deal.

Now you can listen to the sweet, sweet sounds of Kenny G:

Our girl must have been in a generous mood, because she then uploaded a second video, where you can hear Kenny G performing his own rendition of The Wizard of Oz’s "Somewhere Over the Rainbow."

Her last tweet was a still photo of Kenny G mid-performance, and honestly, Kanye West is sort of a genius for creating this entire scene:

"Best husband award goes to mine!!!! Most thoughtful gifts ever!!!!" she wrote.

Honestly? She's not wrong. Kanye did a really good job of doing something that's over-the-top but still super meaningful. I'm pretty impressed, and I'm pretty sure anyone else who sees this feels the same.

This isn't the first time that Kanye West has wowed his wife with romantic Valentine's Day gestures. Back in 2017, the rapper had a wall of white orchids and roses created in their New York City apartment, and back in 2014, he gave her 1,000 red roses.

Because why just order a dozen red roses when you can order hundreds upon hundreds of them?

But don't go thinking that Kardashian didn't show her love for her husband today. The reality star took to Instagram to post two never-before-seen photos of the couple.

"Happy Valentines Day babe!!! I love you so much!" Kardashian wrote in her caption alongside two pictures of the couple together. The throwback photos were cute AF, and maybe made me cry just one tiny tear of joy.

Tell me these are not the most precious and pure photos you've seen of Kim and Kanye. Look at those smiles in the second photo. Smiles, you guys! A true holiday miracle.