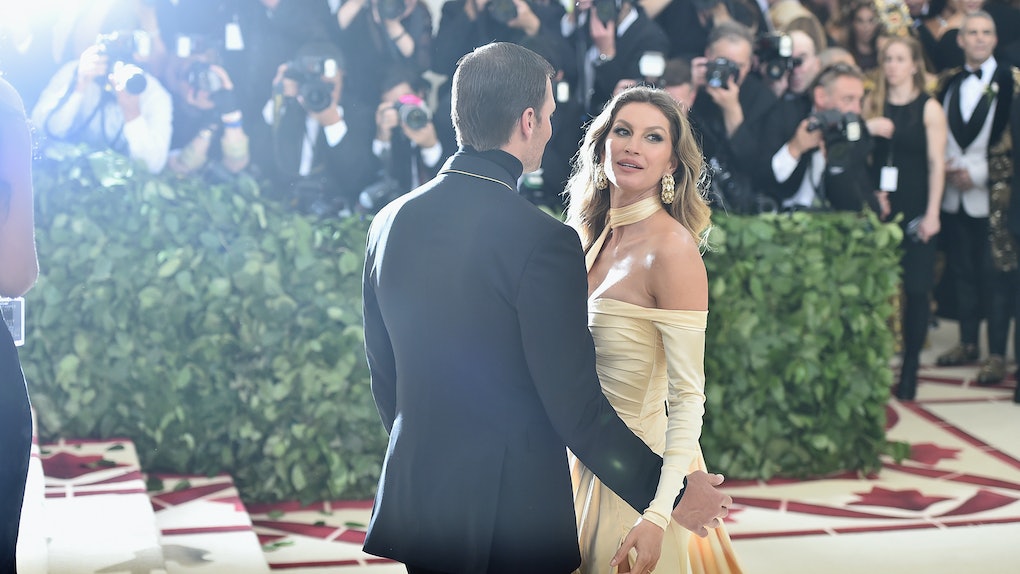 When I think about football royalty, my mind immediately falls on the one and only Tom Brady and Gisele Bündchen. In tonight's Super Bowl LIII, the Los Angeles Rams faced off against the New England Patriots, for which Brady serves as quarterback. And though the Pats wound up winning 13-3, the real winner is all of us fans. Why? Because this photo of Gisele Bündchen & Tom Brady at the 2019 Super Bowl isn't just proof that this golden couple are a match made in heaven — they're a total #touchdown.

This was Brady's ninth Super Bowl, and Bündchen has been very vocal about her husband's reluctance to retire. " I haven’t been very successful," Bündchen told Ellen Degeneres during a Dec. 2018 taping of the The Ellen DeGeneres Show. I want him to do whatever makes him happy, but maybe if you have a conversation with him." The supermodel went on to say that she wouldn't "want to have his job," because it takes a tremendous physical and psychological toll on the players. Ultimately, whatever Brady decides to do, his wife will be cheering him on from the sidelines. What can I say? They make a great team.

The picture that has captured everybody's hearts depicts Bündchen embracing Brady right after his big win — in fact, his sixth Super Bowl win to date! In the photograph, their lips are locked and their bodies intertwined, despite the many people, cameras, and devoted fans who are desperately trying to wedge their way into the frame. It's clear that when it comes to love, Brady has his eye on the prize — and only MVP ring he needs to be wearing is his wedding ring.

When it comes to Bündchen, the supermodel and devoted Pats cheerleader was notably MIA for the majority of the game. Our theory? That Bündchen may have opted to remain out of the limelight this year, after a significant amount of coverage that swayed attention off the field and into the stands last year. Despite avoiding the flashing cameras and doting fans while cheering her hubby on from the bleachers, she couldn't help but storm the field after the Pats' victorious win. And it's clear from this dreamy photo that no matter who takes home tonight's trophy, in Bündchen's eyes, Brady is MVP on and off the field.

Bündchen was also joined by her daughter, Vivian, and son Benjamin, who leapt into Brady's arms and cheered for their father's success. And what can I say? The two were naturals in front of the camera. I wouldn't be surprised if, in a few years, we were all tuning into watch a reboot of The Brady Bunch: Super Bowl-style, because they're clearly stars in the making. For now, I'll take whatever tiny, adorable snippets I can get of the Brady family and love they clearly have for each other . Now, if you'll excuse me — it's way past my bedtime. Goodnight, folks! See you next year, when Brady will likely play and win once more.