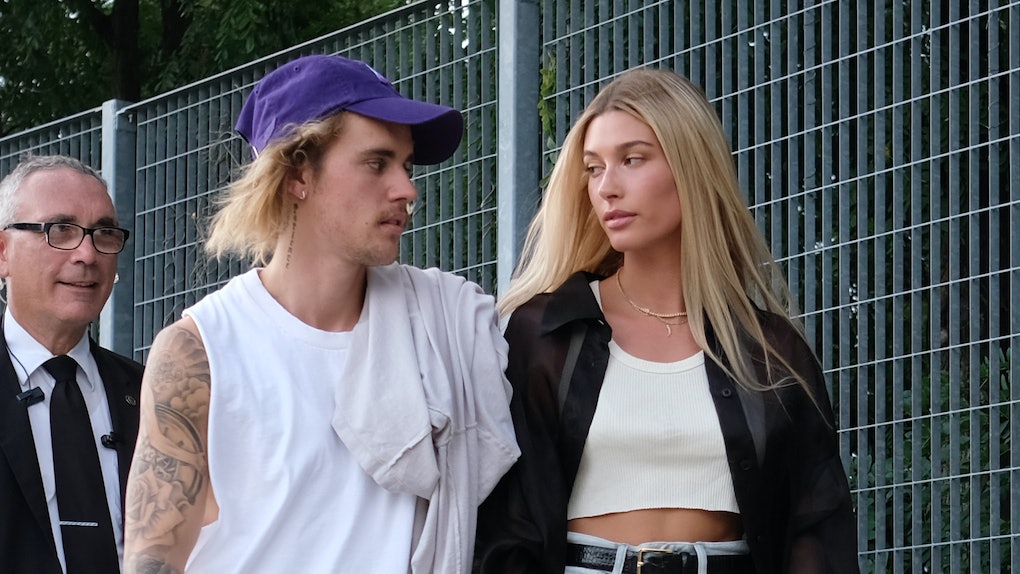 If you're still mourning the sudden end of Ariana Grande and Pete Davidson's quicker-than-quick engagement, Justin Bieber and Hailey Baldwin are here to remind you that young love is very much alive and well. A couple weeks after reportedly tying the knot during a civil ceremony, it looks like (potentially) married life definitely agrees with the couple, especially judging by the "Sorry" singer's latest Instagram post that's completely dedicated to their romance. This new photo of Justin Bieber and Hailey Baldwin kissing has fans completely losing it, and it will make you beliebe (sorry) in love again after a year of tough celebrity breakups. Plus, I'm still screaming over Bieber's adorable nickname for Hails.

On Friday, Nov. 9, the Biebs had love on his mind as he took to Instagram to bless fans with a visual reminder that there's one less lonely girl in the world. The black-and-white photo shows the couple passionately embracing and kissing each other as if there's no one else in the world, and I can't handle all the love that's on display in that moment. If the rare PDA moment wasn't enough to tug at our heartstrings, the singer also revealed his secret pet moniker for Baldwin. He sweetly captioned the candid, "Hunny buns punkin." Needless to say, I totally stan this, and so do Beliebers all around the world, who've flooded the image with approximately 6 million likes and counting at the time of publication.

In just a few hours, Bieber's latest image showing the pair packing on some serious PDA is fast encroaching on his previous posting with Baldwin: An Aug. 15 image that showed the ever-stylish duo showing off their unique streetwear threads as well as Bieber's oft-discussed shoulder-length hair and 'stache.

Bieber's model love has previously made her feelings on this look known (spoiler: she's not a fan), and the "What Do You Mean?" hitmaker finally shaved off his mustache and his long blonde hair on Oct. 30. Now it looks like the buzzed, clean-shaven look is Instagram official, and fans are totally digging it.

Bieber's dramatic new makeover is pretty sudden, and it's making me question whether their wedding ceremony in front of family and friends could be happening sooner rather than later. While previous reports have claimed that the pair are in fact already legally married after making things official at a courthouse, nothing's official yet, despite the fact that he's apparently referred to her as his "wife" in public and Baldwin has already trademarked Bieber's last name. Elite Daily previously reached out to both Bieber and Baldwin's team to inquire about the report that they were already married but did not hear back by the time of publication.

For now, fans will be keeping their eyes peeled for an official announcement on their Instagram accounts, but this loved-up shot does seem to hint that the couple is in seventh heaven right now. Plus, if that's not the look of newlywed or soon-to-be wedded bliss, I don't know what is.