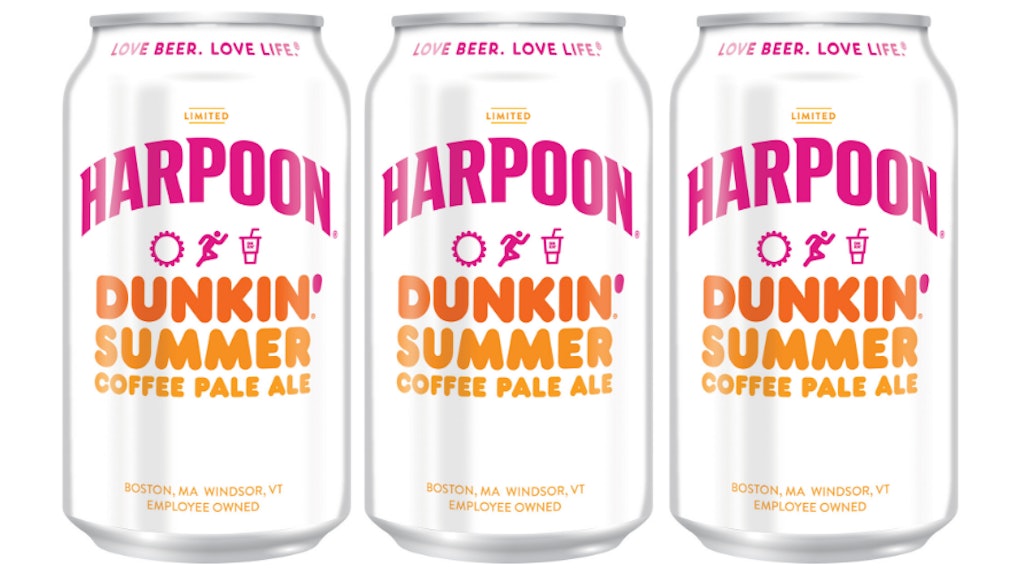 Stop the presses, because Harpoon and Dunkin' are back at it with another top-notch brew release for your upcoming summer plans. This new Harpoon Dunkin' Summer Coffee Pale Ale collaboration combines the best of both worlds: iced coffee and beer. The exclusive new brew is only going to be available for a limited time in select locations, so pay close attention. Here's the scoop on the latest joint beverage offering from Dunkin' and Harpoon Brewery.

On Thursday, April 4, Dunkin' and Harpoon announced the news of its most recent collaboration. The Harpoon Dunkin' Summer Coffee Pale Ale is a limited edition run that's available starting on April 4, according to Harpoon Brewing. The new coffee beer will be sold in 12-ounce cans, as well as on draft, at select retail locations throughout the eastern region of the United States until summer, according to a press release issued by Harpoon Brewing. So, while you've got plenty of time to sip on this one for now, just know that the clock is ticking. No official end date was given. Hopefully, this one will be sticking around at least through Labor Day Weekend (aka the unofficial end of summer).

I love a good pale ale, and this one from Dunkin' and Harpoon sounds like it's going to be a refreshing sip this summer. The 5.9 percent ABV Summer Coffee Pale Ale is a "hoppy tribute to Dunkin's signature Iced Coffee" bringing together flavors from Dunkin's Original Blend mixed with Harpoon's bright and summery pale ale, according to the brewery.

It's not uncommon to start your day off with a cup of coffee. In fact, a 2017 survey conducted by the National Coffee Association found that 62 percent of Americans drink the caffeinated brew on a daily basis. I'm definitely well represented in this survey. I always have *at least* one cup of coffee every morning — and even in the afternoons. But, come 5 p.m., it's usually time to switch to a different beverage. Between after-work happy hours and evening get-togethers with friends, I'm ready to have a drink. Which is why it's a completely genius idea that Dunkin' and Harpoon have teamed up yet again to launch another new coffee-infused beer to sip on. It really does combine the best of both worlds.

The two New England-based brands came together on their first collaboration last fall. In October, Dunkin' and Harpoon Brewery announced the release of the Harpoon Dunkin' Coffee Porter. This brew couldn't be more different from the Summer Coffee Pale Ale. According to Dunkin', the Coffee Porter beer has notes of dark chocolate and espresso. It's a well-balanced brew that offers robust and roasted flavors that are perfect for sipping on by the fire.

I know spring just started, but summer isn't all that far off. I look forward to the warmer weather for many reasons, but mostly because that means it's time for some of my favorite outdoor activities. Whether I'm out on the lake with friends, sitting by the pool, or just hanging around on the patio on a weekend afternoon, the new Harpoon Dunkin' Summer Coffee Pale Ale sounds like it's going to be the perfect sip for the sunny season.