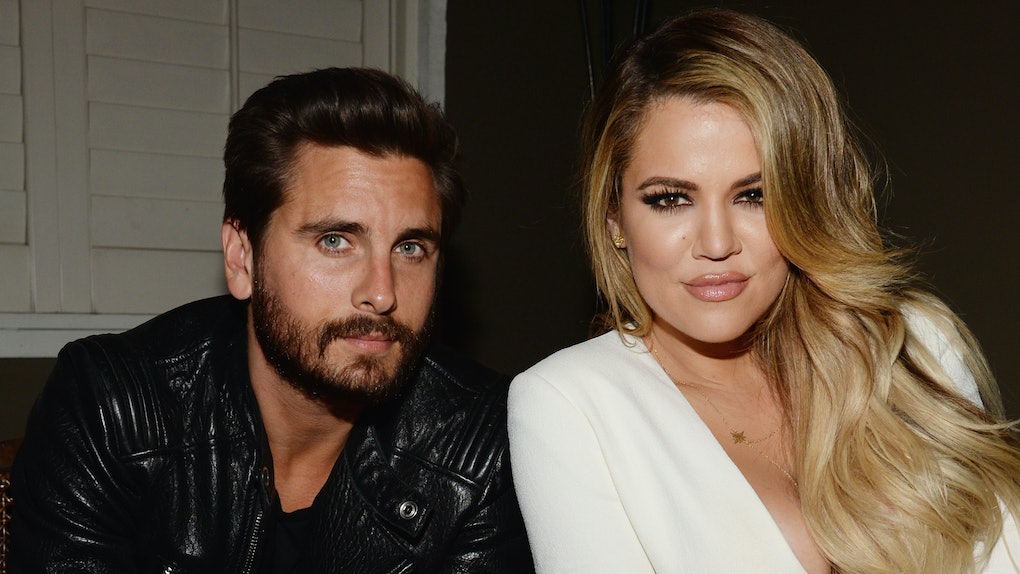 Everyone has their favorite characters on Keeping Up with the Kardashians, but Khloé Kardashian and Scott Disick are arguably one of the show's most entertaining duos. In addition to serving up hilarious quips and meme-worthy sayings, the self-professed "best of friends" now have parenthood in common after the fitness guru gave birth to True just over a year ago. Disick is taking his uncle responsibilities pretty seriously, and this KUWTK clip of Khloé Kardashian and Scott Disick playing with True promises that the Sunday, May 5 episode of the show will be a heartwarming one.

On Sunday, the reality star previewed that evening's segment by sharing a video of her and Disick hanging out with baby True on Twitter. Unsurprisingly, the toddler's chubby cheeks and adorable smile are the star of the show and take center stage in the 30-second video, which shows Kardashian and Disick playing around trying to make the 1-year-old laugh.

"Mommy's turn," Kardashian says, tapping her mouth with her hand before trying out the trick on her giggling daughter. "How you do that?" Disick teases. "Are you a baby?"

At one point, Disick takes a turn holding True while the mom-of-one dances in the background, then he puts his own spin on Kardashian's dance moves — much to True's delight.

"You're doing all these crazy things that make her want to come to you," Disick protests as True starts to cry in his arms. "I give her one bounce, and you're over there like," he said, miming some silly dance moves. True's reaction is priceless, and TBH, you'll want to watch the adorable clip over and over again.

Again, I'd like to remind you that this is just a few seconds of what you can expect when the newest episode of Keeping Up with the Kardashians airs on Sunday, May 5, and I am already mentally preparing myself for an overload of True cuteness and some on-screen bonding between the longtime friends.

In a 2015 interview with Complex, Kardashian opened up about their close friendship, which has even spurred relationship rumors.

"Well Scott and I — we’re sleeping together apparently," she quipped to the publication before setting the record straight on how she came to be besties with Disick, who previously dated her sister Kourtney Kardashian. "Obviously, we’re the best of friends, but what’s crazy is how much I hated him before. He was a douchey little d—."

She continued, "He still falls off or makes mistakes, which everyone does. I don’t expect anyone to be perfect, but what I like about Scott is that he’s honest about his weaknesses and his strengths."

Disick has proved that he's in Kardashian's corner, taking to Instagram shortly after news broke that Tristan Thompson had reportedly hooked up with longtime KarJenner family friend Jordyn Woods to designate Khloé as his #WomenCrushWednesday. (Woods denied hooking up with Thompson, and Thompson's reps did not respond to Elite Daily's request for comment at the time.)

"Been waiting all week to post this #wcw," he captioned the photo, which showed the reality star dressed in a sheer fishnet top and pants.

From the sounds of things, they have each other's backs, and luckily for us, that extends to parenting duties. Hopefully this is just the first of many more adorable True and Scott videos to come.

More like this
Gottmik Has Already Made 'RuPaul’s Drag Race' History, Win Or Lose — EXCLUSIVE
By Jonathan Borge
Colton Underwood's First Instagram After Coming Out Is Heartfelt
By Corinne Sullivan
Bryce Hall Is Reportedly Being Sued For Starting A Fight At An L.A. Restaurant
By Brandy Robidoux
Stay up to date