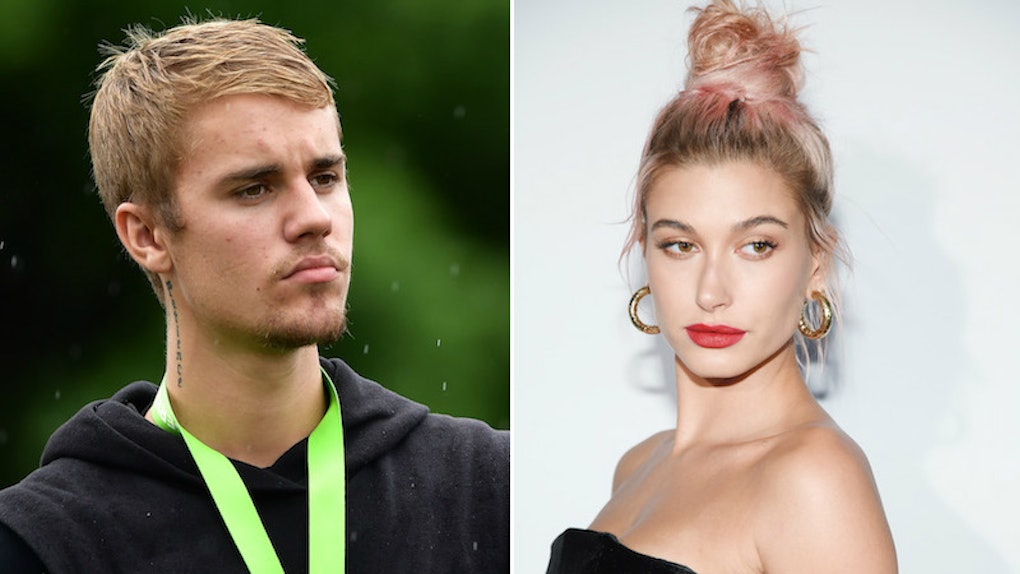 There's no trouble in paradise with Justin Bieber and Hailey Baldwin, but paradise is definitely taking a chill pill. What started as a fast and furious romance between the singer and model seems to have slowed to a much more digestible pace. After just a few months of dating, Bieber popped the question to Baldwin, making it seem like these two were in the fast lane to wedding bliss. Now, this Justin Bieber and Hailey Baldwin wedding update shows they're not moving quite as fast as fans thought they were. Elite Daily reached out to both Bieber and Baldwin's team for comment on their wedding timeline but did not hear back by the time of publication.

Baldwin and Bieber got back together in June 2018 after previously dating in 2016. After just a few short weeks of intense PDA, Bieber confirmed their engagement on Instagram on July 9. As part of his caption, he wrote, "Listen plain and simple Hailey I am soooo in love with everything about you! So committed to spending my life getting to know every single part of you loving you patiently and kindLY... It’s funny because now with you everything seems to make sense!" The love these two outwardly display for one another is so overwhelming, no one would be surprised if we learned their wedding date is right around the corner. However, new sources claim fans won't be hearing wedding bells for some time.

TMZ reports that "sources with direct knowledge" say the pair will be tying the knot officially sometime next year. It's unclear if they mean a year from this summer or once Jan. 1, 2019 rolls around, but still. It's not nearly as close as we all thought. The update comes just a few days after photos of Bieber and Baldwin crying during a bike ride in NYC began making the social media rounds.

When TMZ paparazzi caught up with Bieber leaving Baldwin's apartment and asked him about the pictures, his response was fairly cryptic. The reporter asked, "For the fans who saw pictures of you crying, can you just reassure them everything's OK. Are you doing alright?" Bieber responded by triumphantly holding up a book titled The Meaning of Marriage: Facing The Complexities of Commitment with the Wisdom of God. "THIS," he said. "You got good days and you got bad days. It's not real if you don't have any bad days."

The book's summary states: "The Meaning of Marriage offers instruction on how to have a successful marriage, and is essential reading for anyone who wants to know God and love more deeply in this life." It also claims to provide "the vision of what marriage should be according to the Bible."

Clearly, wedding bells are on both Baldwin and Bieber's minds, but they might just have a little bit more of a methodical approach now that they're here.