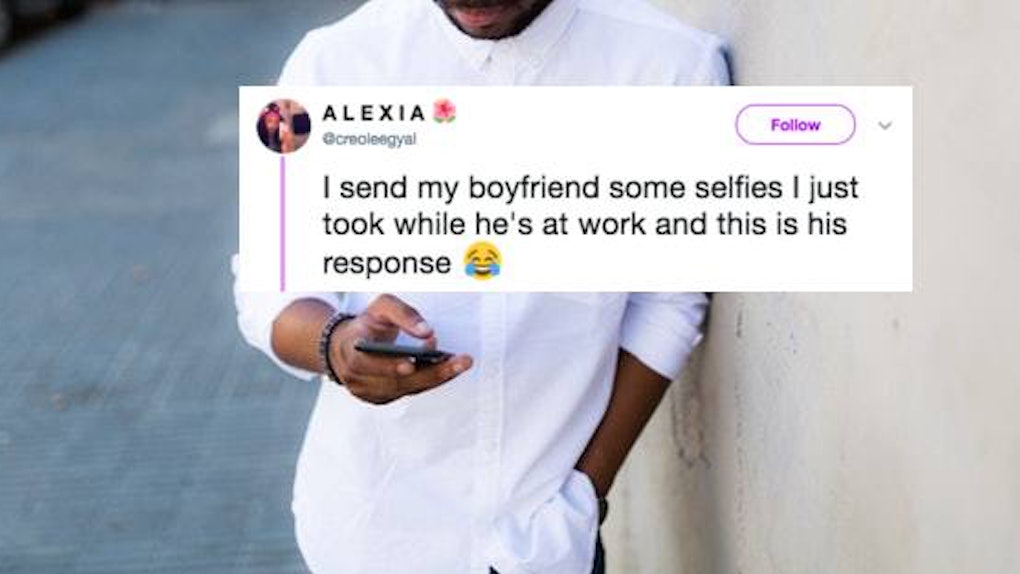 This Guy's Response To His Girlfriend's Selfie Is So Freaking Cute

There are a few ways you can respond to a selfie from your bae. You can send a cute heart-eye emoji. You can send back a funny GIF. You can send them a text saying how cute/hot/sexy/beautiful/handsome they look. You can send a selfie right back. You can even send a flirty bitmoji if you wanted to. Those are pretty much the only ways that popped into my head, and none of them take that much effort. And you know, I thought they were fine! That is, until I came across this guy's response to his girlfriend's selfie, and the bar for selfie responses was forever raised.

A woman named Alexia, who goes by @creoleegyal on Twitter, took a selfie in the bathroom and decided to send it to her boyfriend. Her boyfriend could've responded with a cute heart-eye emoji. He could've sent back a funny GIF. He could've sent her a text saying how cute/hot/sexy/beautiful she looks. He could've sent a selfie right back. He could've sent a flirty bitmoji if he wanted to. But no, he went ABOVE AND BEYOND. In fact, he decided to throw himself on the floor and have his co-worker take a picture of him lying there, looking like he fainted, totally struck by his girlfriend's beauty.

HAVE YOU EVER SEEN A BETTER RESPONSE IN YOUR LIFE? Like, just think about all of the possible reactions you could be searching for when you send a selfie to someone. Are any of them better than the receiver literally lying on the floor motionless because they were so captivated by your immense beauty? Yeah didn't think so.

People on Twitter are so incredibly impressed by Alexia's boyfriend's creative response. But what they're most impressed by is that he actually went through the trouble of recruiting a co-worker to take the picture of him.

Let's take a minute to really appreciate the amazing picture:

People are seriously losing it that this guy asked his co-worker for help with this.

There is just one cause for concern with the picture...

Nevertheless, their level of love is something to aspire to.

He just raised the bar for boyfriends around the world.

The whole Twitter community is cheering for them to stay together forever.

That was more than just a text. It was a BLESSING.

I mean, have you ever met someone so extra (in a good way)?

Despite what everyone says, though, Alexia insists they're just "regular schemgular peeps."

OK, but he's, like, really putting other boyfriends to shame.

He's a total drama queen, and we are all here for it.

He might've even put his job on the line to let Alexia know how beautiful she is.

As if they couldn't get any cuter, Alexia also made sure he doesn't get in trouble at work.

PLOT TWIST: They're even going for an impromptu meal out.

I'm hoping the meal is to thank her for making him an overnight Twitter sensation, but knowing this guy, he probably just surprises her with impromptu meals all the time.

If this guy's text isn't modern-day chivalry at its very finest, I don't know what is. I hope this couple's conversation is something we constantly use as our very own relationship goals. This isn't to say that you respond to every picture your bae sends you with a picture of yourself fainting on the floor, but to say you should be enthusiastically happy about what your significant other shares with you. And getting a little creative with your responses doesn't hurt, either.

Life is just waaaaaay too short to miss even one chance to go above and beyond to show your partner just how much you really love them.