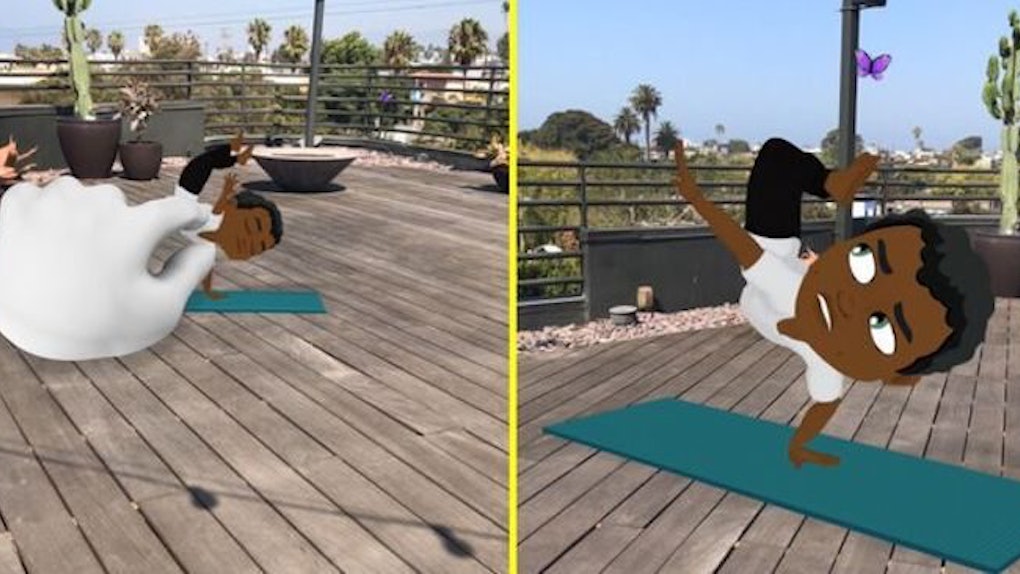 Let's be real: Fun filters aside, most of us probably use Snapchat because of the interactive Bitmojis we can use while posing for selfies or Snapping our friends. World Lenses have made Snap's filters even more entertaining by letting you add puking rainbows into the sky -- and if you love that, you're going to adore bringing your Bitmoji to life using Snapchat's World Lens. Here's how to use 3-D Bitmojis on Snapchat.

The new feature is already out and ready to be enjoyed by iOS and Android users alike. To use 3-D Bitmojis on Snapchat, make sure you visit the app store and update your Snapchat app (if you haven't done so already). Also, make sure you have the Bitmoji app as well and have already created your avatar. Once your app is updated and ready to go, you fire up Snapchat and tap the rear-facing camera to unlock World Lenses in the lens carousel.

The 3-D Bitmojis will appear on the rear-facing lens carousel alongside the regular World Lens options. It's super easy to find and pretty fun to use. You can then point your camera wherever your heart desires and place your Bitmoji on whatever surface you find most entertaining. The, you hit record! You can even make your 3-D Bitmoji larger or smaller, and you can walk them around.

Once you're done recording your entertaining Bitmoji short film, you can send them directly to friends or send them to your story for everyone to see. To be honest, I've already updated my Snapchat app and gave these new Bitmojis a try. I will admit they're a lot of fun. So far, Snapchat offers five different Bitmoji options including a water cooler, yoga, and guitar playing Bitmoji — get ready to spend a large part of your day playing with the virtual you.

Recently, Instagram has been doing any and everything in its power to become the go-to destination for everything social by adding awesome new features, but Snapchat is looking to take their crown back with this new 3-D Bitmoji feature. I guess it was worth the $100 million it cost Snapchat to acquire Bitmoji last year.

Augmented Reality has become a hot commodity in the tech sphere, with Apple announcing they'll incorporate Animojis into iOS during their recent keynote on Sept. 12 in Cupertino, California. The only downside is that Animojis will only be available for Apple customers who spend a small fortune on the iPhone X when it's released later this fall. I guess I won't be using Animojis for a long time... or at least until Apple decides to add the feature to older iPhone models.

For those of us who won't be camping out to purchase the oh so coveted iPhone X, there is always Snapchat and their new 3-D Bitmojis with the help of World Lenses. World Lenses were introduced to the Snapchat app in April 2017 and has most notably brought us the hilarious dancing hot dog lens we all know and love.

A spokesperson for Snapchat tells Elite Daily that over the past two years, lenses have become one of the app's most popular features with more than one in three active daily users using the lenses on a daily basis. It's understandable why Snapchatters love World Lenses so much: They give you the opportunity to transform the room you're in and play fun interactive games.

The best part is that iOS users can incorporate the multi-snap feature to their new 3-D Bitmojis and make funny feature-length films. I told you guys Snapchat isn't playing around -- they want their iron tech thrown back from IG. Let's see if Instagram will top this.