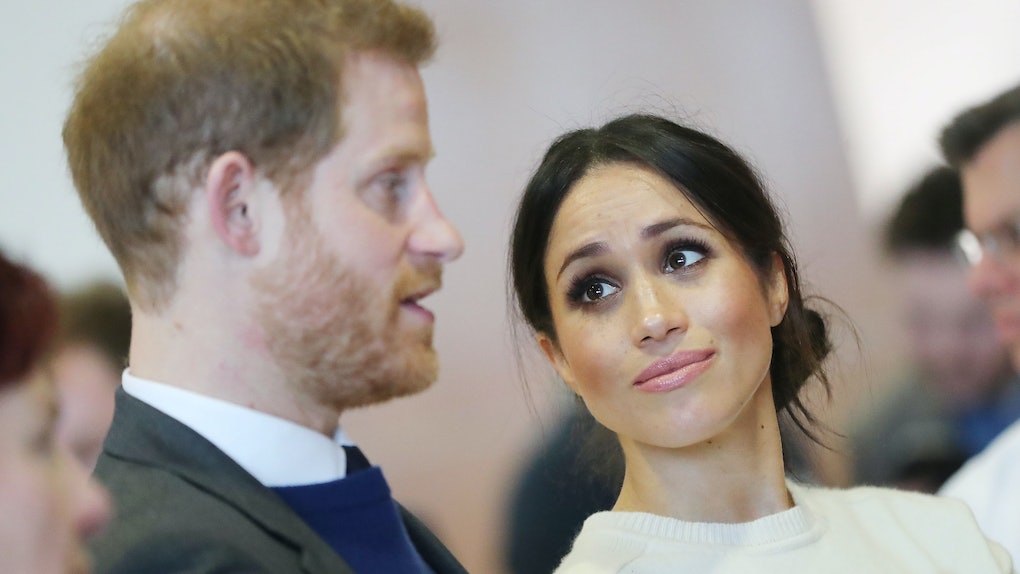 On May 19, 2018, Meghan Markle will turn into an IRL-princess. After she marries her knight in shining armor (Prince Harry, duh), there's a good chance she'll partake in royal celebrations for the rest of her life. I'm pretty jealous, because who wouldn't want to party like a royal? It's safe to say Markle is in for an exciting ride, because celebrations at Kensington Palace sound like a blast. However, partying with the royals wasn't always enjoyable — specifically in the 18th century. In fact, I'll let you in on one detail about royal parties in the 1700s that'll make Markle glad she wasn't married into the family hundreds of years ago. Let's just say royal bashes back then weren't all to enjoyable for women.

When I say "royal bashes," I'm talking about the parties that King George II threw at Kensington Palace when he reigned from 1727 to 1760. King George and his wife, Queen Caroline, used the palace for entertaining more than business — and the parties they threw weren't your typical Friday night get-togethers. Instead, they were gatherings that welcomed wealthy, high-class citizens, and only the "privileged" made it to the King's Drawing Room, which is where the real parties began.

King George II's Drawing Room was basically a party room attached to his bedroom, and I explored it during a recent tour through Kensington Palace. My tour guide explained that only "suitably dressed" members of society made it to the King's Drawing Room during parties at the palace, and visitors were welcomed into the room starting at 10 p.m. Guests inside the Drawing Room played card games, danced the night away, and admired the presence of King George II. It sounds like fun, right? Well, wait until you hear what women went through during those parties.

Women had to go above and beyond in drop-dead gorgeous dresses called "mantuas" that showcased their wealth and social ranking to get into the room. Mantuas were extremely expensive to make, as they were made of fabrics embroidered with silk. They appear to be flat and wide when you look at them straight on, and the width of the mantua represents the wearer's wealth. The mantua I saw at Kensington Palace was 6 feet wide and held 10 pounds of silk, and was probably worn by someone with a lot of money (it would cost more than $2 million if it was sold today). According to National Museums Scotland, some mantuas were nearly two and a half meters wide. Yup. The wearer of a 7-foot wide mantua likely held a high status (and a heavy wallet).

Our tour guide also told us that women couldn't even sit down in a mantua, so they'd often faint in the King's Drawing Room from standing up for too long. Yikes.

Wearing all those pounds of fabric was not even the worst part. Once a woman put on her mantua for a party at the palace, she couldn't take it off — not even to use the restroom. Once a woman was in the King's Drawing Room and in the presence of King George II, she wasn't even allowed to leave. In fact, leaving the room was a sign of disrespect, which means women were stuck there until it was time to go home. So, how did they use the bathroom, then? The answer is, um... uncomfortable.

Our tour guide told us that women who needed to go to the bathroom had to wait inside the Drawing Room for a boy to come to them with a pan. Apparently, he'd go underneath the women's dresses and literally catch their urine as they peed. If women couldn't get the help in time (it was often too crowded), they'd just go to the bathroom on the floor.

As you can see, royal parties in the 18th century weren't as glamorous as you'd imagine. In fact, they sound smelly and uncomfortable — and if I was ever invited to one, I'd probably "lose" my invitation in the mail. Something tells me that Markle would do the same thing.