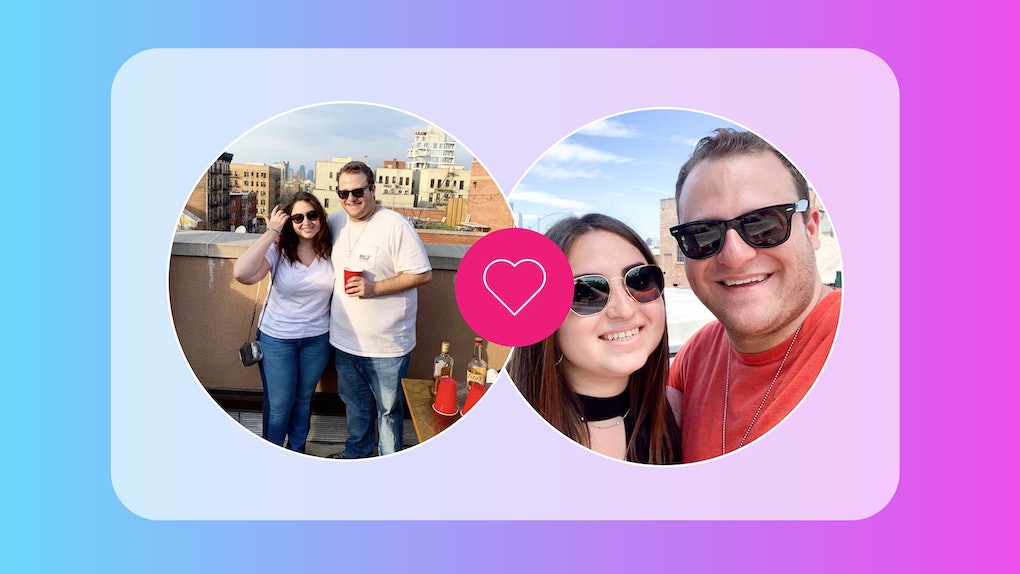 Are you dying to know what a couple's relationship is really like? Elite Daily's new series, ILYSM, celebrates couples who met on dating apps and dives into the inner workings of their relationships. How did they know they were falling for each other? Who sent the first awkward message? What's the one thing they fight about? Are they astrologically compatible, and do they care? By the end of each story, you'll love them both so much.

Lauren Dana, 21, and Zach Ellman, 26, met on JSwipe just under two years ago, back when she was on summer break from Syracuse and he was working as a personal assistant to a celebrity. After a pre-date FaceTime, they met for drinks in New York City and quickly fell for each other. How quickly? Knowing they had something special, they made their relationship official just a week later, before Lauren went back to school.

After nine months of dating long-distance, they now live together in a studio apartment. These days, she works as an editorial assistant at a travel media company and he works as a teacher while pursuing his master's degree in education. Lauren and Zach hope to get engaged soon, and dream of getting a dog together someday.

Zach Ellman: We met on JSwipe.

ZE: A little under two years.

LD: We live together on the Upper West Side and plan on getting engaged soon. We’re dying to get a dog but want to feel more financially secure first (and live in a bigger apartment).

ZE: Our common interests in the communication fields. Lauren has always been a very talented writer, and at the time I was creating content on my website via blog posts, and she was interested in my love of filmmaking and photography.

ZE: I sent the first message. It was, “Hey Lauren! I'm Zach. Nice to meet you! How's your week going so far?”

LD: We texted for a few days both on JSwipe and via text. We ended up FaceTiming before our actual date which, TBH, I thought was a little weird. But after our FaceTime, I was so giddy and over the moon to actually hang out IRL.

ZE: We texted for a day or two and planned our first date. However, the night before, we had a very nice and intimate FaceTime session. It was actually a nice icebreaker before the first date, kind of like a pre-game in a romantic way.

ZE: Our first date was at a bar on the Upper West Side called Bar Thalia. I had always passed by it on my way to work and it seemed like a good place to bring a date for drinks. We talked about each other’s families, our professional aspirations, and what we did that summer. It was really a great first date.

LD: Zach told me he’d meet me “halfway.” Little did I know, “halfway” really meant two blocks from his apartment, and 60 blocks from Penn Station (I was commuting into the city from Long Island at the time — and it took me like an hour with subway time to actually get to the bar). Zach got there before me and met me at the door and I was so, so, so excited to actually see him in person. We ended up going back to his apartment after and I slept over, though, we were both adamant about not having sex on the first date.

ZE: It was after our fourth or fifth date. We were in my apartment and it was right before Lauren was going to head back to school in Syracuse. I knew she was a keeper and wanted to keep the relationship going, so I figured, “Why not make it official and make it Facebook official?”

LD: Zach actually brought it up after like a week of seeing each other, which may seem way too soon to some people, but I’ve always been known to catch feelings fast, and Zach’s the same way. He said he really liked me and said he wanted to continue seeing me and take this further, despite the fact that I was headed back to school. We did long-distance for nine months.

If you're Instagram official, what was your first photo together?

LD: He was so giddy we actually took a selfie right after [we became official] to put on social media!

ZE: At the time we started dating, I was working in New Jersey as a personal assistant for a high-profile celebrity. On what was supposed to be our second or third date, I got a last-minute call from my boss that I needed to stay late. I texted Lauren, who was coming [into Manhattan] from Long Island and already waiting for me. I ended up working an extra three hours and rushed back to the city hoping she wouldn’t leave, as I really was looking forward to our next date. Ultimately, Lauren was so loving and caring that she not only waited for me until I got back to the city, but she was at the parking garage near my apartment with dinner in hand. We had our first meal at my apartment together and that’s when I knew she was a keeper.

LD: When Zach came up to visit me in Syracuse over Labor Day Weekend. We had the absolute best time together and went apple picking, walked by the lake, I introduced him to school friends, and we just basked in each other’s company. I’ve never felt like that before.

LD: Me, but I’m confident that Zach felt it first.

ZE: I plead the fifth.

LD: Our first big fight was in December of 2017 (after four months of dating). Zach went to his brother’s graduation and I did not hear from him at all for a full 21 hours. I was really upset and anxious, because I’ve made it clear that one of the most important things to me in a relationship was constant communication. So, when he didn’t answer my texts and was posting on Facebook, I got pissed.

What's your favorite underrated thing about each other?

LD: How good Zach smells when he’s hanging out in bed (after he showers, of course)!

ZE: Lauren’s laugh from getting tickled is very cute. She squeals like a baby and squirms. It’s quite humorous.

ZE: The last thing I texted about was dinner. I am a very hungry man.

LD: Zach’s a teacher, so it’s a little tricky but we make it work. He texts me on his lunch and after work, and I like to send him sweet little texts throughout the day, too.

ZE: Being a teacher, it’s tough to text when you have to watch 21 fourth graders. I try to text Lauren on my lunch breaks and when I’m out of work for the day. We’re usually home together by 6 or 7 p.m.

Lauren, you’re a Leo; Zach, you’re a Capricorn. Do you know if you are astrologically compatible? Do you care?

LD: I don’t believe we are, according to an astrologist that I interviewed for a story. Oh, well!

ZE: I don’t know if we are astrologically compatible and I could care less.

ZE: We love to watch Law & Order: SVU, Big Mouth, The Bachelor, and The Bachelorette, The West Wing, and Stranger Things together.

What has been your favorite date together?

LD: When we went to Bryant Park Winter Village and bought each other little gifts, and when Zach met my parents when they took us to dinner — so much happiness to be shared!

ZE: For Valentine’s Day this year, I made a lobster dinner for Lauren in our apartment with help from my mom. I made appetizers, had different types of wines and dipping sauces, and even played romantic music in the background as she walked in. It was a great time and well worth the extra preparations.

What's one word to describe your sex life?

ZE: Lauren and I agree that our biggest strength is our communication. We agree that constant and efficient communication is vital to a strong relationship. We also have a “golden rule” that we never walk away from a conversation angry. We always hash out our problems in the moment and make sure to solve them accordingly.

LD: We both really pride ourselves on our communication skills and that we always tell each other how we’re feeling, what we need from each other, etc. We also never, ever go to bed angry or leave each other without resolving a situation.

LD: To never compare ourselves to other people, and that money can’t buy happiness. It’s all about being grateful, mindful, and living in the moment. And, health and happiness is the most important.

ZE: I was dating Lauren when I lost my cousin to cancer. She had lived with me growing up and was practically a sister to me. She was all about gratefulness and how anything going wrong in life was meaningless and that we should always be grateful for what we have, no matter how much the cost. Since her passing, Lauren and I have been through a lot (i.e. unemployment, family separations, etc.) and we’ve always come out of these situations stronger than ever being grateful that we have each other to help get us through it.

ZE: Be open-minded. Swiping left and right based on looks isn’t the way to go about dating someone. If you’re serious about dating, actually take the time to look at someone’s profile and interests, and then actually hold a conversation with them. You’ll be surprised what you may or may not find.

LD: Swipe with an open mind! You never know what may happen. :)