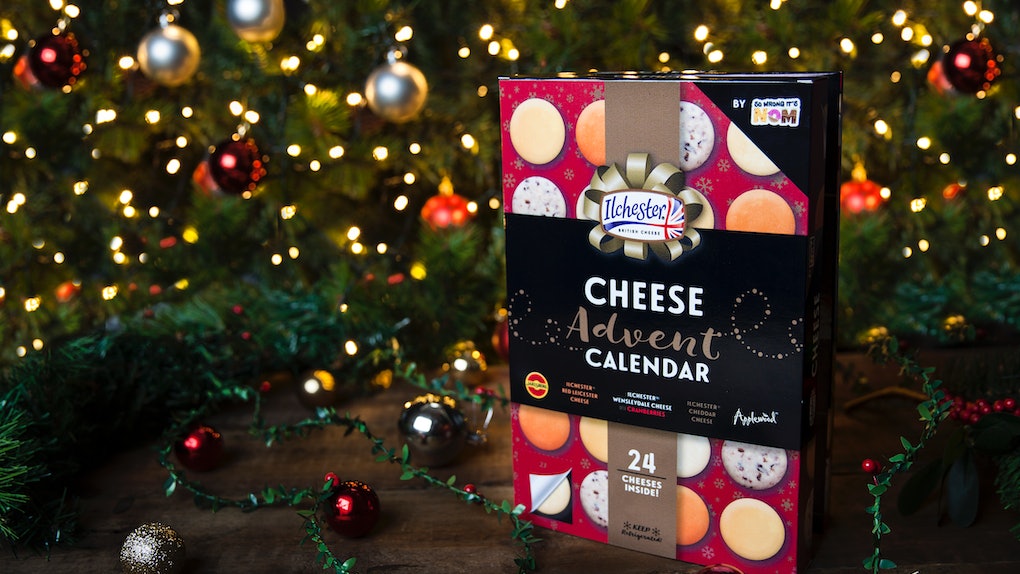 So Wrong It's Nom

Don't get me wrong: I love chocolate, candy canes, gingerbread men, and all the sweet goodies that come along with the Christmas season. But in recent years, I've been leaning more towards the red wine than the hot cocoa. I mean, let's face it: There's nothing like a holiday party without a big glass of vino and platter of gourmet cheeses. Thankfully, my fellow gouda lovers are in luck this holiday season — because the Cheese Advent Calendar by So Wrong It's Nom is available in the United States. Yes, my friends: An advent calendar filled to the brim with cheese is here, and it'll help you brie merry all December long.

To be completely honest, I can't contain my excitement. The simple thought of snacking on individually wrapped cheeses for 24 days straight is getting me hungry — and I'd like to personally thank the woman who invented the calendar. According to a press release, that woman is Annem Hobson, a British food blogger who created So Wrong It’s Nom. Hobson's Cheese Advent Calendar was originally released in the United Kingdom for the 2017 holiday season — and people obviously loved it. This year, it's available in the United States... so get into the holiday (er, I mean, cheese) spirit.

To make her Cheese Advent Calendar possible, Hobson pitched the idea to Norseland Innovative Cheese Specialists. The cheese company — which represents brands like Applewood, Mexicana, Ilchester, and Jarlsberg — ended up helping Hobson produce the holiday calendar. The final product is filled with a total of 24 cheeses, which include Jarlsberg, Applewood, Ilchester Mature Cheddar, Ilchester Red Leicester Cheese, and Ilchester Wensleydale with cranberries. For more information on the cheese types, you can read all of the details here. (FYI, they all sound freaking delicious.)

Hobson talked about the mouth-watering Cheese Advent Calendar in a press release, and said,

Thousands of Americans have showed their continued support for my #CheeseNotChoc campaign. Over the past year, I’ve had countless Tweets and emails asking me to try my best to get the calendar to the US. I’m absolutely thrilled we’ve managed to make this dream come true. With every single cheesy invention I make, I want to bring the fans along the journey. Without them, none of this would be possible.

It seems like she's pretty excited about bringing the Cheese Advent Calendar to the United States (but definitely not as excited as I am).

Now that you know what kind of cheeses are included in the advent calendar, you're probably wondering where you can get it. According to a press release, the delicious product will become available at 247 Target stores nationwide in early November. The best part is that it'll only be $20, per So Wrong It's Nom. That means you won't be putting a dent into your wallet right before the holidays come.

If you're looking for wine to drink with your cheese throughout December, go ahead and check out this Wine Lovers' Advent Calendar. It'll give you the perfect excuse to wash down your cheddar with a small glass of vino (and keep track of the days before Christmas, of course).