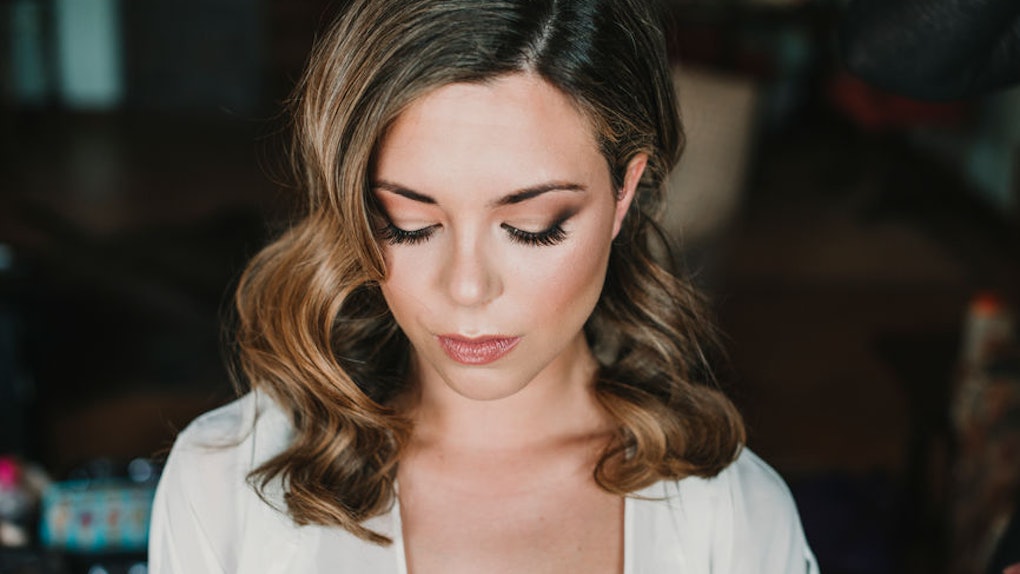 It's no secret that weddings can be seriously expensive. Whether the couple is paying for the big day on their own or their families are helping out, a budget is usually set and agreed upon. It's normal to have to cut corners when it comes to certain expenses, but when you're asking a professional for a service, no one should expect anything free of charge. That's why when I read how this bride asked an estranged friend to do her wedding makeup for free, I was pretty shook.

As Brides reported, the original messages from said bride were posted to a thread on Imgur, and later on Reddit. The thread shows screenshots between the bride and the former friend, seemingly named Jessie. At first, the bride seems kind and genuine, explaining that she's having a small wedding on a limited budget and asking Jessie if she would do her makeup for free. But unfortunately, the bride eventually got pretty upset at her old friend (whom she hadn't spoken to for a decade!!!) for not agreeing to her terms, which were: to travel six hours total, twice (once for the trial and once for the actual wedding), and to not get paid to do a service of which she is a trained professional.

Obviously, the entire conversation is a bit hard to read, as Jessie does her best to be polite, but the bride just isn't taking the hint. She even tells the bride that "it might be easier for you to use someone close to you," as she's a three-hour drive from where the bride lives. Later, she says she might be able to lower her normal rate of 75 euros per hour, but she would still need travel expenses covered. At that point, the bride offered a travel fee of 10 euros but said it wasn't really necessary because she was already inviting Jessie to the wedding.

"I don’t feel like you’re being fair," the bride wrote, per the post. "I invited you to my wedding which is only small and I’ve said you could use the pictures you take for a portfolio so I’d be doing you a favor, too. Can you meet me halfway here?" Yikes.

At that point, as hard as it might have been, Jessie still remained calm and pointed out the irony of the conversation. "We haven’t spoken for 10 years and the first time we do you’re texting me to ask me to do your MU for your wedding for free," she texted the bride. The makeup artist even offered to send the bride some tutorial videos so she could do her own makeup for the big day! She was super polite, all things considered, and ended by giving the bride best wishes. "I hope you have an amazing wedding and a beautiful marriage," she messaged. And the bride's response? “F*ck you. Selfish b*tch!”

It was obviously a messy situation, and Reddit users didn't hold back in their criticism of the bride. Sure, weddings can be expensive and stressful, but that doesn't mean it's OK to take advantage of someone's professional skills. And it's really never OK to call someone a "selfish b*tch," especially when they've been kind to you. As Taylor Swift would say, you need to calm down.

More like this
Zac Clark & Tayshia Adams Are Wedding Planning & I’m So Pumped
By Lydia Wang
When Are Ariana Grande & Dalton Gomez Getting Married? Here's The Reported Tea
By Corinne Sullivan
Kim Kardashian Asked Addison Rae If She's Hooking Up With Kourtney Kardashian
By Joyann Jeffrey
Stay up to date