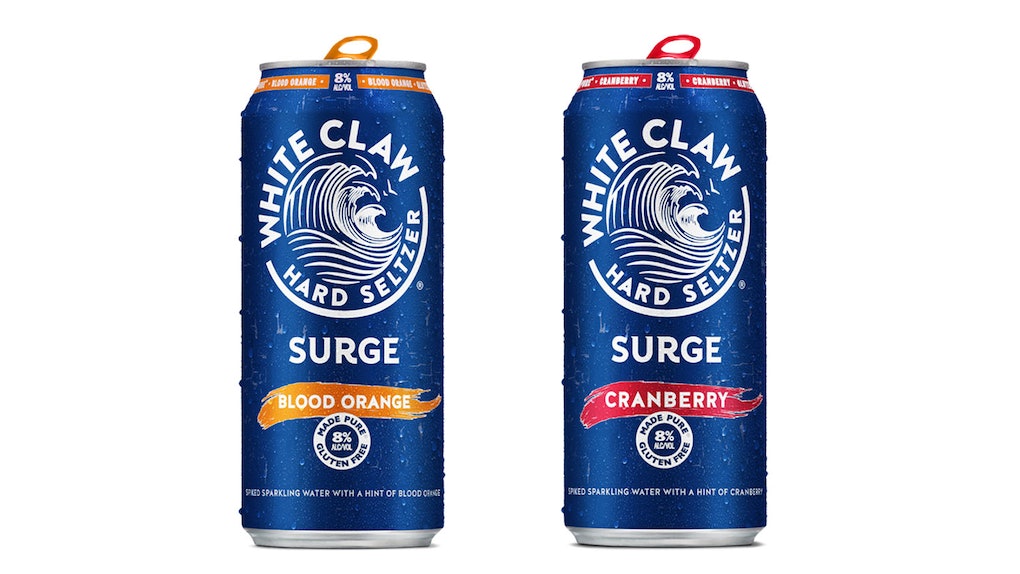 While hard seltzers might have originally gained popularity as an extremely drinkable, low-ABV option, White Claw is bucking the trend with the release of a slightly boozier spiked seltzer. If you're at least 21 years old, you might be wondering what White Claw Surge 8% hard seltzer flavors you can expect when they hit shelves.

In contrast to White Claw's standard hard seltzer, which features 5% alcohol and 100 calories in each 12-ounce can, White Claw's new Surge line, which was announced on April 13, is upping the ante on numerous fronts. While they're still crafted using the company's signature recipe of seltzer water, a gluten-free alcohol base, and a hint of fruit flavor, the 16-ounce cans boast an 8% ABV as well as 220 calories. You won't be force to make too many decisions in the flavor category, though, since White Claw Surge only comes in two options at launch: Blood Orange and Cranberry.

Unlike your typical White Claw, you'll only be able to purchase the Blood Orange and Cranberry Surge cans individually and not as a pack. Each 16-ounce can costs $2.99, per CNN, which makes it a little bit more expensive than a typical variety pack, but not by much.

Taste-wise, it sounds like you can expect the same flavors you generally can expect from White Claw, expect this time with the sweet and tangy notes of blood orange and cranberry accentuated by a "stronger wave of refreshment," per White Claw's product description.

Elite Daily reached out to White Claw for more information on the rollout of new sip but did not hear back at the time of publication. As it arrives in stores during a mid-April rollout, you'll likely be able to find it at most retailers nationwide as well as online alcohol delivery services like Drizly or Instacart.

White Claw's decision to release a slightly boozier Surge line comes shortly after the launch of Truly Extra Hard Seltzer, which also clocks in at 8% alcohol, in March 2021. Only time will tell whether White Claw's decision to join the fray will make the hard seltzer category well, even harder, but it's another option for fans who want their summer sips to pack a little bit more of a punch.

If you're still on the fence about switching to a White Claw with a 3% higher ABV, the company also added to its original 12-ounce, 5% ABV hard seltzer lineup with three new flavors. Now, you can purchase Strawberry, Pineapple, and Blackberry White Claws as part of a variety pack with the fan-favorite Mango White Claw flavor.

When picking up your Claws, remember to follow the latest CDC guidance on masking and social distancing. Whether you choose to sample one of the boozier Surge cans or give the new signature White Claw flavors a try, you can rest assured your patio season is about to become a lot more lit (and delicious).

More like this
These Truly Punch Hard Seltzer Flavors Will Have You Nostalgic AF
By Daffany Chan
These Red, White, & Blue Team USA Oreos & Chips Ahoy! Cookies Are So Colorful
By Daffany Chan
Here's How To Find Asian-Owned Restaurants & Businesses To Support AAPI Communities
By Lara Walsh
Stay up to date