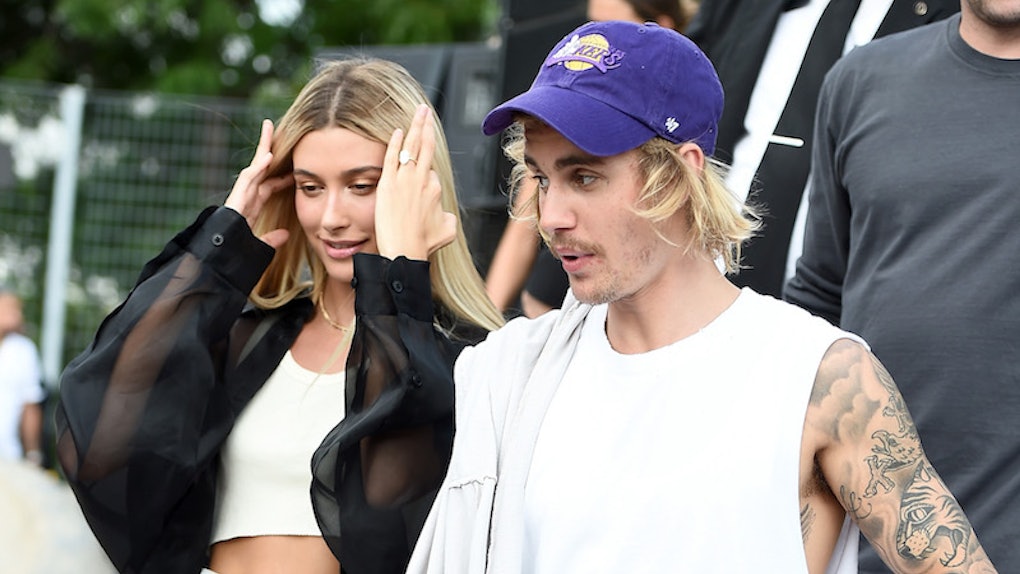 From the beginning, it's fair to say Bieber and Baldwin's relationship has always been intense. They seemed to fall fast and hard for one another and spent the first few weeks of their public relationship aggressively making out on New York City streets, crying in public, and posting lovey-dovey pictures and captions about each other on Instagram. Then, they famously jumped into a courthouse in September 2018 where they quickly and quietly officially tied the knot.

Prior to the official marriage news, Bieber was spotted carrying a book titled The Meaning of Marriage: Facing The Complexities of Commitment with the Wisdom of God. He told paparazzi, "This!... You got good days and you got bad days. It's not real if you don't have any bad days."

Well, according to Bieber's videos, marriage is mostly about your wife first ignoring you and then attacking you with kisses. Bieber started filming himself and Baldwin on a plane, explaining to the camera, "Marriage... she doesn't even pay attention to me." He then pans the camera over to Baldwin who is hiding her face behind her coat. Just before the first video ends, you can hear her about to yell, "STOP!" In the second video, he repeats the sentiment, "Married life. She doesn't even love me no more." This time, it prompts Baldwin to jump all over him and give him tons of smooches.

My initial reaction is a mix between, "I don't get it," and, "What is really going on here?" But, you guys tell me.

However, these two aren't trying to hide that they haven't got it all figured out. As a part of a joint interview with Vogue magazine, both Baldwin and Bieber admitted it's fair to say he's the more emotional person in the relationship and Baldwin is more practical. She also told Vogue that the first few weeks of marriage were "lonely" for her, and that in marrying the world's beloved Bieber she suddenly felt like she had a lot of enemies. "I prayed to feel peace about the decision, and that’s where I landed,” she said. “I love him very much. I have loved him for a long time.”

She later added, "We’re really young, and that’s a scary aspect. We’re going to change a lot. But we’re committed to growing together and supporting each other in those changes... At the end of the day, too, he’s my best friend. I never get sick of him.”

That much is clear based on the PDA videos. All together now: Awww! (???)