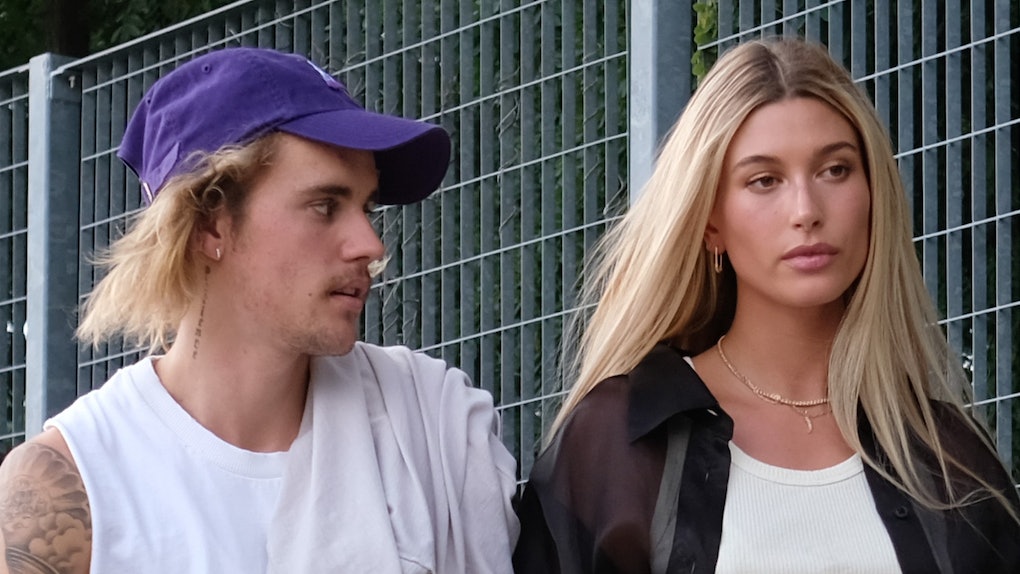 Justin Bieber and Hailey Baldwin are in love. And if their speedy courtship and subsequent marriage didn’t prove that to you, then maybe Bieber’s Instagram will. The Biebs has been sharing photo after photo of his wife and it’s prompting quite a reaction from pretty much everyone. Fans are totally in love with the idea of Bieber being Instagram-obsessed with Baldwin. And Baldwin herself is being super cute about her hubby constantly sharing photos of her on social media. Hailey Baldwin's reaction to Justin Bieber posting photos of her is actually beyond adorable.

It started on March 6 with Bieber sharing a paparazzi photo of Baldwin wearing a tuxedo from House of Drew, which just happens to be Bieber’s new clothing line. In the photo, Baldwin can be seen walking with her hand in her pocket and carrying a black bag on her shoulder. The outfit, overall, is pretty casual and she looks great, as always.

“You wear @drewhouse so well,” Bieber captioned the photo, obviously gushing over his wife’s support of his new clothing venture.

The next photo Bieber shared was one of Baldwin sporting a pink polka dot crop top with a pair of amazing red glasses. It’s another paparazzi shot, but it’s a great photo nonetheless. The last two photos Bieber posted on Instagram were paparazzi shots of Baldwin wearing a black sweatshirt and gray pants. She looks rather morose in the photos, but Bieber obviously liked them enough to share.

As you can see, Bieber has been displaying his love for Baldwin all over social media and Baldwin definitely had a little something to say about it! On one of the photos, Baldwin replied with the emoji of a monkey covering its eyes. So, that probably means she’s just a little bit shy about all the love and attention Bieber is showering on her. Too cute!

Their adorable interactions on social media shouldn’t come as a surprise to anyone. They’ve been pretty open about how much they care for each other, even if fans don’t always see what’s going on beneath the surface. In a February 2019 interview with Vogue, Bieber actually opened up quite a bit about why Baldwin is the one for him.

"Hailey's very logical and structured, which I need," he said. "I've always wanted security—with my dad being gone sometimes when I was a kid, with being on the road. With the lifestyle I live, everything is so uncertain. I need one thing that's certain. And that...is my baby boo."

Just based on Bieber’s words alone, it sounds like Baldwin really provides him with a sense of security and permanence. And that makes sense when you consider that Bieber didn’t have a typical upbringing thanks to his fame and massive success.

As for Baldwin’s take on the relationship, she has a very level-head about the whole thing.

"It's just that I'm fighting to do this the right way, to build a healthy relationship," she told Vogue. "I want people to know that. We're coming from a really genuine place. But we're two young people who are learning as we go."

All in all, it certainly sounds like Bieber and Baldwin are in it for the long haul. And it’s really cute that they have these kinds of silly interactions on social media.