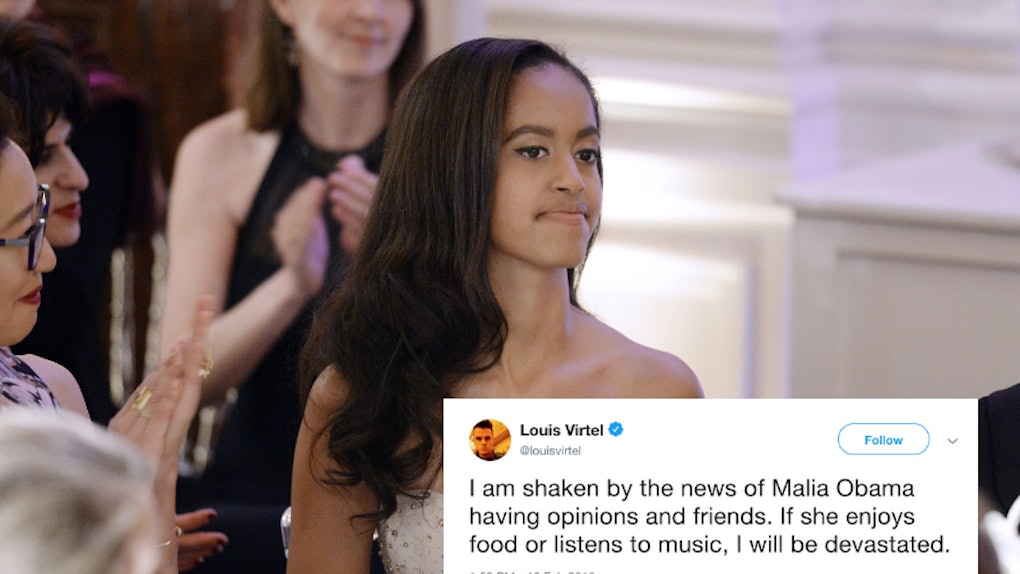 The Twitterverse is coming to Malia Obama's defense after reports surfaced that she was photographed drinking a bottle of wine over the weekend in Florida. The criticism against Obama, who is just a few months shy of her 21st birthday, led former first daughters Chelsea Clinton and Jenna Bush Hager to speak up in solidarity and urge tabloids to give the Harvard student the privacy she deserves as a private citizen. Now, the internet is sharing their thoughts on the situation, and these tweets defending Malia Obama for drinking rosé overwhelmingly call out the hypocrisy of judging her for the deed.

On Sunday, Feb. 17 The Daily Mail published a story with the headline "Rosé all day: Under-age Malia Obama is spotted sipping on an $80 bottle of wine with three friends at Miami Beach pool party" over the weekend, following it up the next day with a story claiming the college student had a "secret" Facebook account where she had allegedly once shared anti-Trump sentiments. A 20-year-old college student drinks wine with her girl friends and has some political opinions? Hold on, let me get my shocked face on.

While the former first daughter isn't a public official and lives her life out of the public sphere, she's been a subject of media reports probing her personal life for gossip even after her father left the White House. For example, The Daily Mail has previously shared salacious paparazzi photos of her kissing "a mystery man" and dancing during the Killers' set at Lollapalooza, which is something that I think many 20-year-olds can relate to.

In response, the internet hit back with the same message: Leave Malia alone.

Former first daughters Chelsea Clinton and Jenna Hager Bush, who were both the target of tabloid interest while their fathers were serving as president, also took to the social media platform to comment.

"Malia Obama is a private citizen. No part of her life should be anyone's clickbait."

"Hesitant to add anything to such a nothing-story, but agree with @ChelseaClinton whole heartedly. Please don’t click on silly stories and let’s give Malia privacy."

Others were quick to point out the double standard of the right critiquing Obama for her behavior, while many were quick to give Supreme Court Justice Brett Kavanaugh a pass for his teenage drinking in the 1980s. Kavanaugh's behavior became a talking point during his confirmation hearings after Dr. Christine Blasey Ford alleged that a drunken Kavanaugh had sexually assaulted her at a high school party. Kavanaugh denied Blasey Ford's allegations, and representatives of the then-judge did not respond to Elite Daily's request for comment at the time. Kavanaugh readily admitted to the drinking, however, saying, "Yes, we drank beer. I liked beer. I still like beer," per the Associated Press. Following his confirmation, some of his supporters celebrated with beer on social media, per The Hill, although Kavanaugh himself did not appear to participate or comment on the celebrations.

While underage drinking is illegal in the United States, photographing her and reporting on it was an undeniable violation of privacy, especially considering that Obama is a private citizen, 20 years old, and entitled to the same kind of privacy and room to be a college kid as every other person her age (and yes, that includes room to mess up). Former Obama White House photographer Pete Souza summed up the situation with one tweet.

Hopefully the backlash will spur everyone to spend less time reporting on politicians' and former first daughters' personal lives, and more time focusing on the important political issues at hand.