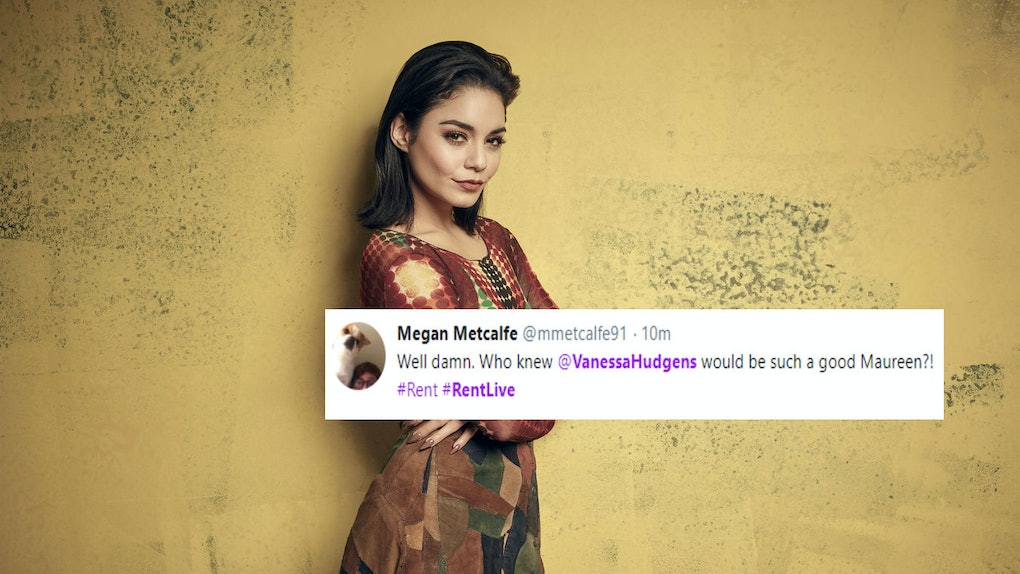 These Tweets About Vanessa Hudgens In 'Rent: Live' Highlight Her Star Power

She may have belted "Take Me or Leave Me" as Maureen Johnson during the semi-live broadcast of Rent: Live, but Vanessa Hudgens definitely isn't being left behind by viewers of the Jan. 27 production. No stranger to filmed or live TV musicals, the former High School Musical star quickly became the highlight of the show, and these tweets about Vanessa Hudgens in Rent: Live prove that she's definitely graduated from East High Wildcat to the rank of a bona fide musical star.

Playing bisexual artist Maureen Johnson, Hudgens is familiar with both Rent and performing in a live TV musical. In 2010, she portrayed AIDS-positive dancer Mimi in Neil Patrick Harris' Hollywood Bowl production of Rent, but reviews hinted that critics believed she had yet to shake off her Disney Channel influence. Then with plenty of non-Disney productions under her belt, Hudgens appeared as leading Pink Lady Rizzo in 2016's Grease: Live a day after her father passed away from cancer. Grease: Live is still considered one of the stronger live TV musicals, but Hudgens' powerful performance of "There Are Worse Things I Could Do" was deemed a production highlight.

In case anyone was still doubting Hudgens' musical expertise exceeding the jam that was "Sneakernight," all they had to do was watch Hudgens bring Maureen to life during the pre-recorded broadcast of Rent: Live. Due to the sudden ankle injury of her co-star Brennin Hunt, FOX resorted to airing dress rehearsal footage of the show until its live finale number featuring Hunt and Rent's original Broadway cast. Because of this unexpected mishap, some cast members' performances were noticeably restrained in the rehearsal clips, but Hudgens was one of the few stars to fully commit to her role's demands.

While she did what she could in a cow-themed costume in "Over the Moon," Hudgens truly caught viewers' attention during Act Two's "Take Me or Leave Me," which Maureen sings with her girlfriend Joanne (Kiersey Clemons in Rent: Live) about the problems and insecurities in their relationship. As with any performers who follow an original cast, Hudgens delivering a song as memorable as Idina Menzel's Broadway version seemed unlikely, but Hudgens' vocals definitely came close. For fans who first knew her as the quiet, tentative Gabriella Montez of High School Musical, her transformation into a total powerhouse as Maureen also quickly became a Rent: Live highlight.

While Rent: Live didn't turn to its live feed until about 15 minutes before the show's end, the cast performed songs alongside FOX's rehearsal footage for its live audience. No surprise, but based on videos audience members have uploaded to Twitter, Hudgens killed her part in person, too.

Even better, Hudgens snagged the approval of the original Maureen, aka Menzel. In the Rent: Live studio with her fellow Broadway veterans for a special finale appearance, Menzel tweeted, "So proud of you, Vanessa!"

So, Menzel's appreciation is definitely a Broadway blessing for Hudgens to star in every live TV musical from now on, right?

Thanks for going over the moon and getting your head in the game for your performance, Hudgens!