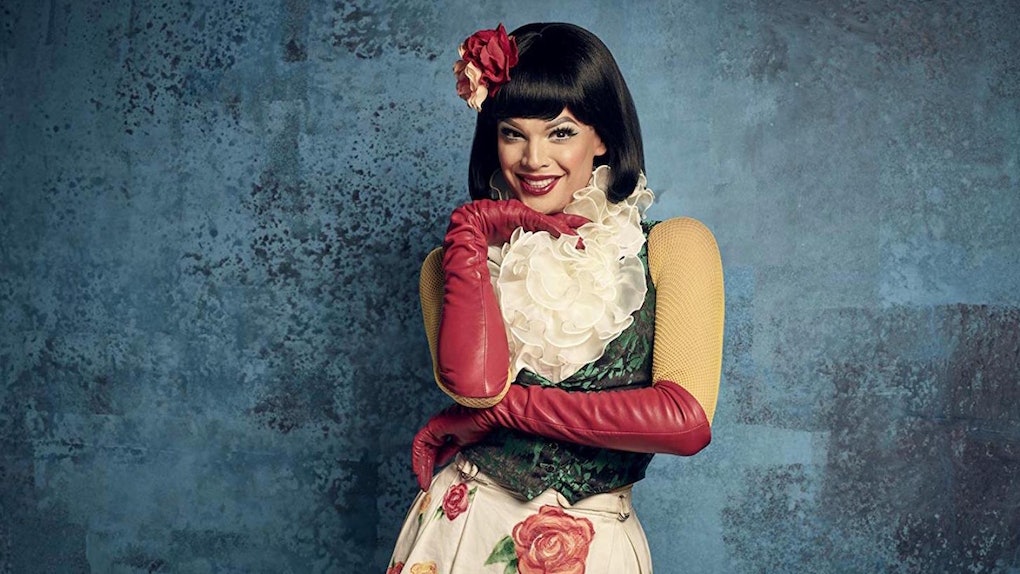 These Tweets About Valentina As Angel In 'Rent: Live' All Agree She Slayed It

Fox's newly staged version of Rent premiered on Sunday night, and the star-studded cast of Rent: Live totally brought their iconic characters to life. With stars like Vanessa Hudgens, Mario, Jordan Fisher, and Tinashe, fans were ready for Rent: Live to be an incredible and energetic new staging of the Broadway smash, but one new cast member stood out among the rest for every fan of RuPaul's Drag Race. Valentina, a verified All Star on RuPaul's Drag Race, took to the stage as Angel in Rent: Live and gave a whole new spin on the beloved role. These tweets about Valentina as Angel in Rent: Live prove that viewers are obsessed.

Valentina is best known for her memorable run on Season 9 of RuPaul's Drag Race and on the currently airing Season 4 of RuPaul's Drag Race All Stars. Ironically, Valentina's most infamous moment on Drag Race was her covering her mouth with a mask during her elimination lip sync to try to hide the fact that she did not know the words to the song. But there was no mask covering her mouth on Rent: Live. Valentina shone in the role of Angel, the sweet and generous young drag queen percussionist who is afflicted with AIDS. Viewers took to Twitter to share their love for Valentina's portrayal of the character. Check out some of the best tweets below:

Most of Angel's songs in Rent are duets or ensemble numbers with her love interest Tom Collins, which meant that Valentina's chemistry with her co-star Brandon Victor Dixon had to really fly off the screen in Rent: Live. And the pair totally sold that they were broke, bohemian lovers. Of course, Brandon Victor Dixon is a Tony-nominated Broadway veteran, and he totally stole the show as Judas in last year's Jesus Christ Superstar Live in Concert, so he was the ideal scene partner for relative newcomer Valentina.

Valentina really got to show off her singing chops in Angel's big solo number, "Today 4 U," though. She also had standout parts in Angel's duet with Tom, "I'll Cover You," and the subway choreo number "Santa Fe." The part of Angel was portrayed by Wilson Jermaine Heredia in Rent's original Broadway cast when the musical first debuted in 1996, and Heredia reprised the role in the 2005 movie version of the musical.

Along with Rent: Live, Valentina is also currently starring in the fourth season of RuPaul's Drag Race All Stars, a highly competitive version of RuPaul's Drag Race that brings back some of the most memorable queens in the hit reality franchise to compete for a place in the hall of fame. On Friday night's episode of All Stars, Valentina was eliminated from the competition, three days ahead of Rent: Live. But it is clear that despite her fresh elimination, Valentina was ready to prove just how much of a superstar she is on the stage as Angel in Fox's Rent: Live.