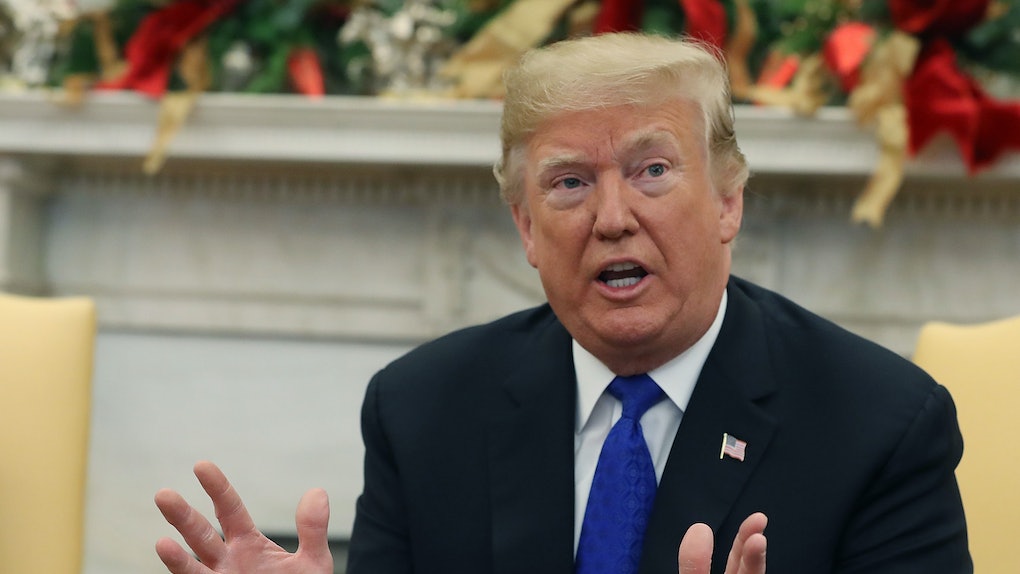 The trees are decorated, the lights are up, the eggnog is spiked, and the holiday cheer is upon us — unless you're a journalist who thought you'd score an invite to the White House this Christmas. For decades the president has hosted a Christmas party for members of the media, but this year President Donald Trump is apparently foregoing that tradition. Fox News reported on Dec. 13 that Donald Trump canceled the White House Christmas party for the press as his war on the "Fake News Media" wages on — and it's a total Grinch move.

The White House, nor the president, has officially canceled the party, but told Fox News in an exclusive statement that the media Christmas festivities are a no go this year. In a statement shared with Elite Daily, a White House spokesperson says that the holiday party was "not put on the holiday schedule this year," and that members of the press who wanted to see the holiday decorations were accommodated via an open house tour.

In the past, the annual party was a highly-anticipated event and a hot ticket in Washington, D.C. Members of the press as well as media executives would flock to the White House to rub shoulders and break bread with the first family and top White House officials, according to Fox News. So, canceling the party isn't exactly in the spirit of the holiday — and Twitter was very quick to point out the "Grinch-ness" of it all.

While true it might be a Grinch move to cancel the Christmas party, it's not at all surprising given Trump's contentious relationship with the media.

While the Trumps did host the media Christmas party last year, Trump and Melania Trump only made a brief appearance and didn't even stay for the traditional picture taking with members of the press, according to Fox News. The president has also not made an appearance at any of the White House Correspondents' dinners that celebrate the press.

But Trump's inability to show up at press-centric events is nothing compared to his very public Twitter feuds against the "Fake News Media." According to the Trump Twitter Archive, the president has tweeted about "fake news" 343 times while he's been in office, and has frequently picked feuds with news outlets and reporters he thinks give him unfavorable coverage. In November, Trump revoked CNN's Jim Acosta's press pass following a press conference in the White House's East Room. During an exchange with the president, a White House intern repeatedly tried to take the microphone away from Acosta, which he refused to give up. Hours after the conference, Acosta tweeted that he'd been denied entrance to the White House and was asked to hand in his "hard pass," which allows easy access to the White House. The White House justified the revocation with a video that appeared to show him being forceful with the White House staffer who attempted to take the mic, and White House Press Secretary Sarah Huckabee Sanders accused him in a tweet of "placing his hands on a young woman." The video, which appeared to be doctored, caused an outcry, and a judge later ruled in favor of a suit brought by CNN and ordered the White House to reinstate Acosta's pass on Nov. 19. The White House did not respond to Elite Daily's request for comment on whether the video had been edited.

Given Trump's contentious relationship with the media, it'd be more surprising if he decided to go ahead and have the Christmas party. Well, at least that's one less party those reporters have to pretend to enjoy.