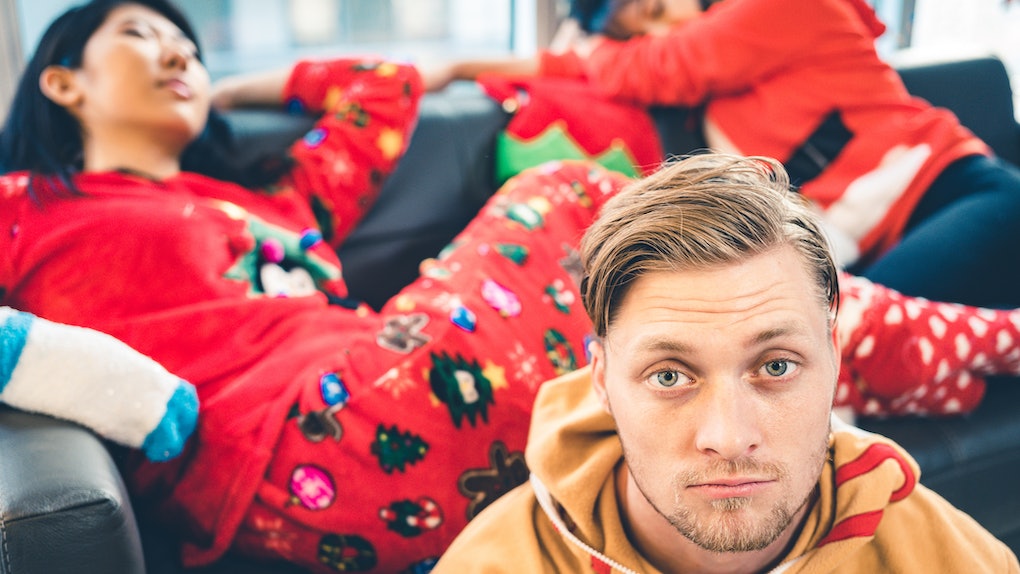 Those feeling the slump between Christmas and New Year's are not alone. Many people are complaining about the agonizing week between the two holidays, labeling it as "Betwixtmas," "Crimbo Limbo," or "The Merrineum." If you're annoyed with the pause in festivities and have no idea what you're supposed to do with yourself, these tweets about the week between Christmas and New Year's will feel so relatable.

TBH, Dec. 26 through Dec. 31 can feel like a total state of limbo, and while there are some Twitters users who apparently enjoy the strange time, the bulk of Twitter users have come to the same conclusion: It's boring; it's a let-down; and it's a big interruption in your holiday vibes. Many people even have a hard time even remembering what day it is during the last week of December. After all the holiday build-up, a sudden stop in the festivities is a little jarring and can mess with your head. And if you're going to work during "Betwixtmas," you're probably wondering if you're getting up at the right time or just feeling unable to accomplish tasks after all of those large dinners and celebrations.

Thanks to these tweets, you can spend some of the "Crimbo Limbo" commiserating with everyone in our blur of boredom and confusion.

You may just feel like sitting around and eating endless leftovers and candy while waiting for the new year:

Who ever heard of cooking a real meal when the days are totally skewed?

Those who have to work are out-of-whack, bummed beyond compare, or making sure they're working without really working:

There are the countless names and revelations about this strange void between Christmas and New Year's. From "Crimbo Limbo" to "No Man's Land," it all amounts to the same idea: No one knows how to act or what to do with themselves.

Some of us really don't know what day it is anymore:

Whatever you want to call it, there's no doubt most of us are feeling a little off before New Year's Eve, but at least you're not alone.