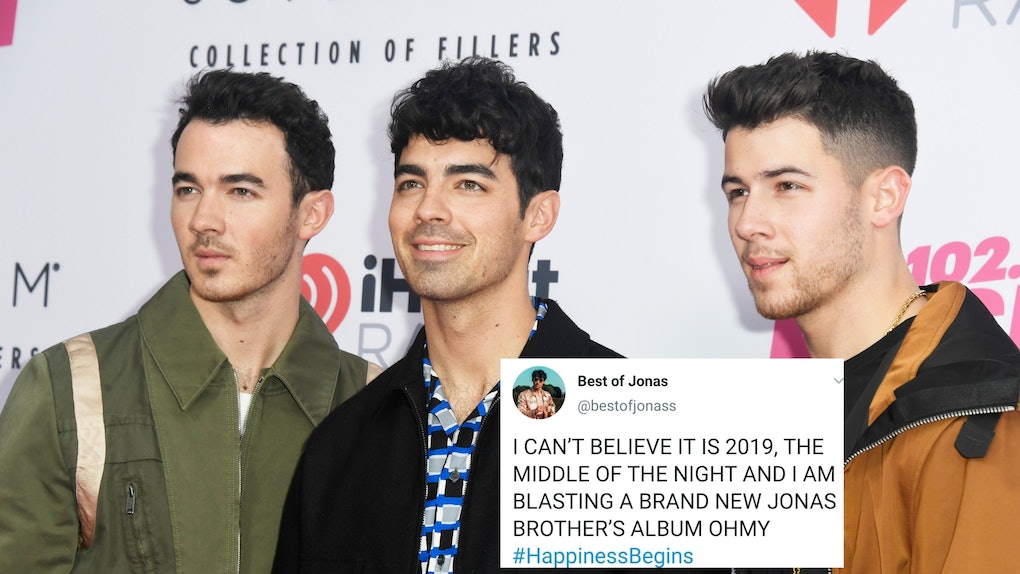 Are you happy yet? Y'all better be! Because it's finally June 7 and the first new Jonas Brothers album in a decade just dropped. Sibs Nick, Joe, and Kevin Jonas have released Happiness Begins, and it's everything I hoped it would be and so much more. Which means I'm going to be doing nothing for the entire weekend except listening to this baby on repeat. It's that good. But don't take my word for it. Let these tweets about The Jonas Brothers' Happiness Begins convince you that the album 10 years in the making is better than anything that came before it.

But first, some background. The former Disney Channel stars surprised fans on April 22 by announcing on Twitter that their fifth studio album was scheduled to drop on June 7. A month later on May 22, the boys hit up Instagram to reveal the Happiness Begins tracklist, which kicks off with their Billboard chart-topping single "Sucker" and its Miami Vice-inspired follow-up "Cool."

That entire tracklist kinda reads like a love letter to an ex-girlfriend, doesn't it? Meanwhile, Nick told Billboard back on April 25 that the song "Hesitate" actually is a love letter that Joe wrote to his wife Sophie Turner. And, like, awww! He also revealed that "I Believe" is his favorite tune on the album, and after hearing it, I can totally see why. Like, it's most definitely inspired by his love for Priyanka Chopra.

Of course, JoBro fans are freaking out about the entire album on Twitter, which is to be expected since we've been waiting for these guys to reunite on a record for what feels like forever and it's all nostalgic AF.

Anyway, check out some of these tweets:

If you want to keep chasing happiness — and I know I do! — the Jonas Brothers Happiness Begins Tour kicks off tomorrow on June 8. The boys will play 40 gigs starting tomorrow in London, England, then their tour will end on Oct. 20 at Los Angeles’ Hollywood Bowl.

Oh, and did I mention that brothers also have a documentary out over on Amazon Prime? So to recap, you can watch them in their new movie, purchase tickets to see them on the Happiness Begins tour, and then go score this amazing new album.

Yup, the boys are everywhere. And nobody is sorry about it.

More like this
These Tweets About BTS' "Film Out" Video Are Filled With So Many Questions & Theories
By Michele Mendez
Is Taylor Swift's "Mr. Perfectly Fine" About Joe Jonas? Sophie Turner's Instagram Has Fans Curious
By Brandy Robidoux
These Tweets About Taylor Swift's "Mr. Perfectly Fine" All Ask 1 Important Question
By Sydney N. Sweeney
Stay up to date