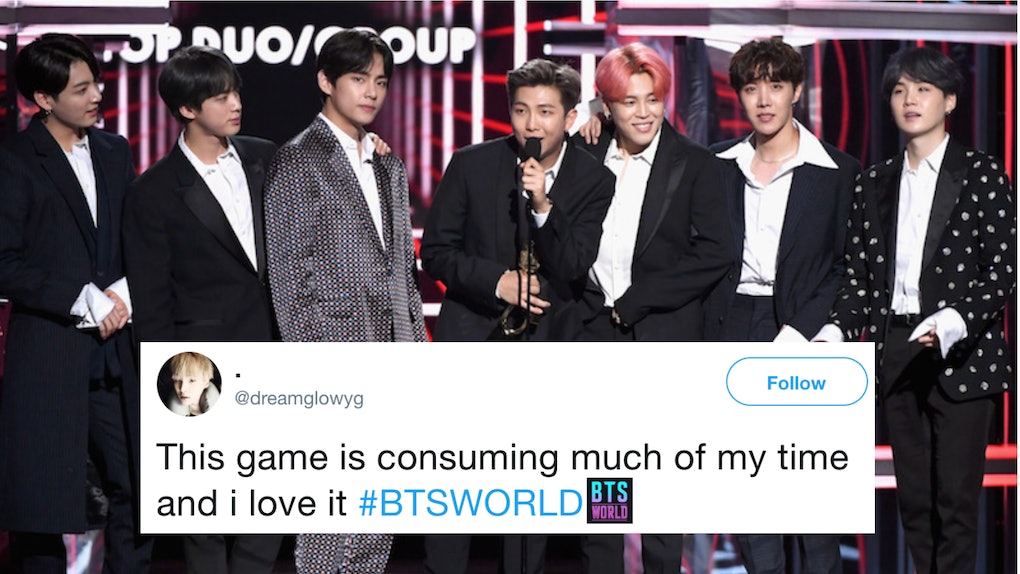 BTS ARMYs woke to a new day on June 26. That's because the new BTS World mobile game was finally released and now there's nothing to be done but obsess over it. The tweets about BTS World show ARMYs are dropping everything (school, work, basic bodily functions, eating, sleeping, and breathing) to play the highly anticipated game — which means, somewhere, J-Hope, Jimin, Jin, Jungkook, RM, Suga, and V must be high-fiving. Inducing mass fan hysteria is kind of their thing.

The game itself puts players in the position of BTS' manager — aka, a real dream role for most ARMYs. It is their job to help the young idols thrive and grow into the world-renowned phenomenon they are today. The game begins in 2012, prior to BTS' global success, and the gamer works with the boys towards inevitable stardom. Bonus, it also features a soundtrack and lots of videos and photos.

Players will encounter various missions where they will select certain BTS member cards to clear the mission and progress through the game. Collecting and upgrading these cards will open up even more stories along the way, and players will be able to interact virtually with BTS in the game through a 1:1 interactive system.

The boys even gave players some managerial advice, too. In one BTS World teaser video, all seven members talked about what they think it takes to be a good manager.

Jungkook thinks it's as simple as having flexibility, where some of the other boys have more specific requests. For example, V needs someone who is open to using "physical force" to wake him up in the morning, if need be. Jimin would love someone who can basically read his mind, and Jin requests lots and lots of chocolate milk in his dressing room. (Seems reasonable.)

ARMYs heard their cries loud and clear and are going wild with the game trying to be the best managers these boys could ever ask for. There's just one teeny tiny issue... ARMYs can't seem to focus on or do anything else once they start playing. Like, at all.

Check out some of these tweets.

You guys get the idea.

Other tweets show fans are desperate to win the boys over and panicking about not being able to log in correctly so they can soak up all the gaming goodness. There is also a wide ARMY friend code exchange happening so you can link up with other fans and play together.

BTS World is just the latest step in the idols' mission to take over the world. The game comes hot on the heels of other BTS-tastic industry moves like their BT21 x Uniqlo t-shirt collaboration, the launch of ARMYPEDIA.net, and the announcement of a new concert film Bring The Soul.

So, if you aren't lost in BTS World trying to wake V up from a deep slumber, there are plenty of other opportunities and ways you can obsess about your boys elsewhere.