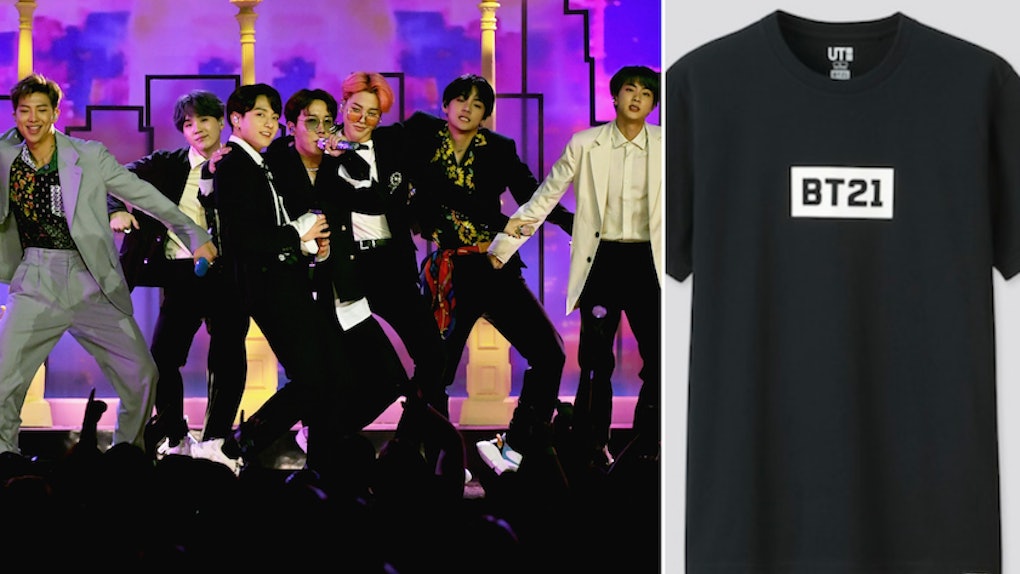 It could be that I've just never paid as close attention to any other celebrity in my life the way that I've paid attention to BTS, but these guys are seriously taking over the world. That's not hyperbole. I'm dead serious. From building out entire virtual worlds, to optimizing social media platforms, to setting music records, there is hardly an industry or resource out there that BTS hasn't laid its perfect hands on. Now, they're coming for the fashion world via Uniqlo and ARMYs are hyped. Here's how to get BTS' BT21 x Uniqlo t-shirts so you can keep the finger hearts a-comin' and rep your bias' LINE FRIENDS character everywhere.

Here's the skinny: BTS joined with LINE FRIENDS in 2017 to create BT21. LINE FRIENDS is described as a collaboration between the messaging app LINE and various global artists to create characters and products for adoring consumers and fans to devour everywhere. BT21 includes eight animated characters lovingly designed by J-Hope, Jimin, Jin, Jungkook, RM, V, and Suga. The characters each represent one BTS member and famously go by the names TATA, MANG, CHIMMY, RJ, KOYA, COOKY, SHOOKY, and VAN. (It's worth noting that VAN is the eighth BT21 character that's not based on a member. They're the gray and white robot-looking thing, and according to the BT21 website, they protect BT21 24/7. Which means they're basically ARMY.)

Beginning on June 21, fans can just jump online and/or stroll into any physical Uniqlo store and browse the twelve perfect t-shirts available to purchase at the super chill cost of $14.90. (Doesn't that sound, like, really affordable?) Check out some of these joyful designs!

If you pop over to Uniqlo's website, you're able to read a little more about the birth of BT21 x Uniqlo and learn about the purchase and return policy, too. Uniqlo's site explains:

BT21 is the first project of LINE FRIENDS CREATORS. It’s a new IP created through the collaboration between LINE FRIENDS and BTS. BT21 consists of eight different charming characters created by BTS members, who all actively participated in the whole process from drawing sketches to execution.

There are two designs for Jimin, Jungkook, and V's characters, CHIMMY, COOKY, and TATA, while there's only one design for RM, J-Hope, Jin, and Suga's characters, KOYA, MANG, RJ, and SHOOKY (what gives?). The last two shirts in the line are general BT21 shirts.

There's a stipulation that both online and in-store t-shirt purchases are limited to one item per size/color/pattern per customer. A little bossy, but I get it. If the brand left this sh*t wide open for any ARMY to come in and just scoop up all the CHIMMY shirts available then there wouldn't be any for the rest of us. It'd be like Black Friday sales at Walmart but even more destructive thanks to the inherent ARMY strength that lives in all of us.

Anyway, mark your calendars. Friday, June 21 is rapidly approaching and it's better to have a game plan going into this product launch than to just throw yourself at the BT21 shelves and hope you land on your own bias t-shirt.

Thank you for the endless gifts, BTS! The music, the clothing, the concerts, the games, the stickers, the photos, the videos... you guys get it.

More like this
Here's Why Harry & William Will Not Walk Together At Prince Philip's Funeral
By Brandy Robidoux
Are Meghan & Harry Getting Paid For Their Netflix Show? Here's The Deal
By Sydney N. Sweeney
Here's How To Stream 'Nomadland' So You Can Finally Get The Hype
By Rachel Varina
Stay up to date