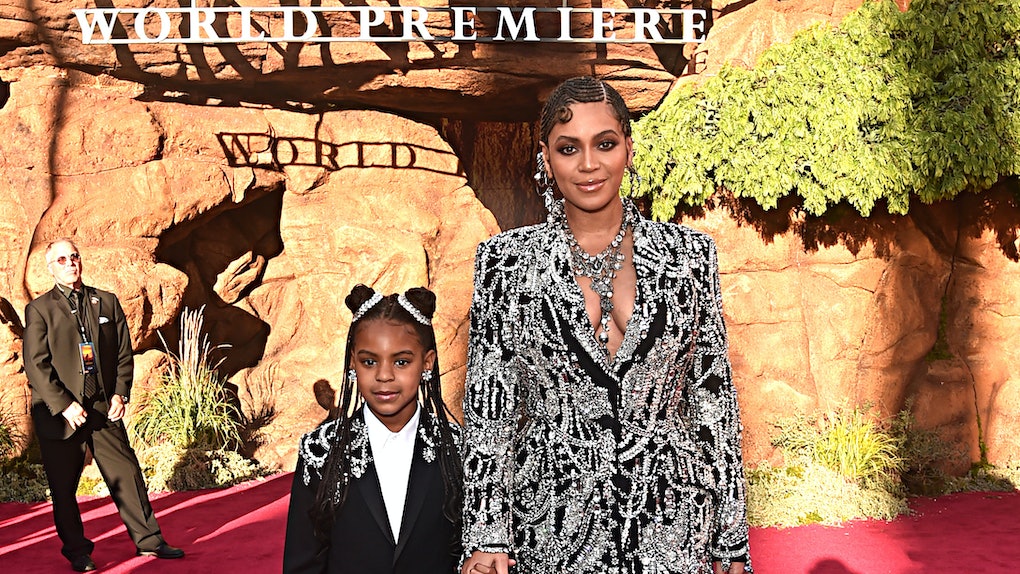 These Tweets About The 'Beyoncé Presents: Making The Gift' Special Are All About Blue Ivy

Beyoncé is the gift that keeps on giving people. Queen Bey isn't done with July 2019's The Lion King, so she decided neither is the Bey Hive and released Beyoncé Presents: Making The Gift, a special documentary that gives fans a behind-the-scenes look into the making of her Lion King companion album The Gift. It dropped today, so obviously her fandom is going bananas. Like, these tweets about Beyoncé Presents: Making The Gift special that are gushing over Blue Ivy, because she seriously steals the show.

The magic of Jon Favreau's The Lion King remake would not have been the same without Bey's incredible voice behind Nala and in a few songs on the official soundtrack (in addition to The Gift). Remember when Disney released a promo featuring the track "Can You Feel The Love Tonight" with Beyoncé and Donald Glover on June 20? The internet was taken aback by their very distinct and beautiful voices harmonizing together so melodiously. Then, when Bey released "Spirit" on July 16, her fans were bowled over once again. The new track and its accompanying video were incredibly moving works of art. The lyrics were so powerful. They emphasized finding empowerment even in the darkest of times while the video featured the most stunning visuals known to man. Yep, that's a completely true fact in the Bey Hive encyclopedia. But seriously, Beyoncé continues to amaze fans again and again.

After that, she dropped "Brown Skin Girl" from The Lion King: The Gift. The song paid homage to melanin queens everywhere with the lyrics giving special shout-outs to Naomi Campbell and Lupita Nyong'o. The track then inspired a viral trend called the #brownskingirlchallenge in which women of color celebrated their skin across the internet by dancing and singing along to the catchy tune on social media. It was truly revolutionary for the culture. Now, Bey is giving the fandom an exclusive look into the making of her own Lion King album. It's truly a gift and the Bey Hive knows it. Just look at the tweets from these fans who can barely contain themselves.

Fans were especially blown away by how absolutely fierce Blue Ivy was throughout the whole special. She stole viewers' hearts dancing to her mom's music and singing "Brown Skin Girl." Blue and Beyoncé sang and danced to their original song "Mood 4 Eva" together, and believe me when I say it's a bop. The music video-esque montage that accompanied the song was so many levels of wholesome and mother-daughter goals that I could watch it non-stop for the rest of the day and never get tired of it.

They actually joked that Blue Ivy was so good (she even rocked a bit of vibrato in her vocals) that she was the one featuring Queen Bey in her music video. There's definitely a reason Beyoncé calls Blue her "beautiful queen."

Check out the tweets below:

I think it's safe to say that Blue Ivy is "Beautiful Queen" to all of us now! We do not deserve her or her mother!

More like this
These Tweets About BTS' 'Bang Bang Con 2021' Sum Up The Epic Performance
By Cianna Garrison
These Tweets Comparing SuperM's "We Do" To BTS' "Dynamite" Video Are So Split
By Michele Mendez
Why Did Addison Rae Deactivate Her Twitter? Fans Think This Is The Reason
By Brandy Robidoux
Stay up to date