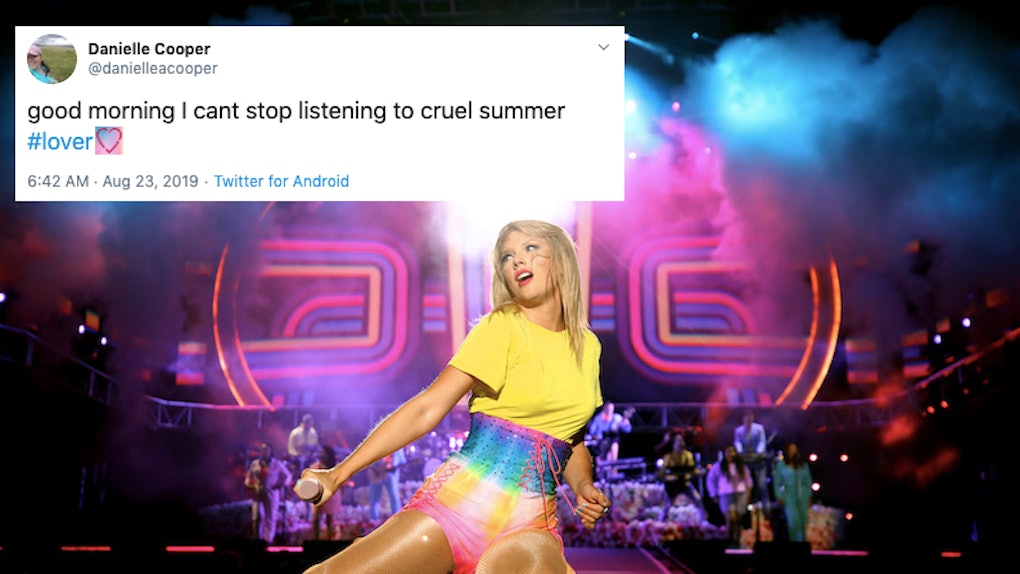 These Tweets About Taylor Swift's "Cruel Summer" Prove It's A Jam

It's official, world. Taylor Swift's latest and greatest album Lover is here and naturally, her fans are calling in sick so they can wrap up their work week rocking out to its melodies. The album dropped on Friday, Aug. 23, and with it came a whole slew of songs fan's have only heard about up until now. One of them is the new hit "Cruel Summer," which first appeared as an easter egg in the "You Need To Calm Down" music video as a tattoo on Ellen DeGeneres' arm. The tweets about Taylor Swift's "Cruel Summer" prove it's a serious jam.

Here's the thing. Even if Swift dropped all of her albums on Christmas Day in the dead of winter, I'd feel like summer is still her season. 2019 is no exception. When Swift first announced she would be dropping a new album after the raging success of Reputation, I didn't know what to think. Then I caught onto all of the candy-coated marketing and I realized, "Ah, yes. The next step of her evolution." While she previously identified as a slithering snake in the Reputation era, she is now a rainbow-hued butterfly here to bring us bops like "Cruel Summer."

The song itself evokes nostalgia, which is kind of Swift's speciality. Even though it's a new song that you've never heard until now, it feels familiar in a way that only a once-budding country star could really capture.

Words like, "Fever dream high in the quiet of the night, You know that I caught it / Bad, bad boy shiny toy with a price, you know that I bought it / Killing me slow, out the window / always waiting for you to be waiting below / Devils roll the dice, angels roll their eyes, what doesn't kill me makes me want you more," have me imaging a car ride with the windows down, a soda in my hand, and my high school boyfriend in the passenger seat. (Honestly, it looks a lot like the scene I picture when I listen to Swift's 2006 hit "Our Song," too.)

Twitter has a lot of feelings about the new track, and they all kind of conclude one thing. It's fire.

Along with "Cruel Summer," fans are finally getting all the answers to the rest of their Lover questions, too. Let's be real, Swift did a number on everyone with all of the easter eggs she hid in the music video for "You Need To Calm Down."

It doesn't take an expert to figure out a good chunk of these tunes must have been influenced by her relationship with Joe Alwyn. "London Boy," for example, can only be interpreted in so many ways. The song "False God" ended up being a moody love ballad, too (and not the politically-charged tune some speculated it might be).

All in all, I think 2019 ended up being more of "sweet summer" for Swift, but then again, I'm not in her sequined shoes.

More like this
What Does Taylor Swift's Vault Door Video Mean? Fans Are Decoding It
By Cianna Garrison
These Tweets About Taylor Swift's "Mr. Perfectly Fine" All Ask 1 Important Question
By Sydney N. Sweeney
Taylor Swift's 'Fearless (Taylor's Version)' Lyric Changes Are Small, But Meaningful
By Michele Mendez
Stay up to date