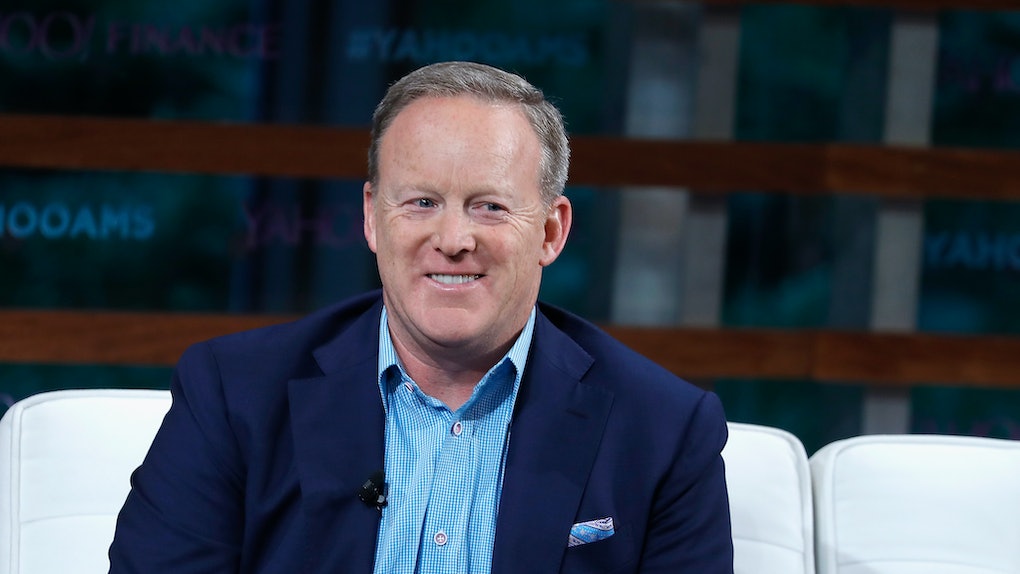 These Tweets About Sean Spicer On 'Dancing With The Stars' Ask, "Just, Why?"

You probably best remember Sean Spicer for his days in the White House briefing room as the founding founder of “alternative facts.” His latest announcement, though, is unfortunately entirely true. The former White House press secretary is soon to make his reality television debut, and the tweets about Spicer on Dancing with the Stars are far from excited. Seriously, everyone just wants to know, why?

The television network announced this season’s cast on Aug. 21, with a video in which Spicer walks out to a Good Morning America podium, parodying his previous employer’s press briefing room, and waves to the crowd. He shared the news immediately, on his own Twitter, writing: "It's time to have some fun. Excited to join a great cast and show." It's an odd fit for the former press secretary: Dancing with the Stars, which first premiered in 2005, pairs celebrities with professional dancers to battle it out as teams until one team is ultimately named the dance champion. The 28th season will premiere Sept. 16.

However, maybe not all that odd. Given the drama and reality-TV quality of his time in the White House, maybe he's ready for more reality TV. "There's something for everyone in the cast, young and old," said Executive Producer Andrew Llinares, according to USA Today. "There's people from the world of sports, music, acting, all sorts of different areas."

Other cast members for the 2019 season include basketball player Lamar Odom (possibly more well-known for being married to ex-wife Khloé Kardashian), former Fifth Harmony member Ally Brooke, and Queer Eye's Fab Five member Karamo Brown. This might be the weirdest combination of people to grace reality TV, not to mention that they’re going to do it dancing. But Spicer is definitely the cherry on top, and the internet is not too thrilled that he's back in the public sphere.

Spicer courted his fair share of controversy (and memes) during a brief tenure at the White House from January to July 2017. Some highlights include when he kicked off Trump’s presidency with viral claims that the president gathered the “largest audience to ever witness an inauguration” (he didn't). Or, when he said Adolf Hitler never used chemical weapons (he, uh, very much did). Or, when he seemed to imply that Trump’s “covfefe” typo was some sort of insider White House secret. (That, we may never know.)

Spicer later apologized in an April 2017 CNN interview for his “appropriate and insensitive reference to the Holocaust.” More recently, in January 2018, he expressed regret in a CNN interview about his misleading inauguration statements. In A Sept. 2017 interview with Good Morning America, he added that he had never "knowingly" lied to the American public.

Now, with Spicer's sudden return, people are calling out ABC for restoring him to national attention, and normalizing someone who spread false information and defended controversial policies. Elite Daily reached out to ABC for comment or response, but did not immediately hear back.

Some were quick to call out the network for promoting a "redemption tour."

Others just seemed a little excited to make fun of him for the first time in a while.

And, of course, revive the Spicey memes.

It’s been a good while since that 2018 CNN interview, when we last heard from Spicey: "There were times where I screwed up,” he said at the time. “There’s no question about it.”

His DWTS debut is probably an attempt to undo that, but Spicer hasn't always had the best luck in terms of redemption tours. I'd say that there's a good chance he'll be looking back on this next year, adding it to his list of regrettable screw-ups. Best of luck with that fox-trot, Spicey!