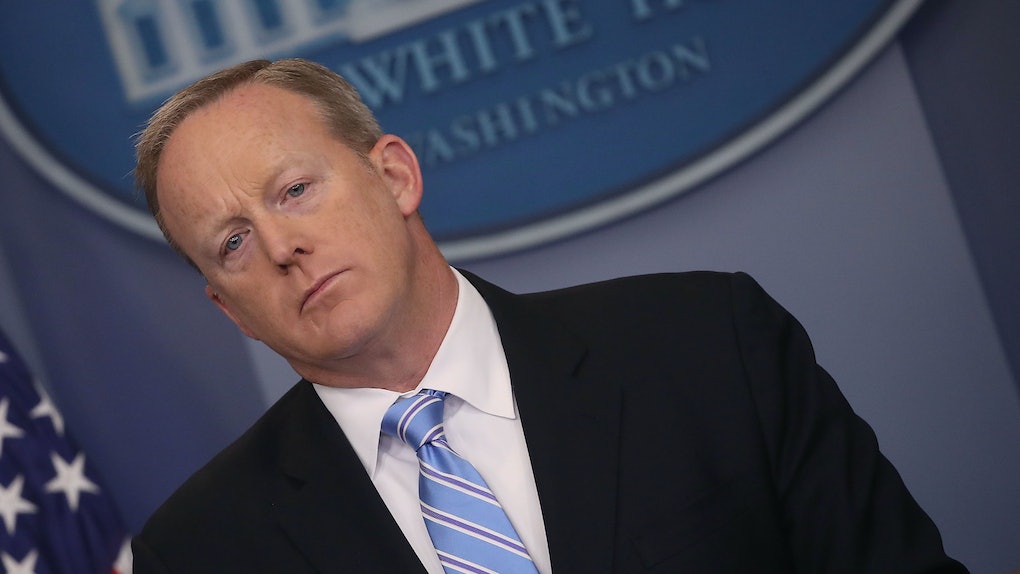 During a Thursday, Jan. 4, primetime interview, former White House press secretary Sean Spicer said he "screwed up" as press secretary on multiple occasions during his tenure under President Donald Trump. Spicer made the remarks in conversation with S.E. Cupp, the host of SE Cupp Unfiltered on the CNN-owned cable news network, HLN. Spicer also discussed other topics during his interview — like a newly released and publicized book about the White House — but not before citing specific areas in which he says he made big mistakes while serving as press secretary.

"There were times where I screwed up," Spicer told Cupp. "There’s no question about it."

One of the instances Spicer and Cupp discussed was the press briefing during which, while trying to condemn Syria president Bashar al-Assad, Spicer erringly said Adolf Hitler didn't use chemical weapons.

"We didn't use chemical weapons in World War II. You know, you had a, you know, someone as despicable as Hitler who didn't even sink to using chemical weapons," Spicer told reporters last April. "So you have to if you're Russia, ask yourself: Is this a country that you, and a regime, that you want to align yourself with? You have previously signed onto international agreements, rightfully acknowledging that the use of chemical weapons should be out of bounds by every country."

During his interview on Thursday night, Spicer revisited the episode. "There was an event where I was trying to talk about how evil Assad was, and I screwed that up royally," he told Cupp.

Among other instances in which Spicer says he "screwed up" was his press conference that took place after President Trump's inauguration, during which he asserted that Trump's inauguration had the largest audience ever. While Spicer said he regretted framing the information the way he did, he argued against the idea that he had flat out lied.

"What I said is ‘the largest audience to ever witness an inauguration in person or around the globe,’" Spicer told Cupp. "The fact of the matter is that there are platforms like Twitter and Facebook and Instagram that were not available in previous administrations."

Sean Spicer's tenure at the White House ended in July 2017 following Trump's hiring of Anthony Scaramucci as communication director. During his interview on HLN, Spicer said he's enjoyed his time since leaving the White House — pointing out that he gets more sleep — but also reflected on the worst feelings that came with serving as press secretary.

"When I screwed up, it felt really bad," Spicer told Cupp. "Because you are realizing that you're tarnishing your personal reputation, your family's reputation, your friends who like you and support you. You know, some of your colleagues and ultimately again, this administration and the American people who I wanted to do my best job, my best for every single day."

While speaking to Cupp, Spicer also questioned the authenticity of a newly released book about the White House, Michael Wolff's Fire and Fury: Inside The Trump White House.

Before Spicer's interview, excerpts of Wolff's book had been published by multiple outlets within a span of days, garnering interest around the work itself while prompting the president to deliver a rebuke of his former chief strategist Steve Bannon.

Spicer told Cupp that the book has some "interesting" narratives, but also cited reasons why he said it shouldn't be taken at face value.

"There's a lot of the quotes that I know are attributed to myself and to other people that frankly never happened," Spicer said, before later adding, "There is no question that the accuracy of this book is definitely in question."

Spicer's thoughts about Wolff's book, and the interviews that led to it, fit in well with the theme of his interview with Cupp: questioning what went on during his time at the White House.