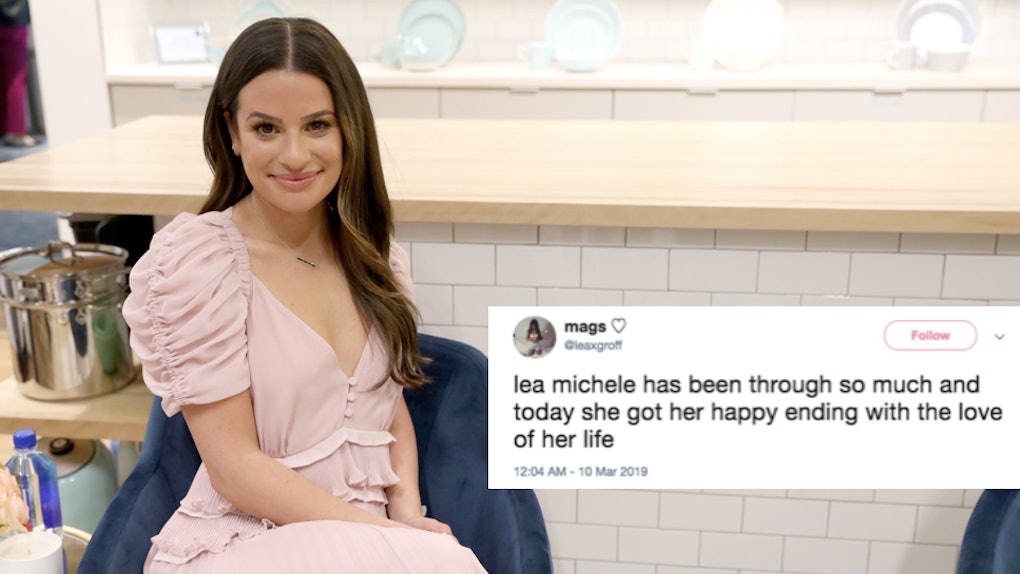 If anybody in this world deserves lifelong happiness, it's hands down singer, actress, and gorgeous goddess Lea Michele. It basically goes without saying the beautiful and incredibly talented celebrity has gone through a lot over the last several years, so it overjoys me (and evidently the rest of the Twitterverse) to hear that she just got married to the love of her life. That's right, and if you haven't already taken a look at these tweets about Lea Michelle and Zandy Reich's wedding, make sure to do so as soon as you can. They show that each and every one of her fans are so here for it. Elite Daily reached out to Michele's representation for further comment on the nuptials, but did not hear back at the time of publication.

Attention, my fellow Gleeks, as well as any and all Lea Michelle fans: The actress finally married her one true love Zandy Reich, according to People, and I truly feel as though all is right in the world. The 32-year-old actress and the 36-year-old president of AYR clothing company dated for about two years before getting engaged on April 29, 2018, and officially tying the knot on Saturday, March 9 in a small, intimate ceremony up in Northern California, as reported by Entertainment Tonight. Apparently, the actress' friends from Glee, Darren Criss and Becca Tobin, as well as former Scream Queens co-star Emma Roberts showed up... so clearly, I'm experiencing some major FOMO right about now.

Anyway, like I said, Twitter is celebrating Michele's big day from the comfort of their couches (even without that invite). And as you could probably imagine, I am cheering on the singer right there with them. Definitely make a point to read through some of Twitter's overjoyed response below, and make sure you have a tissue and a box of tissues in plain sight. There's no doubt in my mind you'll end up shedding some happy tears for the happy (and now married) couple.

OK for real, though: What did I tell you? Tweets like these make me feel like there's actually a sliver of humanity in this cruel, cruel world. TBH, the reactions are super sweet.

The Glee star's maid of honor is a highly recognizable face — the singer posted a photo to Instagram featuring former Glee co-star Jonathan Groff, along with the caption "Maid of honor" and a double pink heart emoji. While the maid of honor role is traditionally awarded to a close female friend or family member, this is — by far — the cutest idea yet. The two have been friends for over 10 years (yes we're getting that old!), and there's no doubt in my mind Groff would plan a sick bridal shower and bachelorette party.

It's no surprise that fans are rallying around Michele on her special day. Fans of Glee will remember that her costar and former boyfriend Cory Monteith died due to a reported drug overdose in 2013. There is no doubt that was a devastating time for Michele, and her fans have been lifting her up ever since. So, of course it brings Gleeks everywhere so much joy to hear that Michele has found love once again. Sending so much love to the happy couple, because they both totally deserve it.