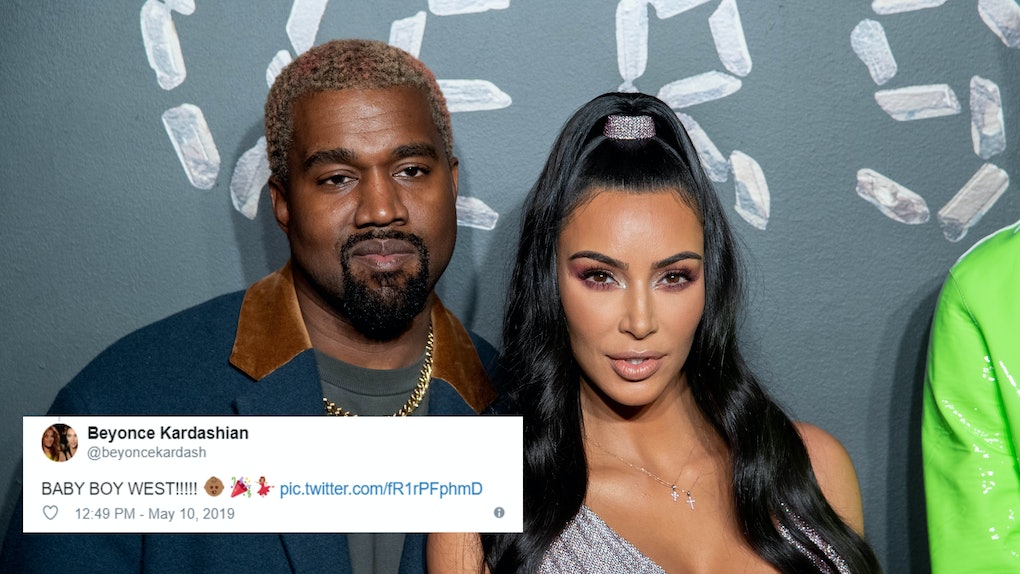 Kim Kardashian and Kanye West have welcomed their fourth child, and fans all over the world couldn't be more excited for the couple. When news broke that West and Kardashian's fourth child was born, fans immediately started tweeting about it. All the tweets about Kim Kardashian's fourth baby are really sweet, and seeing as there will likely be a wait before pics or a name is released, let's catch up on all the details about the bundle of joy.

Back in January, People confirmed that Kardashian and West were expecting their fourth child via surrogate. Although she gave birth to her first two children, North, 5, and Saint, 3, Kardashian's experience with placenta accreta caused the family to turn to a surrogate for the pregnancy and birth of Chicago, now 1. The world was already anticipating the arrival of Baby 4 thanks to Kourtney Kardashian's surprise announcement on Kris Jenner's Thursday appearance on The Ellen DeGeneres Show. With her three children and Kardashian's brood in tow, Kourtney revealed that Kardashian's surrogate was in labor, putting fans on baby watch.

Kardashian then tweeted on May 10 that she and West had welcomed a baby boy into their family. After announcing his arrival, Kardashian said in a follow-up tweet, "He’s also Chicago’s twin ... I’m sure he will change a lot but now he looks just like her."

Aside from the excitement from the new mother of four, fans on Twitter simply couldn't contain themselves. I've barely recovered from the arrival of Baby Archie, but it looks like another deep dive into congratulatory tweets is how I'm spending the day. No complaints here!

Everyone is clearly over the moon for Kardashian and West. It's an exciting time for the Kardashian-Jenner clan, but their followers are just as invested in this new arrival as the family is. As soon as Kardashian confirmed her son's birth, fans began asking about his name. She previously opened up about possibly naming him Rob after her father and brother, but as the mogul pointed out, it didn't quite fit in with the rest of her kids' names. However, during a family vacation to Bali that was captured on Keeping Up with the Kardashians, a psychic told Kardashian her son would be the reincarnation of the late Robert Kardashian. If that's not a good enough reason to name your baby that, what is?

If they don't go with Rob, she and West can always scroll through Twitter for some more suggestions.

Just as the world had to wait a few days for Prince Harry and Meghan Markle's baby name, fans probably have to get comfortable while waiting for the new West baby's name. As of Friday afternoon, the other family members have yet to commemorate the baby's arrival on social media, but it's likely only a matter of time before the Kardashians unite in full force to celebrate the new baby.

Congrats to Kardashian, West, and their kids! Enjoy your full house this Mother's Day.

More like this
These Tweets About Jimmy Fallon's TikTok Dance Follow-Up Segment All Say It's Too Little, Too Late
By Brandy Robidoux
These Tweets About Taylor Swift's "Mr. Perfectly Fine" All Ask 1 Important Question
By Sydney N. Sweeney
Travis Barker's Instagram About Sex With Kourtney Kardashian Will Make You Blush
By Candice Jalili
Stay up to date