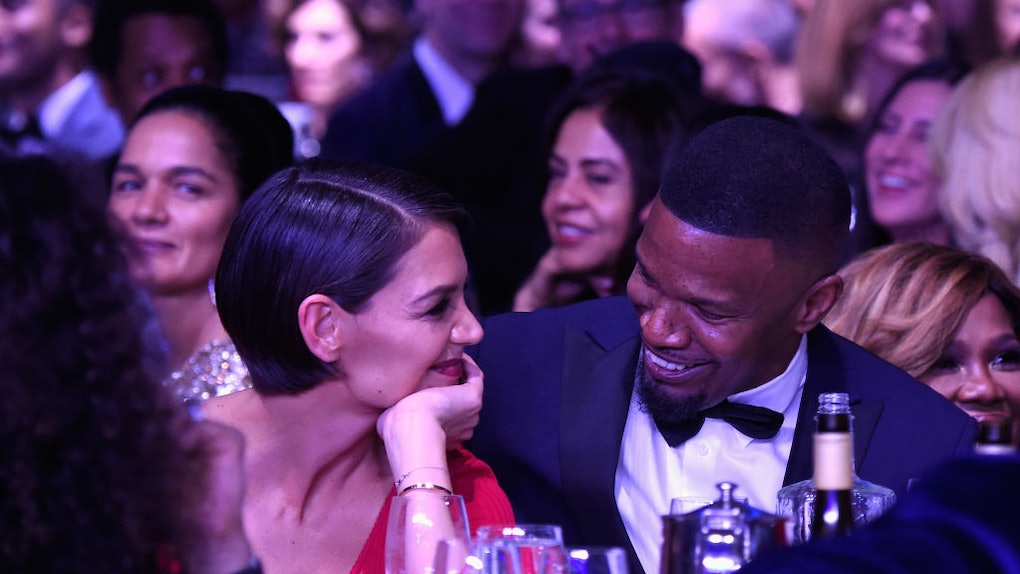 On Aug. 19, Us Weekly reported that Jamie Foxx and Katie Holmes ended their relationship, and if you're scratching your head all "WTF?" because you didn't even know they were together, you're not alone. Over the course of their six-year relationship, they were occasionally spotted out together in public, but neither ever verbally confirmed they were dating. Considering they were together for such a long time, that's pretty darn impressive. In fact, they did such a good job at keeping it low-key, these tweets about Katie Holmes and Jamie Foxx's reported split prove everyone is confused AF.

A source reportedly confirmed the news of the split to Us Weekly after Foxx was spotted out and about with two different women (neither of which was Holmes) earlier in August. And while Us Weekly also reported that Holmes was the one who reportedly ended their relationship, it seems as though she called it off months before Foxx was spotted with the other women. Holmes reportedly told a friend, "What Jamie does is his business — we haven’t been together for months," according to Us Weekly.

Holmes and Foxx have been pretty private when it comes to their relationship (as these tweets joke about), and have only ever posed for cameras together once. At the 2019 Met Gala, while the couple didn't stop and pose outside, they did smile and take photos inside, which they hadn't really ever done. Sadly, that seems to be the last time the pair were spotted together, per Us Weekly, and if it's true that Holmes said they haven't been together in months, the Met Gala could have been their last event together.

Still, it's sad to hear the sweet pair are reportedly no longer together. Holmes and Foxx made for not only a gorgeous couple, but also one that seemed super end-game. So, whether you're confused about the fact that they were an item in the first place, or just genuinely sad that their relationship has reportedly ended, these tweets about the whole situation will make you say, "lol same."

Ugh, why do all good things have to come to an end? Honestly, between this and the Miley Cyrus and Liam Hemsworth breakup, I'm not sure my heart can take any more sadness.

Of course, it makes sense that Holmes, in particular, would want to keep the relationship on the down low. After all, she had a very public relationship and breakup with Tom Cruise. ICYMI (and understandably so, it was a long time ago), Holmes and Cruise were together for seven years, from 2005 to 2012, and share a daughter, Suri Cruise. Remember when Cruise made a shocking appearance on The Oprah Winfrey Show announcing his love for Holmes back in 2005?#TBT. Honestly, who wouldn't value their privacy after a saga like that?

But as funny as all these tweets are, it's also important to remember that Holmes and Foxx are still real people, and breakups usually aren't fun for anyone. Fortunately, these two are pretty good at keeping things private, so chances are, things will stay that way. Here's hoping they both find love and happiness again!