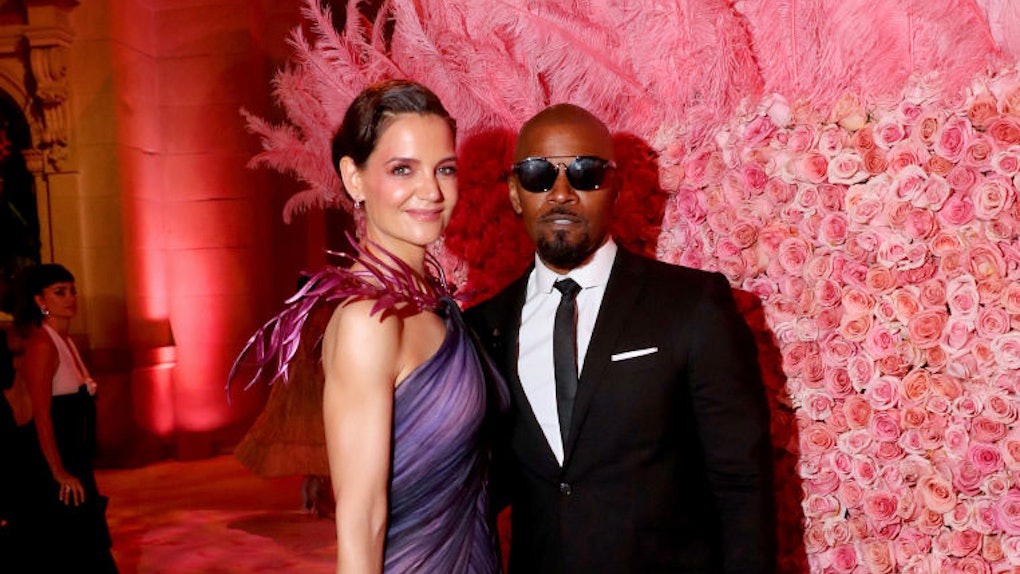 Jamie Foxx & Katie Holmes Attended The Met Gala Together, & They Made Such A Gorgeous Pair

Hollywood couples generally make an effort to keep their private relationships on the down low, which is totally understandable. Paparazzi follow them everywhere, and it has to be hard to get some privacy. But no other couple in Hollywood is as skilled in the art of playing coy as Jamie Foxx and Katie Holmes. The two have stealthily been avoiding cameras for a reported six years now, but their love for each other is clearly very real. On Monday, May 6, Jamie Foxx and Katie Holmes attended the Met Gala together — making a rare public appearance — and I was almost as shook at seeing them together as I was at seeing Katy Perry's chandelier dress.

While Foxx and Holmes didn't pose for the cameras together outside the Gala, they did stop for photos inside the Met, with their hands around each other, and big smiles for the cameras. (They rarely do this!) It was a perfect moment for the two lovebirds, who prefer to keep things quiet.

Believe it or not, Holmes and Foxx have reportedly been romantically linked since 2013 — six years now — but no one would know it because they rarely step out together. Elite Daily reached out to representatives for both Holmes and Foxx for confirmation on their relationship timeline, but did not hear back in time for publication. Honestly, after Holmes' super public relationship and subsequent breakup with Tom Cruise, it's understandable that she would want to keep her relationships private moving forward.

So, in honor of finally seeing these two out together again, let’s take a look back at their sweet romance, because they’re a seriously underrated couple.

According to Entertainment Tonight, Holmes and Foxx reportedly first started dating in August 2013, but they kept it very much on the DL. Per the site, Foxx had been spending a lot of time at Holmes’ apartment in New York City following her 2012 divorce from Cruise. However, in October 2013, Foxx told Entertainment Tonight that the rumors were not true. “"[The rumors] are one hundred percent not true," he said. "In fact, it's quite hilarious because we simply danced at a charity event along with a lot of other people."

In March 2015, Us Weekly reported that Holmes was spotted at Foxx’s birthday party, and in August 2016, they reportedly attended a Barbara Streisand concert together. But it wasn’t until January 2018 that they made what one could call their "public debut" at a Pre-Grammys Gala in New York City. Us Weekly, reported that they were laughing and whispering together all night. Flash-forward to now, and couple seem to be getting more comfortable with showing off their love. (Crosses fingers.)

Sure, they didn’t rock the red carpet as a couple, but they still embraced each other and posed together inside. If the they did, in fact, start dating in 2013, they’ve been together for over half a decade, which is almost as long as Holmes' relationship with Cruise. Here's hoping this is just the beginning of more Holmes and Foxx appearances together, because there's no denying these two make a stunning pair.

More like this
Katie Thurston's Ex Joked About Her 'Bachelor' Entrance In His Stand-Up Act
By Corinne Sullivan
Phoebe Dynevor & Pete Davidson Were In England Together & They Look So Happy
By Lydia Wang
Are Jennifer Lopez & Alex Rodriguez Getting Back Together? He Reportedly “Won’t Give Up”
By Candice Jalili
Stay up to date